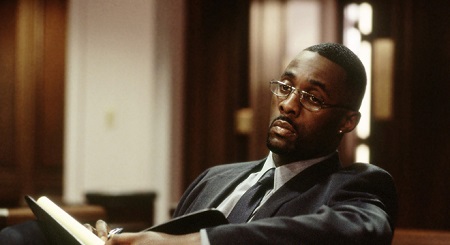 Having never watched HBO’s The Wire yet having to endure over and over and over (and over) again just how brilliant and amazing creator David Simon’s landmark television program was, I admit I was fully prepared to be slightly underwhelmed when the complete series Blu-ray collection arrived on my doorstep for review. Thankfully, that wasn’t even remotely the case. If any show has ever lived up to the hype, and said hype is considerable (the box art even includes a MSNBC quote calling it “The best show in the history of television”), this has been the one.

Greatest television program I’ve ever watched? Not sure I’d go that far, need to marinate on it a bit longer before I could even come close to saying something like that. But it is brilliant. It is amazing. It is continually fascinating, filled with dramatic and emotional beats that grabbed me by the throat and refused to let go. In point of fact, all I wanted to do when the final episode ended was go back to Season One and start watching it all from the very beginning now knowing exactly what was going to happen and when, the saga Simon and company weave as epic, intimate and mind-blowing as anything I’ve ever had the pleasure to experience.

More than cops and robbers, more than just a litany of terrific performances by a who’s who of spectacular actors (including Idris Elba, Wood Harris, Dominic West, Lance Reddick, John Doman, Clarke Peters, Sonja Sohn, Frankie Faison, Aidan Gillen and very young Michael B. Jordan), as Simon intended it is a story of a city in crisis, a variety of characters (some good, some bad, all navigating in various shades of grey) going at one another over and over again in a battle for its soul. It’s fascinating stuff, each season building on the next in ways that are continually riveting. 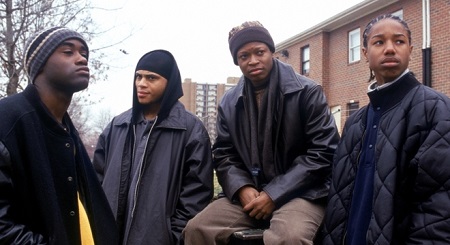 In the end, the great thing about the show is that, not only does it make Baltimore its own utterly distinct and completely compelling character, it also manages to showcase with driven, elegantly unsettling subtlety that any city in the United States could be the home for stories just like these. Simon and his talented cadre of writers show the universality of the themes they are tackling, themes and concepts that have only become even more tragically obvious in light of recent events in locations as diverse as Ferguson, Charleston, New York and, sadly, Baltimore itself. They were oddly and unnervingly prescient in how they looked at law enforcement, race relations and politics, and its downright depressing in some respects just how spot-on the show has proven itself to be.

Be that as it may, The Wire remains one of the great police procedurals of our time. It’s influence is still being felt seven years later after the final episode aired, and as great and as amazing as programs like Justified, Breaking Bad and True Detective have proven to be there’s a reason this is the one so many keep talking about in hushed tones and awe-struck reverence. Magnificent.

This complete series presentation of HBO’s The Wire is showcased on 20 dual-layer 50GB Blu-rays with MPEG-4 AVC encodes and 1.78:1 1080p transfers. There has been a little in the way of controversy in regards to HBO’s and creator David Simon’s decision to release this series to Blu-ray in a Widescreen format, all seasons originally airing Full Frame in the 1.33:1 format. HBO’s statement in regards to this decision is as follows: 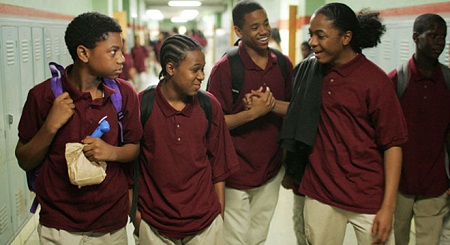 “The entire series has been beautifully re-mastered in 16×9 Full-Frame HD from more than 8,000 reels of original 35mm camera negative, allowing for a tighter fit on widescreen TVs and computer/tablet screens. The original negatives were scanned, edited, dust-busted and color-corrected with great care and attention taken to stay true to the look and feel of the original Standard-Definition 4×3 version.”

Having never watched the show, I do not know what it looked like during its original airing. What I do know is that this hi-def remastering is spectacular, and for my part I had no problems with it whatsoever.

All of the extras from the previous DVD releases are ported over to this complete series Blu-ray collection. There is only one new extra produced for this set. Thankfully, it’s a doozy:

The Wire Reunion – This two-part, nearly 90-minute reunion special recorded at PaleyFest in October of 2014 is outstanding. While Idris Elba and Dominic West are absent (they do send pre-recorded apologies), plenty of key members of the cast and crew, including creator David Simon, are on-hand to talk about their experiences bringing this landmark television series to life. It’s a fantastic extra, one fans of the series are going to find suitably engrossing.

A Digital Copy of the complete series is also included with the release.

I’d never watched HBO’s The Wire before receiving this complete series package in the mail for review, I now can’t imagine living in a world where it does not exist. Living up to the hype, I get why many consider this the greatest series in the history of television. Not sure I’d go that far, HBO’s Blu-ray presentation is still suitably extraordinary, and I urge interested parties to add it to their collections at their earliest possible convenience.