Will there be a worse movie made in 2012 than This Mean War? Yes. Without question. Will there be one as clumsy, so poorly plotted, so clueless, so awkwardly developed and sp carelessly thought out? Who knows, but I find it doubtful, director McG’s (Charlie’s Angels, Terminator Salvation) shockingly inept. Wasting stars Reese Witherspoon, Tom Hardy and Chris Pine in the process, this is a bad flick made worse by the potential rusting away to nothingness lurking at its center, and all I could think while sitting in the theatre was how no one noticed just how wrongheaded all of this was during production when they could have put a stop to it right then and there. 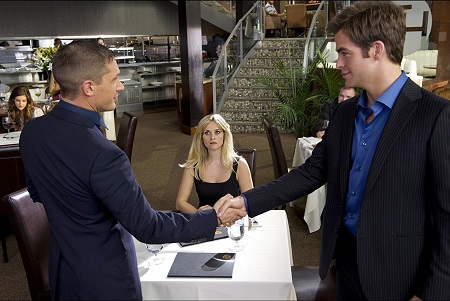 It’s that bad. Screenwriters Timothy Dowling (Just Go With It) and Simon Kinberg (Mr. & Mrs. Smith), working from an original story by Dowling and newcomer Marcus Gautesen, don’t even bother trying to craft believable scenarios or characters, instead littering the plot with randomly connected moments of madness instead. The film gets by as well as it does solely on the strength of its stars, all of whom deserve better. They are not enough, but they’re trying to make this as palatable as they can and not phoning in their collective performances, and when you’re dealing with a picture as derivatively awful as this one an unlucky viewer has to take any good they can get.

The basic story involves two deep cover CIA spies and best friends, FDR (Pine) and Tuck (Hardy), who both find themselves sidelined when their attempted apprehension of international criminal Heinrich (Til Schweiger) goes spectacularly wrong. With time on their hands and through a series of events too ludicrous to go in to, both men discover they’re romancing the same woman, perky product tester Lauren (Witherspoon). One thing leads to another and suddenly FDR and Tuck are using their estimable skills in surveillance to eavesdrop on the other’s dates, and even though Heinrich is in L.A. the only thing these two spies can concentrate on is getting the girl to pick between them.

Everything here is fairly ghastly. The way Lauren meets both FDR and Tuck (the latter via an online dating service; the former in a video store) isn’t remotely believable, while the dates they go on feel contrived at best, rancid at worst. The way the two supposed best friends handle things is so juvenile I just don’t have words to process how gross it all is. It’s almost as if everyone is making up what they’re going to say or do right on the spot, the whole narrative so disconnected from its own winsomely dim reality it’s like Dowling and Kinberg didn’t write a script and only supplied the vaguest outline for the cast and crew to work from. 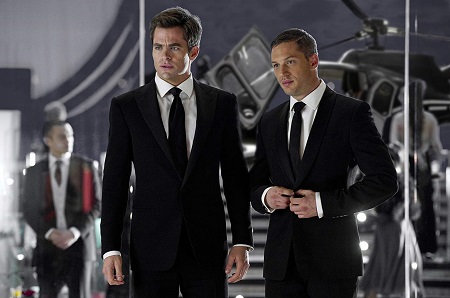 I cannot say I never laughed. Chelsea Handler supplies a few inspired nuggets portraying Witherspoon’s vulgar girlfriend (or is she might be her sister, the movie never makes that entirely clear), and Hardy and Pine do have moments where they rise above the material and become the charming rogues McG wants them to be. As for Witherspoon, she manages to make it out of this catastrophe unscathed, but considering her choices of late (How Do You Know, Water for Elephants, Four Christmases) it’s not like that’s saying a whole heck of a lot.

But as far as plusses are concerned that’s about it. The supporting actors are all muddling around wasting time, Schweiger and Angela Bassett (playing Pine and Hardy’s inflexible superior) particularly embarrassed by what Dowling and Kinberg ask then to do. McG directs as if on autopilot, and while the action scenes are technically proficient they’re so lacking in energy and momentum I kind of wondered at times if they were thrown in as an afterthought more than they were an integral part of the story. This Means War isn’t an abomination, but that’s not exactly a positive, and I imagine a rabid seal smacking me in the face with its flipper for 90 straight minutes would be more entertaining than watching this romantically-challenged comedy ended up proving to be.