“Zathura: Attention space-adventurers, Zathura awaits. Do you have what it takes to navigate the galaxy? It’s not for the faint of heart, for once you embark upon your journey there’s no turning back until Zathura’s reached. Pieces reset at the end of each game. Play again and again for different adventures.”

Based on the classic children’s storybook by author Chris Van Allsburg, 2005’s Zathura is a spectacularly entertaining family-friendly adventure filled with winning moments, superb visuals and strong performances. An early effort for Iron Man and Chef director Jon Favreau, the movie is a triumph of practical effects over digital, moving with a giddy, free-spirited energy that the other Van Allsburg adaptation – the oddly popular 1995 Robin Williams hit Jumanji – sadly lacks. It’s a heck of a lot of fun, start to finish, and watching it again I couldn’t help but be struck by just how entertaining this housebound interstellar adventure ultimately proves to be. 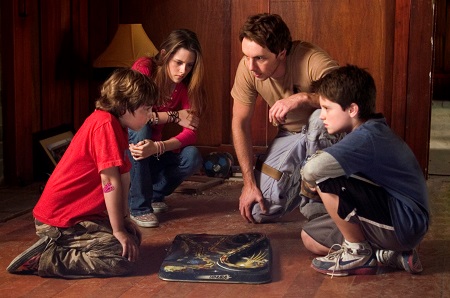 The story revolves around Danny (Jonah Bobo) and his older brother Walter (Josh Hutcherson), the two kids unhappily stuck at home being indifferently babysat by big sister Lisa (Kristen Stewart) when their father (Tim Robbins) has to run into the city on business. Finding a strange board game called “Zathura” in the attic, the two boys discover that with every turn of the key and reading of the next game card the stuff the game talks about begins to happen for real, their entire house suddenly in the middle of outer space, the siblings forced to battle against a deranged robot and a legion of flesh-eating lizards, only a mysteriously knowledgeable astronaut (Dax Shepard) their only ally as they try and return to Earth safe and sound.

Not only is the movie a nice early showcase for Stewart and Hutcherson, it’s also a reminder of just how quirky and visually imaginative Favreau can be when he wants puts forth the effort. Fast-paced, filled with a number of excitedly energetic set pieces, the whole thing is anchored in the timeless brotherly tale of two boys learning to get along no matter what, everything building to a heartfelt coda that’s solidly genuine. Zathura works, especially for the younger kids, the fantasy-adventure aging surprisingly well this past decade proving to be a grand piece of all-ages entertainment worth checking out. 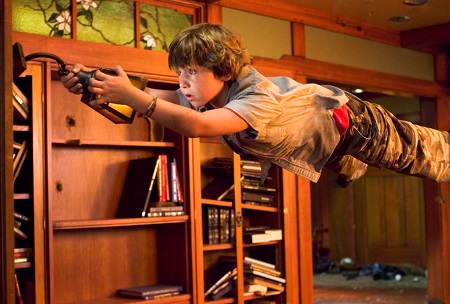 The majority of the extras, including the excellent Audio Commentary with director Jon Favreau and co-producer Peter Billingsley, are all ported over from the previous Blu-ray release save for the BD Live functionality options (which no longer exist) and the DVD version of the film. New extras for this 10th anniversary release include:

The Cast of Goosebumps Reflects on Zathura (5:18) – Goosebumps actors Dylan Minnette and Ryan Lee reflect on their affinity for Zathura, a reflection on the film that feels more scripted than genuine (no surprise there). A preview – the same preview from the Sneak Peek! – for Goosebumps follows.

I’ve always liked Zathura, prefer it over the other Chris Van Allsburg adaptation Jumanji (as I’ve already stated), director Favreau doing a wonderful job bringing these storybook classic to life. Sony’s anniversary Blu-ray presentation doesn’t improve on the original release which means it’s excellent across the board, and if you don’t already own the previous version picking this one up is hardly a bad idea.