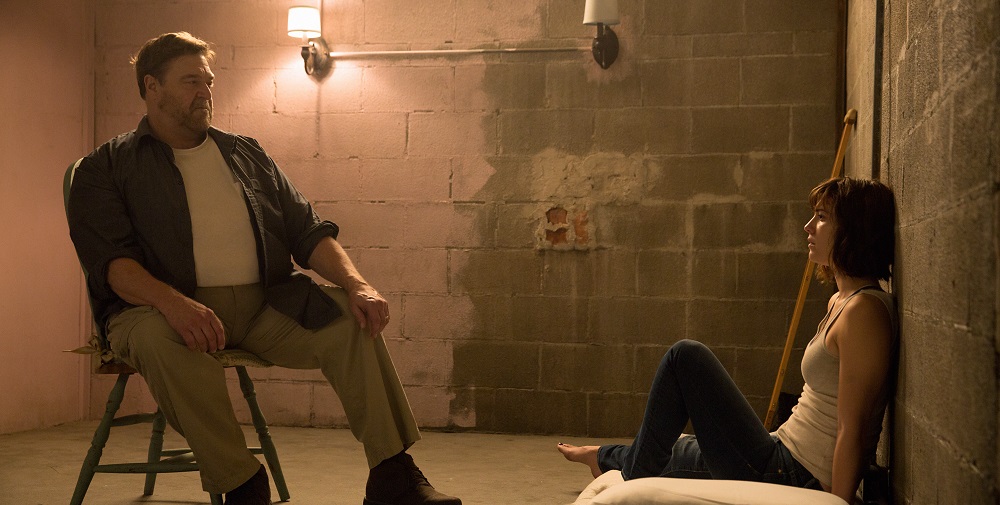 Michelle (Mary Elizabeth Winstead) wakes up on a small mattress in a concrete room, handcuffed to a water pipe and her knee in a brace. Lumbering his way through the door is scruffy-looking giant Howard (John Goodman). She was in a car accident, he explains to the scared young woman. He brought her here. He took care of her injuries. He locked her up for her own good, not wanting her to reinjure herself in any way when she awoke. In short, he saved her life, and not just from the crash, but from something, as he describes it, much, much worse. 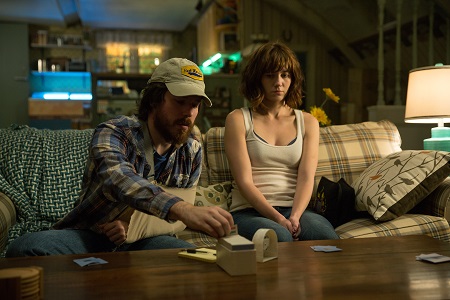 Turns out, Michelle is in Howard’s survivalist bunker, joined there by a young man, the happy-go-lucky Emmett (John Gallagher Jr.). According to them, something horrible has happened in the outside world, an airborne toxin released by unknown agents that is painfully fatal to any unlucky enough to breathe it in. It’s Armageddon, or so says Howard, and if the three of them want to survive, then they should stay right where they all are, in his bunker, for at least the next year, maybe even two.

Here is all you need to know about 10 Cloverfield Lane: It’s awesome. That’s it. Nothing more. Not a broader plot description. Not an idea of what happens. Not even how, if at all, the movie, produced by J.J. Abrams and executive produced by Matt Reeves and Drew Goddard, connects to the trio’s 2008 surprise hit found-footage giant monster creature feature Cloverfield. Born from a witty, breathlessly intricate puzzle box of a script by Josh Campbell, Matthew Stuecken (both of whom also conceived the original story) and Whiplash Oscar-nominee Damien Chazelle, creatively and confidently directed by newcomer Dan Trachtenberg, this agonizingly tense three-person thriller is terrific, a can’t-miss piece of high-concept entertainment that by all rights should be a massive hit.

The acting is superb. There is a playful tenderness to Gallagher’s Emmett that belies the pain he is now feeling, realizing he’ll likely never have the chance to fulfill his dreams or make amends for past regrets. His hurt coupled with his relative joy at being a survivor is glorious, the way he relates to Howard’s apparent paranoia and eccentricity a great counterpoint to how the clearly mystified Michelle is dealing with things. Gallagher brings a childlike innocence to his performance that grows in depth and power, allowing for the character to build to a heroic form of sacrificial authenticity that’s sublime.

Winstead, who once upon a time deserved an Academy Award nomination for 2012’s alcohol addiction drama Smashed, is just as wonderful. The fear Michelle feels awakening in Howard’s bunker is palpable, the way she attempts to use her intellect to determine what is truth, what is fiction, and what exactly she should be doing to differentiate between the two equally so. There is something magnetically vulnerable about what Winstead is doing, the actress finding a way to make her character heartbreakingly relatable as she deals with monsters both exterior and interior, her journey of self-discovery the one around which the film indefatigably revolves.

It is Goodman, however, who makes 10 Cloverfield Lane essential. In a career littered with a number of great performances, here, in this small, low budget B-grade down-and-dirty genre thriller, he delivers one ranking right up there with his absolute best. Howard is a complicated creature, filled with numerous layers, teetering between psychosis and selfless tenderness, and it is continually unclear what his intentions in regards to Michelle and Emmett truly are. Even when it becomes apparent what has happened in the outside world and who this man is down in the cold, concrete confines of the bunker, Goodman finds a way to root him in a form of humanity that is pitifully tender, his intricate, cryptically disconcerting portrait of a man at war with himself as poignant as it is terrifying.

The dialogue is top-notch, having a naturalistic quality that belies the inherent dangers lurking within every syllable that passes between the trio at any given time. The script parcels out clues to the central mysteries with pleasing restraint yet is never nondescript or purposefully vague, everything one needs to understand about what is going on, as well as what will likely happen during the third act, plainly visible every step of the way. The film calls to mind Hammer productions of the 1960s or, even better, the eerie, groundbreaking low budget genre marvels of Jacques Tourneur of the early 1940s, the character-driven terrors present throughout reminiscent of classics like Cat People or I Walked with a Zombie. 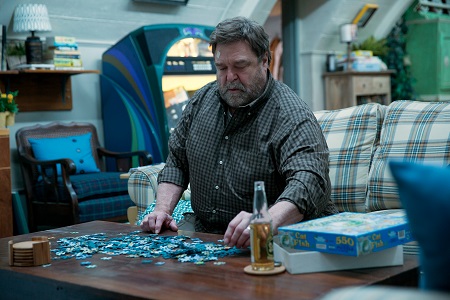 Trachtenberg’s direction is simple, free of artifice and always on point. There is no fat on this film’s bones, everything moving at the proper pace and speed, building to its explosive resolution with unwavering commitment and supreme authority. He utilizes composer Bear McCreary’s sensational score – his third winner this year after The Forest and The Boy, and first for a movie worthy of his efforts – like a thunderous sledgehammer, while the picture’s cacophonous sound design is unsettlingly immersive in ways that sent shudders up and down my spine with delicious ease.

Just because the word “Cloverfield” is in the title, do not assume it is a foregone conclusion where things will end up. Same time, even if one does assume the monsters alluded to in the title will go beyond the metaphorical and enter into the world of the literal, the genius of this movie is those expectations aren’t just met, they are encouraged. More, Trachtenberg exceeds them, building to an astonishing, powerfully gripping climax that had me sitting so far out on the edge of my seat I was in danger of falling to the floor. 10 Cloverfield Lane might not be a true sequel to Cloverfield, but that doesn’t make it any less magnificent, watching it a spellbinding treat I simply did not want to see come to an end. 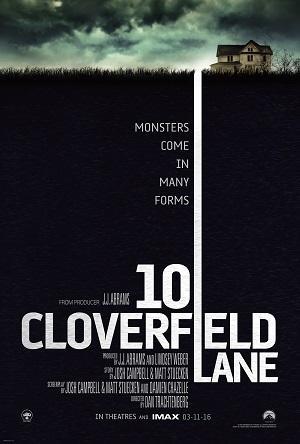