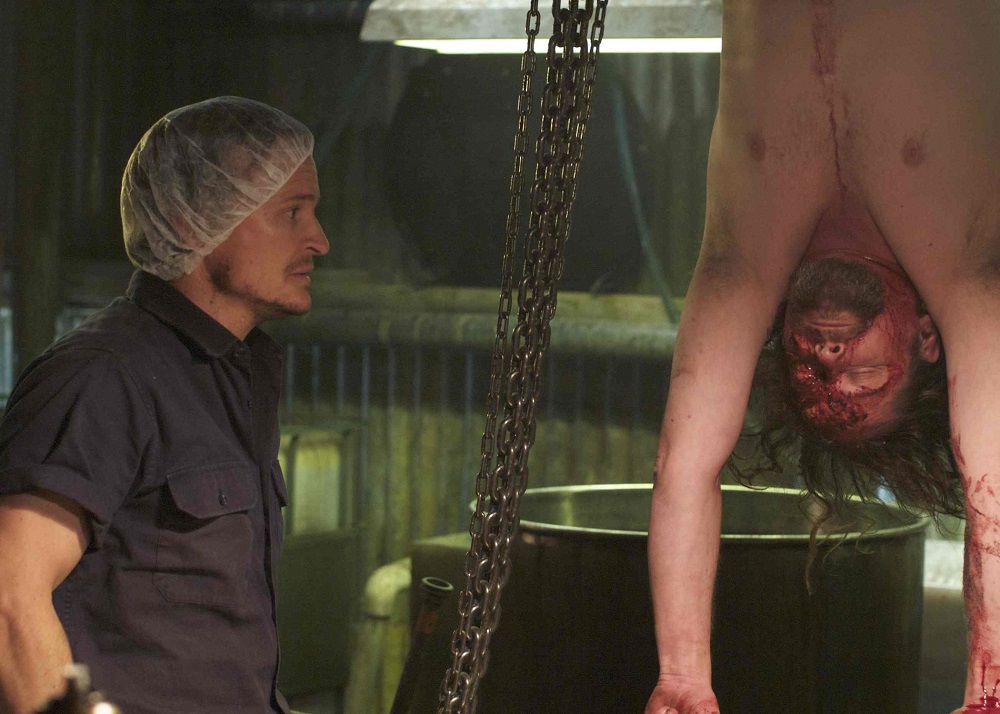 Morgan Brother’s organic blood and bone fertilizer has been a hot seller, especially after insecure Reg (Damon Herriman) stumbled across an accident scene on a bit of deserted highway and brought the bodies back for his older sibling Lindsay (Angus Sampson) to add to their expertly balanced mixture. But that batch is starting to run low, and local farmers are eager to get their hands on more of the blend, and as the Morgans aren’t exactly murderers per se their options in regards to seeing their small business continue to blossom are relatively few. 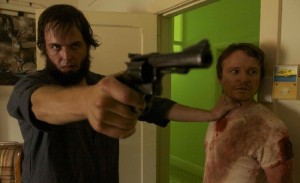 Or aren’t they? Not only does Reg stumble upon another crash site with what appears like an extremely dead victim trapped inside the car, as luck would have it he also runs into three Sydney youths on their way to an outdoor concert in need of a ride. But as they make the trek back to his property (“Just a quick detour!”) the younger Morgan is slowly charmed by the lovely Sophie (Anna McGahan), and the closer they get to the farm the more he begins to think taking the clueless trio to the concert and not adding them to the fertilizer might be the better of his options.

Sadly, Lindsay doesn’t see things the same way, especially after Sophie’s fellow companions James (Oliver Ackland) and Wes (Jamie Kristian) stumble upon the human roadkill hidden underneath fertilizer bags in the back of the van. Now, not only is the trio suddenly forced to fight for their lives, Reg isn’t entirely certain he can go along with his brother’s murderous plans, his affections for Sophie starting to make him wonder if keeping their business alive is worth the ever-increasing body count.

Comedy-horror import 100 Bloody Acres, written and directed by brothers Cameron and Colin Cairnes, is a blast, so gruesomely entertaining I almost don’t know where to begin. In some ways it plays a bit like an Australian Tucker & Dale vs. Evil but with a decidedly Outback twist, in others it could probably be considered the comedic second cousin to exploitation shocker Wolf Creek. But in reality it is its own unique, deliciously twisted animal, spinning yarns and spilling guts in ways that are continually novel and overflowing with ingenious imagination.

Herriman, best known for his portrayal of the dimwitted Dewey Crowe on TV’s “Justified,” has a blast playing Reg, and while the character isn’t exactly a stretch for the actor that doesn’t mean he still doesn’t make the most of his time inhabiting him. His comedic timing is impeccable, while his sweetly befuddled demeanor as he grows more and more enchanted with Sophie is oddly endearing. Best of all, his chemistry with the Hulk-like Sampson is relatively close to awesome, making their eventual disagreements over what to do with the kids moderately more affecting than they arguably have any right to be. 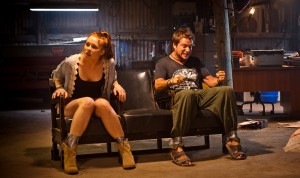 Speaking of Sampson, he’s a great a horror villain as any we’ve seen in quite some time. A lumbering behemoth, he’s smarter than he looks and more willing to do what it takes to make sure his enterprise thrives than one might initially surmise just by looking at him. His descent into slasher depravity isn’t by choice, it’s by necessity, and as a small business owner he knows a few tears have to be shed, some bones must be broken and a little blood has just got to be shed if one wants to experience success.

The brothers Cairnes stage their escalating series of unfortunate events with lackadaisical confidence, propelling things ever forward with jovial efficiency that’s as inventive as it is absurd. They spill a lot of blood, throwing guts and bits of flesh all over the place, doing it with a gorgeously energetic joy that’s continually impressive. The pair show a great deal of promise, and one hopes they’ll continue to be as resourceful as they move onto new projects in future.

The movie is a little on the slight side, and as much fun as it all is I will say there weren’t near as many belly laughs as I kind of felt there should have been. I can’t exactly say I was fond of Ackland or Kristian all that much, either, and while both have a few individual moments that got me to chuckle overall neither actor did anything for me. But as issues go those feel like minor ones, 100 Bloody Acres a bit of gory pulp comedy-horror fiction I want to stand up and cheer. 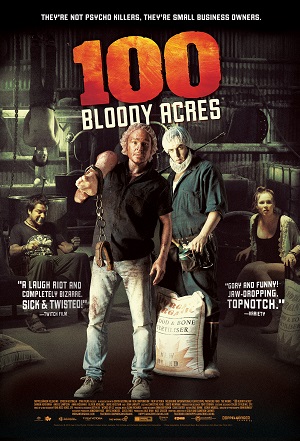