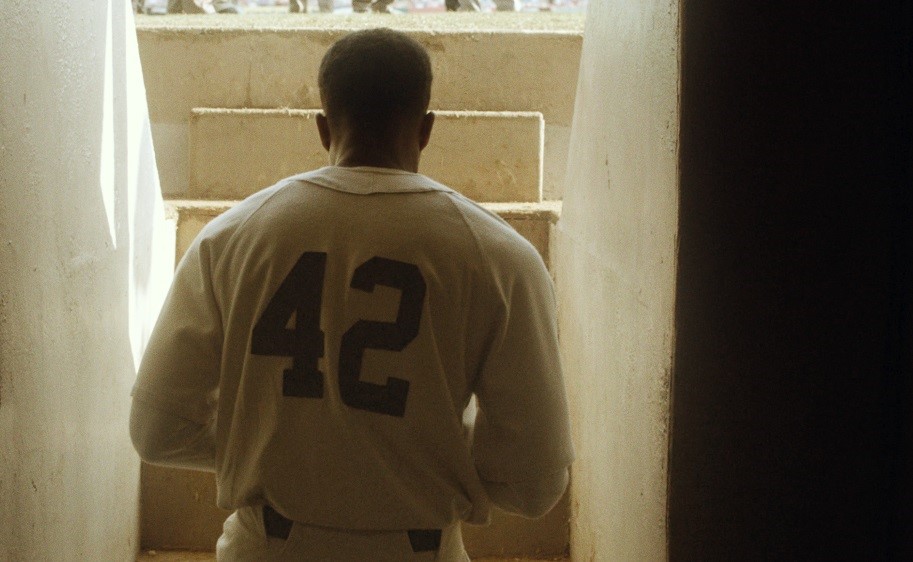 It’s incredibly hard not to become emotionally caught up in the Jackie Robinson biopic 42, even if at the same time it’s just as difficult not to realize how imperfect writer/director Brian Helgeland’s film ultimately is. The man who wrote the Academy Award-winning script for L.A. Confidential but who has also helmed a trio of wildly uneven features (Payback, A Knight’s Tale and The Order) isn’t immune to old school Hollywood hokum, something that on occasion works out to his benefit but usually ends up hurting his films like a lethal self-inflicted wound. He likes soaring music, telegraphed emotions, big speeches and romanticized moments, all these traits and more like them on display for all to see here.

Thing is, especially during the majestically staged baseball sequences, this is a tendency that actually suits this picture beautifully, Mark Isham’s (Warrior) bombastically unsubtle score queuing up at just the right moments, Don Burgess’ (Flight) camerawork purposefully stylized, Peter McNulty (The Master) and Kevin Stitt’s (Jack Reacher) editing electrically crisp and Chadwick Boseman’s performance as the Brooklyn Dodgers icon delivered with confidently forceful magnetism. It is during these sequences that Helgeland’s picture soars, his examination of Robinson’s culturally impactful rookie season clicking with a resonating authority that’s impossible to deny.

The flip side? Well, many of the non-baseball moments, the ones dealing with Robinson’s marriage to his wife Rachel (Nicole Beharie), the impact of his arrival upon his teammates like star shortstop Pee Wee Reese (Lucas Black) and his interactions within the communities the Dodger baseball club is visiting reek of melodramatic nonsense. Whether the events depicted within the film happened just as they are reenacted here or not, Helgeland still stages many of them with all the subtly of a swift slap to the face, the rampant clichés running around the base path far too gargantuan too ignore.

The saving grace to all of this is not only the performance of Boseman, the actor a heck of a long way from television stints on “Lincoln Heights” and “Persons Unknown,” but also the one delivered by iconic megastar Harrison Ford. Portraying Dodgers GM Branch Rickey, the actor sheds his usual tricks and ticks and delivers a gutty, grumbly and altogether winning portrayal that for baseball buffs brings the legendary Hall of Famer to life like nothing they’ve ever seen before. He’s marvelous, showing again why he is one of the more underrated actors of the past four-plus decades and 70-years-old is still a magnetic force to be reckoned with. 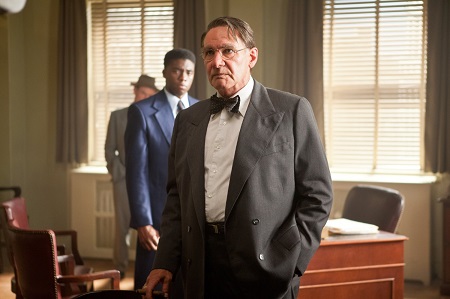 If only the director could have held himself in check, kept the hokey, schmaltz-layered moments to a minimum, many of the non-baseball bits of dialogue so on-the-nose they border on insulting. This matters because, in the end, Robinson’s story, what he spoke for, what he still keeps speaking for long after his death, none of that needed any embellishment. While the story is set in the 1940s that didn’t mean it required a ‘40s style of storytelling, and where less is usually more for whatever reason Helgeland felt the need to go a different, more schmaltzy route instead.

Still, I find 42 to be awfully entertaining, almost in spite of itself at times. While a flawed film, its imperfections plainly obvious, the central narrative is so deeply impactful I was moved to the point of honestly justified tears on multiple occasions. Helgeland delivers Robinson’s rookie season with the Dodgers like a two-seam cinematic fastball fired with authority, and while the director might hang the pitch a bit too far in the middle of the plate the fact he still manages to ring up a strike isn’t anything to scoff at. 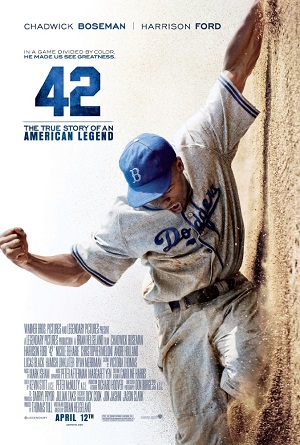