A majestic yew tree in the middle of the local cemetery overlooks the entire town in which 12-year-old youngster Conor O’Malley (Lewis MacDougall) lives. But this is no ordinary tree, this ancient guardian actually a massive monster (voiced by Liam Neeson) who only comes awake when his presence is most required. In Conor, this lumbering being of bark and branch sees a soul in need, stating in no uncertain terms he has appeared to tell the boy three individual stories, one each time he visits. As payment for these metaphorical tales of hardship, heroism, sacrifice and woe, he expects a fresh story in return, and it will be up to Conor to tell him it when the time comes.

Beautiful, sincere and emotionally pure, there’s a lot more going on in J.A. Bayona’s (The Orphanage) powerful gothic melodrama A Monster Calls than initially meets the eye. The story of a kid doing what he can to deal with the feelings of inadequacy and weakness he’s being consumed by as his mother valiantly fights against cancer, this movie is a wide-eyed stunner that intimately understands children and parents in ways that consistently amaze. There is nothing pandering about the director’s adaptation of Patrick Ness’ novel, he and the author joining forces to bring to life a motion picture that pulls at the heartstrings with an effortlessness that’s extraordinary. A magnificent achievement with precious few missteps, to put it simply this movie blew me away.

Ness’ screenplay, the author tackling that task himself, is a model of efficiency. He’s streamlined his narrative in a fashion that is both familiar and imaginative, allowing the normal mechanics of a story like this to not inadvertently call attention to themselves. There is nothing forced here, the potentially maudlin mechanics that could have derailed things and made the film an insufferable bore eschewed by the filmmakers at seemingly every turn.

Conor is bullied at school, he has an overbearing grandmother who doesn’t seem to appreciate him and a father who has divorced his mother and has subsequently remarried and moved to America. In lesser hands, these elements could have drowned in forced treacle. But Bayona and Ness do not allow that to happen, instead using these tried and true plot devices to augment Conor’s situation, adding extra layers that grow in power and resonance as things advance to their conclusion. It’s shockingly authentic, the director, not just channeling his more devilishly macabre tendencies, but also managing to play around with the genre’s dynamics as if he were attempting to combine Ken Loach’s Kes, Wolfgang Petersen’s The NeverEnding Story and Guillermo del Toro’s Pan’s Labyrinth in one gloriously ingenious package.

What’s interesting is that Bayona and Ness do not try to hide what is really going on. They’re very clear in regards to the metaphors they are exploring, Conor’s mother’s cancer an omnipresent villain right from the start. While there is a twist, it’s subtly delivered, a picture on a desk revealing an extra layer of truth that had me choking back honestly earned tears. For the most part, all of the threats confronting the child are front and center, the filmmakers refusing to sugarcoat the situation or try and paint the picture for anything than what it obviously is.

Which is where the fantasy comes in. The relationship between Conor and his monster pal is developed with graceful ferocity, the unstoppable creature able to help his new friend navigate through a cavalcade of emotions through the majesty of his idiosyncratic fairy tales. While the movie overflows in rage, while Conor does the unthinkable from time to time, it is grief, unstoppable, unassailable, ruthless grief, that courses through the veins of the story, and the refreshing simplicity in which this emotion is dealt with and discussed is why Bayona’s latest ends up being such a monumentally effective marvel.

Young MacDougall is a find, the newcomer delivering a performance of surprising complexity and depth. His interactions with Felicity Jones as his mother, Sigourney Weaver as his grandmother and with Toby Kebbell as his loving, if understandably estranged, father all ring true, every second building in significance as events progress. All of them work in marvelous tandem, and no matter how larger than life or fantastically explosive things might get the cast manages to ground it all in solid, inherently believable truths viewers of all ages can relate to.

There are some cartoonish elements, and the revelation as to the monster’s origins is delivered with a bit heavier hand than anything else in the movie. But I adored the ways MacDougall and Jones wrap tightly inside one another’s arms, while a climactic meeting of minds between the young actor and Weaver had me heartbreakingly reaching for tissues. As for the monster, not only is he magnificently voiced by Neeson, he’s also skillfully realized by the film’s crack effects team, each appearance a swirling maelstrom of visual ingenuity that’s glorious.

At a certain point, there’s only one place that A Monster Calls can build to, the outcome justifiably inevitable. But that’s okay, Bayona and Ness allowing the inherent emotions at the core of Conor’s journey to flower and bloom with restrained, unfettered grace. The movie is an emotionally cathartic marvel I was continually captivated by, its final moments as genuine as its title character is pretend, the overall spell it ultimately casts unforgettably pure. 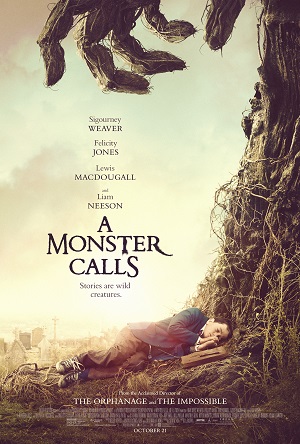