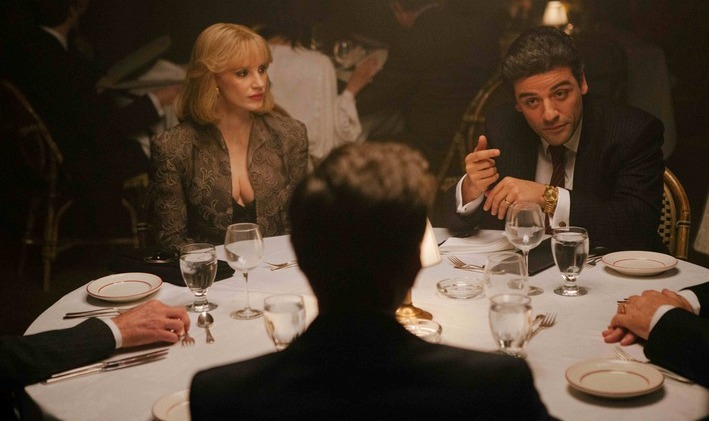 As far as New York was concerned, 1981 was one of the most violent the city had ever known. Corruption ran rampant through the political and law enforcement ranks. Warring mob families did all they could to corner every market, most of them on the surface legitimate. Labor unions were taking kickbacks and filling their coffers with bribes obtained for their rank and file’s services whether they be rendered or no. It was a crazy period where up was down, down was up and sideways was a murderous dance macabre in and of itself, trying to make a go of things not for the squeamish.

It is within this upside down mousetrap that heating oil magnate Abel Morales (Oscar Isaac) and his ferociously intelligent wife Anna (Jessica Chastain) are attempting to make their move. They’re on the verge of completing a business deal that will allow them to corner the market in the city, lawyer and friend Andrew Walsh (Albert Brooks) helping them lay the building blocks for a vision that will set their business, their employees and, most of all, their family for generations to come.

But to do so they’ve leveraged themselves to the breaking point, needing to put together one last pile of cash in only a handful of days to make sure the contract is signed and the deal goes through. There are those that do not wish to see this happens, their trucks continually getting hijacked, their drivers terrorized and their salesmen beaten to a pulp. On top of that, a driven New York District Attorney (David Oyelowo) has decided this is the moment he’s going to investigate Abel for a variety of perceived financial indiscretions, his reasons for doing so held impossibly close to the vest. 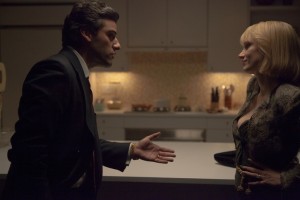 What follows is a mishmash of Shakespeare, Mario Puzo, Frances Ford Coppola and Sidney Lumet with a health dash of William Friedkin and Jean-Pierre Melville mixed in for equal measure, writer/director J.C. Chandor proving without a shadow of a doubt both Margin Call and All Is Lost were anything but flukes. His latest, the aptly titled A Most Violent Year, a surging, all-encompassing tidal wave of angst, anger, emotion and perseverance, all of it circling around a very good man tempted to do very bad things in order to see his dreams become reality. It builds momentum like an avalanche coursing down a mountainside crushing everything within its wake, the calm, almost serene devastation left in its wake horrifically beautiful in its calmly silent trauma.

Make no mistake, while there are few shots fired and even less blood is spilled, that does not mean Chandor’s film doesn’t live up to its title. Much like The Godfather, reminiscent of The Prince of the City and Bob le Flambeur, it are the interior traumas, the self-inflicted emotional wounds that are the most debilitating, each one building upon the next to achieve a level of stunning, almost stately calamity that’s as awe-inspiring as it is all-encompassing. This is a film about interactions, about communications, how personal involvement leads to developments both stunning and mundane, all points in-between covered with each and every step.

More than that, much like Shakespeare’s King Lear or Othello, it is a microscopic examination of how good people can walk themselves straight into darkness for what appear to be all the right reasons. Abel’s immigrant story is one of perseverance and success, and while he hasn’t dotted every ‘i’ or crossed every ‘t’ he’s still done things in more or less the right way. He’s a good man, maybe even a great one, so watching him make the choices he does in order to see things through are horrifying in ways that are viscerally palpable. Every time he gives into pressure to compromise, each moment he tells himself he’s only going to do what has been asked of him just this one little time, all begin to add together into an immeasurable assault against his immortal soul, the stakes more unforgivable than anything he could have possibly imagined before he’d even set one foot down upon his chosen path.

Isaac, following up his sensational turn in Joel and Ethan Coen’s Inside Llewyn Davis, is as amazing as ever, delivering a performance that’s so full of depth and emotive resonance the overall effect it had upon me as I watched it was close to mind-blowing. In many ways Abel’s journey is much like Michael Corleone’s was, and as such it is incumbent on the actor’s part to make sure each turn of the screw, dulling of the senses and fracturing of the moral center to feel distinct, authentic and, most importantly, altogether natural. Isaac does this and then some, his evolution a fascinating sojourn building to a striking revelation that had me moved to the point of awe. 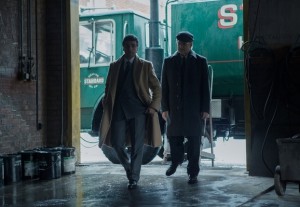 So, with that in mind, when I say that Chastain is even better you know exactly where I am coming from, the two-time Academy Award-nominee so staggeringly terrific I almost don’t know where to begin. She’s the Lady Macbeth of the tale, the woman whose behind the scenes machinations allow everything both seen and unseen run. Anna twists and turns with the wind, her past – most notably a never seen, often talked about mob boss father – as important to the evolving events at hand as anything else fueling their combustible fury. It is a bewildering, almost smothering portrait of building animalistic savagery, her feral attack instincts only dulled by a rigid code of honor that puts the well-being of her children and the success of her husband above baser inclinations to rip out the throats and drown in the blood of those looking to do them harm.

Chandor gets better with every trip to the well. He stages a third act sequence of chase and capture that instantaneously ranks with some of the cinematic greats like those found in The French Connection and Heat, a chase that begins on the road and ends on foot so pulse-pounding I thought my heart was going to explode. But it is the interior angles he mines most delectably, always putting his characters at the forefront allowing their transformation to speak untold volumes of angst and pain even as success looks to be a blissful possibility. It’s a directorial masterclass in control and vision, no piece ever feeling out of place and no moment out of step with any that precedes it

There’s so much more to be said, but in the end all I really want is for people to experience the glories and the monumental achievements of A Most Violent Year for themselves sans too much input or explanation from me. Chandor has elevated himself to the upper echelons of directorial voices working today, and for the foreseeable future anything he chooses to turn his attentions towards I’ll be first in line to experience no matter what it may be. 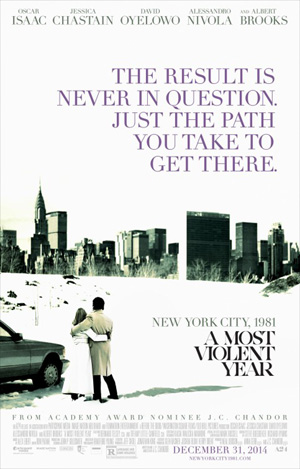