Hardworking Yi (voiced by Chloe Bennet) is hiding quite a bit from her worried mother (Michelle Wong) and her beloved Nai Nai (Tsai Chin), not the least of which is that she hasn’t fully dealt with the overwhelming grief she keeps secretly buried inside herself after a recent family tragedy. Late one evening while resting in her hideaway up on the roof of their Hong Kong apartment building, the teenager makes an unexpected discovery. Hiding in the shadows is a yeti, a supposedly mythical creature that according to legend lives high in the Himalayas.

Nicknaming him ‘Everest’ after his homeland, Yi and the yeti make quick friends, the youngster deciding to make it her mission to get the animal out of the city and safely back to his mountaintop habitat. She is joined in her thousand-plus mile trek by pint-sized basketball enthusiast Peng (Albert Tsai) and his cell phone-obsessed cousin Jin (Tenzing Norgay Trainor). Additionally, tracking their every move is wealthy explorer Burnish (Eddie Izzard), who once encountered a yeti as a much younger man and has been obsessed with them ever since, and his British zoologist Dr. Zara (Sarah Paulson), whom he has tasked in helping him capture the animal. But Yi, Peng, Jin and Everest are undaunted, their determination fostering a special kind of magic that will forever link them together as the very best of lifelong friends.

I want to say that DreamWorks latest animated offering Abominable is a minor affair. It’s plotting is fairly simplistic and straightforward. The studio’s over-reliance on pop music continues. The animation alternates between being dynamically eye-popping to looking exactly the same as previous DreamWorks films going all the way back to Shrek (and likely even before that). I want to say all of that and more but find I cannot do so. Truth of the matter is that Abominable, our third kid-friendly endeavor in the past year featuring a yeti or a sasquatch as a central character (the forgettable Smallfoot and the stunning Missing Link being the other two), stole my heart and returned it to me filled to the brim with happiness, contentment and love. This movie made me smile, and for all its relatively insignificant shortcomings it ended up making me feel all kinds of happy by the time I exited the theatre.

The core of my delight revolved around the central relationship between Yi and Everest. They’ve both experienced loss. They’ve each have dealt with unimaginable pain. They are trying to find their respective way through the labyrinth of mutual grief and discover a particular kind of solace and agency to do just that as they work together towards this common goal of returning Everest home. In the process, they also form lasting bonds with Peng and Yi that allow them to see the world and the creatures who reside within it in a whole new light, each member of this quartet finding their own unique way to harmonize with the natural world as this journey progresses. All of this is developed splendidly in director Jill Culton’s (Open Season) richly textured and delicately balanced script, surprises involving a couple of the adult characters also happening with an organic efficiency that’s marvelous.

The film doesn’t have the overall depth that Laika Entertainment’s stop-motion stunner Missing Link showcased with such effortlessness, and there were moments where things were played a bit too simplistically for my personal tastes. But I liked these characters one heck of a lot, felt the entire cast (especially Bennet, Paulson, Izzard, Chin and Tsai) turned in superb vocal performances and there were a good five or six moments of pure, unfettered emotion that held me positively spellbound as I unsuccessfully attempted to hold back a couple of tears. Culton and her co-director orchestrate the on-screen action with Todd Wilderman goofily giddy panache, Rupert Gregson-Williams’ (Wonder Woman) superlative score augmenting everything that transpires beautifully. Abominable is as entertaining an animated feature as I’ve seen this year, audiences of all ages almost certain to thrill to its avalanche of pleasures for many years to come. 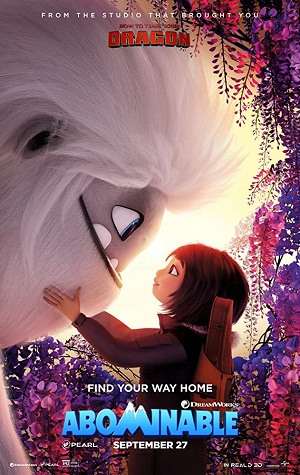