The pair strikes up an uneasy relationship, Braeden continuing to let this psychologically wounded man pay him for sex getting the approval of his HIV-positive boyfriend Lukas (Anthony Johnston), the pair currently in an open relationship, to do so. Complicating matter further, Sam’s best friend Jeffrey (Patrick Breen) has just married a talkative, flippantly outspoken millennial named Mateo (Wilson Cruz), while at the same time the artist’s longtime gallery has dumped him for not being able to produce anything new of value in months. While Maggie (Sarita Choudhury), a woman who was there in the 1980s and ‘90s standing beside him and William as part of the ACT UP movement, is ready to help him prepare for his birthday party, even she is growing tired of his seemingly insufferable inability to psychologically evolve with the times. Soon Sam comes to realize it’s he who might be stuck in place, and the best way for him to start to take steps towards embracing the present might just be to help those like Braeden and Mateo understand what he faced in the past and how it’s helped this current generation have hope for a more welcoming and inclusive future.

A generational drama overflowing in intelligence, warmth, heartache and a great deal of anger, director Vincent Gagliostro’s After Louie is a talky, thought-provoking story of a man looking back at his life and unable to differentiate between success and failure. It is a commentary on how past and present collide in ways that aren’t always immediately apparent, and how a youngster views a current situation can oftentimes be the polar opposite that of those old enough to be their parents or grandparents. This is the core dialogue Gagliostro and co-writer Anthony Johnston’s literate screenplay focuses on, making the movie a fascinating historical debate overflowing in honest insight and authentic human emotion.

If only all of that dialogue was as continually interesting as it so achingly wants to be. Some of these monologues and verbal sparring sessions get a little repetitive, hammering home points and observations that had already been made rather succinctly. There are also times their theatricality feels more appropriate for the stage than they do the silver screen, and even though this movie isn’t based on a play one would certainly be forgiven for thinking it might have been. It can all become more than a little exhausting, Gagliostro showcasing a moderately heavy-hand that sometimes noticeably stifles the inherent emotion fueling a given scene in a significant way.

Saving the film are the actors, Cumming in particular. This is a sensational performance, the veteran character actor masterfully crafting a three-dimensional figure whose pain is viscerally palpable. Sam, so caught up in his own disillusionment and grief, almost belligerently refuses to understand why thirty and twenty-somethings are seemingly unable to grasp just how far things have come in the past thirty-plus years. He doesn’t get how they take for granted that the freedoms they enjoy haven’t actually been there all along, doesn’t comprehend why they don’t look at AIDS in horror and instead look at it is a disease that can be treated with casual indifference.

There’s a lot to love about After Louie. Its heart is undeniably in the right place. It has a conversation about the differences between generations, especially as it pertains to the fight for LGBTQ equality, that is vital and important. Gagliostro shows himself to be a confidently assured filmmaker interested in telling clever, thought-provoking stories grounded in reality. If the finished film can sometimes come across as a little didactic and slightly melodramatic, the stellar acting, especially from Cumming, makes those missteps feel relatively insignificant. This is a good movie. Here’s hoping interested viewers take the time to see it. 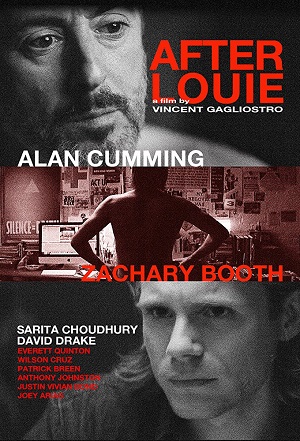