Two years ago, Mark Fisher (Josh Ethier) disappeared in a flash of blue light in front of best friend Seth Hampton (Graham Skipper) and girlfriend Jen Craven (Vanessa Leigh). With exact same suddenness he has now returned. But is he the same man he once was? Or is something new inside of him, something horrible, something not of this world, and, worst of all, something that is intent in making everyone it comes in contact with exactly like it.

Writer and director Joe Begos, working on a miniscule budget, combining horror genre favorites as disparate, yet still thematically connected, as John Carpenter’s The Thing, every version of Invasion of the Body Snatchers, Sam Raimi’s Evil Dead, Stuart Gordon’s Re-Animator, John Landis’ An American Werewolf in London, James Gunn’s Slither and a whole host of others, brings the absurdly entertaining and frantically graphic Almost Human to life with consummate skill. He and his team make an unabashedly nasty body invasion creature feature, mixing styles, ideas and genres with whiplash speed and fearless confidence. For those who enjoy this sort of thing the movie is a blood-splattered, human viscera-filled hoot, and without a doubt ends up being the kind of entertainment worthy of multiple viewings even though the gross-out factor is exceedingly high.

As great as all of that might be, sadly because the homage factor is so high, and because the level of the performances never rises above anything other than so-so, the movie never achieves stratospheric liftoff in the way any of its compatriots achieved. It’s almost too on the nose, too much of a freewheeling tribute to B-grade gore classics it aspires to be like. There’s not a lot setting it apart from the crowd, and as enjoyable as Begos’ picture might be that doesn’t make it as memorable as part of me can’t help but think it potentially could have been.

But, damn it all if Almost Human comes close to getting to that level all the same. When the blood starts flowing, when fluids start getting exchanged from one body into another, when the dead rise from the grave ready to do the same thing to others that has been done to them, Begos unleashes one unbelievably sickening sight after another. Even for someone like me who feels like they’ve seen just about it all the director manages to splash images across the screen unlike anything I could have imagined beforehand, a bit near the end between a once loving couple now mortal enemies in particular getting my eyes to pop from head like some animated Tex Avery cartoon character.

And that’s the point, right? As long as the story is solid, which it is, it’s doesn’t have to be wholly original, which it most definitely is not. The acting doesn’t have to be Oscar-worthy, which, again, it isn’t, it just has to pass the muster in order for the narrative to giddily run its course, and on that front it’s beyond successful. Most of all, the bloodletting has to be unrelenting, unique and, most importantly, believable, and with Begos eschewing CG effects for practical makeup gags Almost Human most certainly is that and then some. Make no mistake, Raimi, Gordon, Carpenter and all of their contemporaries would be proud. Not that it matters but, for the record, so am I. 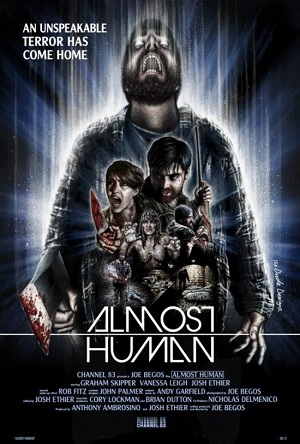