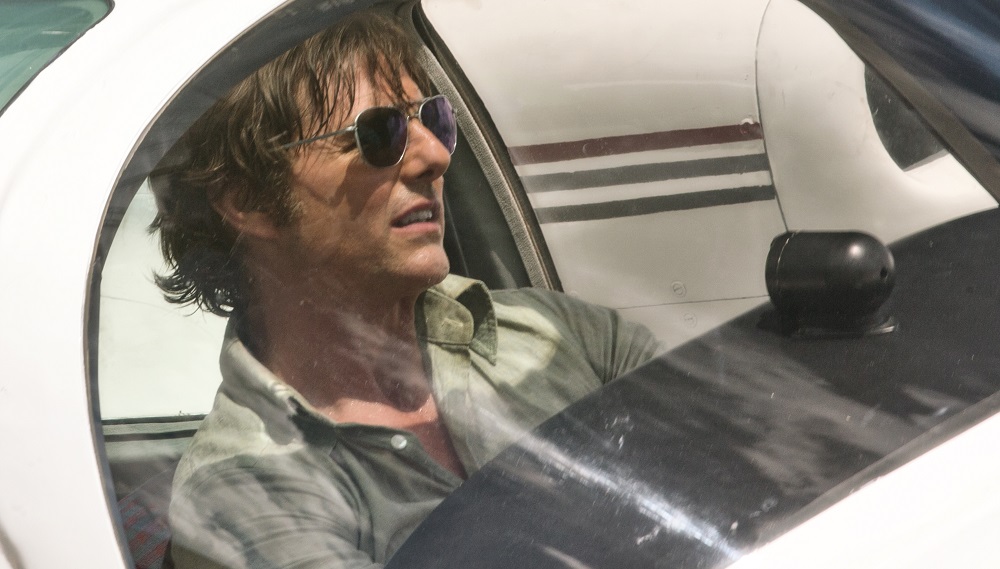 In 1978, TWA pilot Barry Seal (Tom Cruise) is approached by a gregarious, excitably determined well-dressed stranger calling himself “Schafer” (Domhnall Gleeson). He knows a lot about Barry, including some extracurricular activities involving some of his flights that aren’t exactly legal. But he’s just fine with that. In fact, he’d like to make the pilot a proposition and put him to work for his country. Only caveat? Barry can’t tell anyone about what it is he’s doing. Not his friends. Not his shrink. Not his priest. And sure as heck not his wife Lucy (Sarah Wright Olsen). 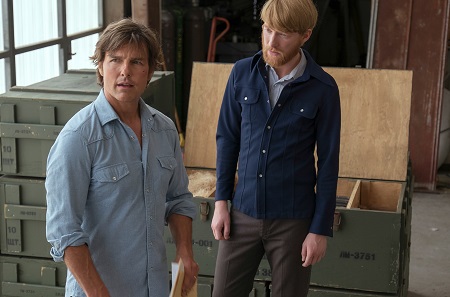 Thus begins the crazy true story American Made, a rambunctious and rowdy piece of satirical biography that reunites Cruise with his Edge of Tomorrow director Doug Liman, the movie a cheerfully chilly jaunt through the heart of darkness that proves to be one of the Fall season’s most entertaining surprises. Playing like the bleakly comic antitheses to 1986’s unapologetically jingoistic box office classic Top Gun that initially helped propel its star to international stardom, Seal’s story is the American Dream flipped on its head, Gary Spinelli’s sharply observant script cutting its protagonist little slack as it makes its way towards its suitably hardhearted conclusion.

Seal is basically an opportunist who leaps into things without taking the time to look where he might be landing. When the mysterious Schafer comes his way asking him to clandestinely take aerial photographs of communist guerilla camps in countries throughout Central America for the CIA? Sure. Great idea. When he’s then tasked with delivering bribes to Panamanian strongman Manuel Noriega in exchange for inside information pertaining to his country? Certainly. All part of the job. When a trio of Columbians, a group that includes Pablo Escobar (Mauricio Mejía), ask him to help them get their cocaine into the United States without law enforcement catching on? Hey, as long as the CIA is fine with him doing it, there’s no reason for him to not earn a little extra cash. When the U.S. Government gets the idea to run guns to the Contras fighting in Nicaragua and they want him to be the one to do it? Seal will just add it to his to-do list. After all, he’s the man who always delivers.

All of this and more happened, the former airline pilot transforming himself into a spy, smuggler and money laundering entrepreneur in less than a decade. Seal played all sides against one another, finding new angles to make money as he did so, in the process becoming one of the wealthiest men in American without anyone knowing it other than his CIA handler and his wife Lucy. She forces him to reveal the truth after their family is forced out of their Louisiana home overnight in order to stay one step ahead of the Drug Enforcement Agency relocating on CIA orders to middle of nowhere Arkansas, realizing at that moment her husband is no longer working for TWA.

Told through videotapes left by Seal in order to make sure there was documentation for everything he’s asked to do (as well as for the tasks he decides to take on all on his own), Spinelli’s script is structured somewhat like Martin Scorsese’s 1990 classic Goodfellas and Adam McKay’s 2015 Oscar-winner The Big Short. It’s also similarly light and bouncy in presentation while also containing a cold-blooded satirical edge, same as they both did. But where those movies dug deep to get to the center of the matter, looking for the truth in every harebrained scheme, incident of financial malfeasance, death-defying escape from justice and blood-curdling instance of automatic weapon fire, this one never quite shows the same passionate urgency to do the same.

Even so, this does not mean Liman and Spinelli pull their punches; it just means a few of them don’t hit nearly as hard as I hoped they would. The pair shortchange Lucy, and as good as Olsen might be the character never comes alive in the same way Lorraine Bracco’s Karen Hill did in Goodfellas. She was the perfect counterpoint to Ray Liotta’s Henry, his descent into gangster largess slowly but surely corrupting her as well. Much the same happens to Lucy, and while at first her husband’s willingness to sell himself to the highest bidder, even to Columbian drug cartels, while also being the CIA’s Central American lapdog sickens her, after a while the financial windfall works its evil magic upon her. With that in mind, this should be her story just as much as it is Barry Seal’s, their relationship, the fact it was able to withstand so much carnage, chaos, weirdness and insanity, the thing I found myself most interested to learn more about only to be frustrated when this doesn’t happen.

Thankfully, Liman has Cruise, and he knows just how to utilize him. Much like Edge of Tomorrow, he takes what people have liked and been drawn to about the actor, his cocksure confidence, his roguish charm, his smug self-assurance in his belief that his actions are always the right ones, and then proceed to deconstruct it bit by deliriously devilish bit. Seal is a cad, but his captivating magnetism is still undeniable. That only makes the man’s senseless selfish stupidity all the more destructive, both for himself and his family. Cruise embodies all of this with ease, delivering a complex, ferociously dynamic performance that ends up being a vibrant, electrically kinetic reminder of just how great an actor he can be when he’s sufficiently challenged. 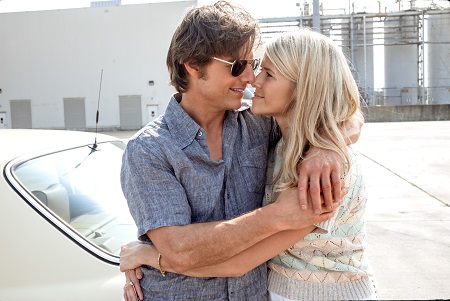 Then there is the story itself, a piece of history that proves once again that truth is always stranger than fiction. If Spinelli’s script doesn’t necessarily do a wonderful job of depicting the complexities of the relationship between the Seals, it happily goes in the exact opposite direction where it comes to showing the inherent hypocrisy of U.S. foreign policy during this time period. I continually rolled my eyes at Schafer’s machinations, the gleeful way in which he subverts the rule of law, international diplomacy and just common decency. It’s all amusingly terrifying, the sheer joy Gleeson showcases portraying the character equally so.

Liman has always proven to be an idiosyncratically fascinating filmmaker, moving between small independently produced projects like Swingers, Go, Fair Game and The Wall and larger, studio-financed efforts like The Bourne Identity, Mr. & Mrs. Smith and Edge of Tomorrow with relative ease. American Made sits someplace in the middle of these two sensibilities, the film showcasing a political engagement that’s moderately abnormal for a Hollywood production while at the same time remaining a spectacle-fueled vehicle for its above-the-title star, Cruise. If it isn’t always as focused or as deep as I wanted it to be, that does not make the finished feature any less invigorating, this romp into arrogant American excess a tragic flight of fancy well worth taking. 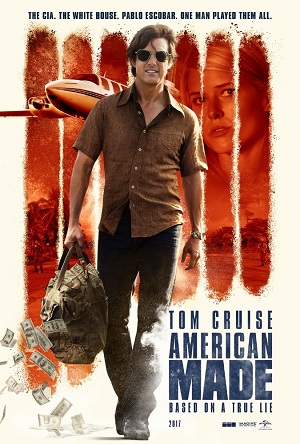