There are so many different ways to think about the groundbreaking film American Splendor from documentarians Shari Springer Berman and Robert Pulcini (Off the Menu: The Last Days of Chasen’s). Funny, life-affirming comedy about the common man? Definitely. Witty docudrama told in an unusual and highly entertaining fashion? Spot-on. A strange and surreal melding of fictional drama and insightful non-fictional insight? Most assuredly. One of the best films to come out this year? A definitive, “Hell, yes!!!” accorded with all the extra exclamation points a statement like that deserves.

For their first narrative feature, the duo turn their sights towards Harvey Pekar’s surly look at Cleveland life, the renowned underground comic book American Splendor. The story of everyday schlub Pekar slaving away at a dead-end job as a file clerk, the film showcases life as it really is: dirty, churlish and melancholic. Yet this is a man who refuses to be beaten down by any of this. Instead, he tunnels out a hermit-like existence rooting around garage sales for jazz records, drifting through coffee shops complaining about the state of the world and huddling like a caveman in his scatter-shot hole of an apartment.

As played by Paul Giamatti, Pekar isn’t the constant annoyance to meet and spend two hours with as that description might sound. This is one of the year’s most spectacular performances. But he doesn’t play the mad genius by himself. Not only do Bergman and Pulcini employ an animated pop-up Harvey (showing up in all his visual incarnation, Pekar having been animated in his comics in differing styles by many artists including Robert Crumb, Gary Dunn and Mark Zingarelli), but the real man in the flesh shows up to narrate and add bits of spicy commentary as well.

It’s a device that in lesser hands could be pretentious and silly. Yet it works amazingly well here. With props from the production all around them and the actors playing the true-life characters in the background chuckling, Pekar adds a dimension that carries American Splendor well beyond the usual comedic biopic. It’s like watching a surrealist painter’s attempt to visualize the literary conceit of stream of consciousness, giving things a phantasmagoric introspectiveness that’s spellbinding.

Which makes the picture even nuttier when you step back and think about it. This is a relatively simple story, after all. It’s the journey of a disaffected guy who started writing a comic book, found true love and made something of his life, doing it all without sacrificing who he is or where he came from.

It all comes littered with lovely little moments which help make life the magical mystery tour it is. Pekar’s enduring friendship with mentally handicapped coworker Toby (Judah Friedlander). The introduction of his battle with cancer. The adoption of a young child. These events are handled perfectly, Pekar’s acerbic wit and off-center personality shining continually shining through all the majestic human mayhem.

Matching Giamatti scene-for-scene is Hope Davis portraying Harvey’s third wife Joyce Brabner. She’s the writer’s romantic match, not giving in easily to his putdowns or dryly bruising way of looking at things. The actress disappears into the unassuming Brabner, giving her an inner beauty and warmth that has as much of an effect on the viewer as it does on her husband. Also worthy of mention are James Urbaniak as Crumb and Earl Billings as Mr. Boats, one of Pekar’s bellicose coworkers.

There is so much of value here, so much to talk about. From Terry Stacey’s camerawork, to Thérèse DePrez’s production design, to the directors’ excellent use of music, American Splendor is an absolute delight. It is a treasure trove of fact and fiction, of reality and fantasy. It is a cinematic journey unlike almost anything else I’ve seen this summer. Leave it to a pair of documentary filmmakers to deliver a comic-based film that’s one of the best of its type I’ve frankly ever seen. 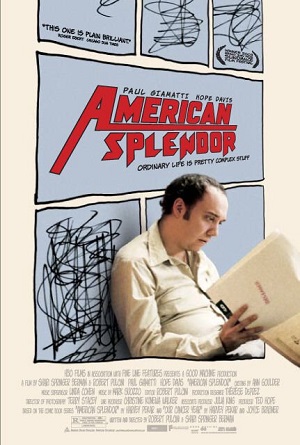