A dozen years after the tragic death of their daughter, doll maker Samuel Mullins (Anthony LaPaglia) and his reclusive, bedridden wife Esther (Miranda Otto) make the decision to offer up their large country home to a small group of orphans and the woman charged with looking after them, Sister Charlotte (Stephanie Sigman). Amongst their group are best friends Linda (Lulu Wilson) and Janice (Talitha Bateman), the latter stricken with polio at a young age and, although recovering nicely, she still hasn’t regained full use of one of her legs. 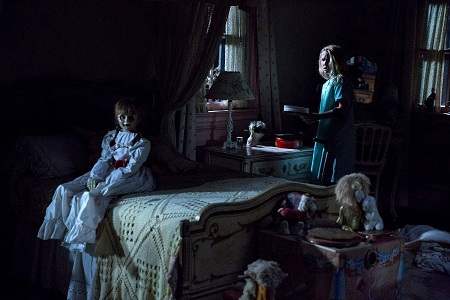 Strange things begin to happen inside the house. Janice is seemingly beckoned by a mysterious force to venture inside the one place in the house they are all forbidden to enter, Samuel and Esther’s deceased daughter’s old bedroom. Going inside, she discovers a secret door leading to a small closet covered in pages pulled from the Bible, a lone doll sitting in the corner staring out into the distance as if it is watching everything that is happening, making insidious plans only it knows about. Soon bizarre, ominous events are taking place inside the house, the battle for the souls of all those living within seemingly about to take place.

Much like last year’s Ouija: Origin of Evil was a prequel that proved to be a monumentally massive improvement over its anemic low budget horror predecessor Ouija, Annabelle: Creation somehow, some way bucks the odds and proves to be a superior motion picture to its woeful 2014 precursor Annabelle, itself a spin-off prequel to James Wan’s 2013 sensation The Conjuring. Incoming director David F. Sandberg, who did a solid job expanding his own short film Lights Out into an entertaining feature-length chiller last summer, proves he’s worth keeping an eye on, his confidently controlled orchestration of this film’s thrills and chills simply wonderful.

It helps that the two main youngsters at the heart of things, Bateman and Wilson, the latter of whom also appearing in Ouija: Origin of Evil, are sensational, the two youngsters delivering chillingly complex performances that allows the blossoming terror to take root with surprising wickedness. They are the reason this story ends up working near as well as it does, the lengths they go to battle for one another’s survival having an authentic richness that was continually compelling. These two appear to be massively talented, showing an ability to convey a variety of emotions with ease, making it easy to get excited to discover what both of them might be capable of in the future if they choose to continue their respective acting careers.

Unlike Annabelle which grew increasingly silly and frankly stupid as it went along, building to a climactic sequence of events that were downright obnoxious, this prequel is much more of a lithe, delicate and intimately disquieting thing. While still following a familiar template and rarely going anyplace too surprising, returning screenwriter Gary Dauberman (Within) still does a nice job maintaining a consistent rhythm as far as the mechanics of this particular story is concerned. More importantly, he doesn’t offer up any pointless twists that undermine anything that has already transpired, and even when things threaten to get too chaotic as events catapult towards conclusion, unlike the last film events still remain character-driven all the way through until the end.

But it is Sandberg who impresses the most. His handling of the material is first-rate, the filmmaker’s ability to allow tension to build at a steadily uncomforting rate just plain marvelous. Much like Lights Out, he’s a fan of long, unrelentingly focused takes, ones where the camera gradually hones in on certain facets of the frame until what is being analyzed creepily appears almost out of the ether. While he does offer up a handful of jump scares, they are almost all organic to the material and connected to each character’s respective journey, giving them more power to affect the audience on a deeply personal level because of this. Sandberg and cinematographer Maxime Alexandre (Maniac, The Hills Have Eyes) present a series of unnerving visual images that both startle and amaze, their mastery of the spaces production designer Jennifer Spence (The Bye Bye Man) has crafted for them never in doubt. 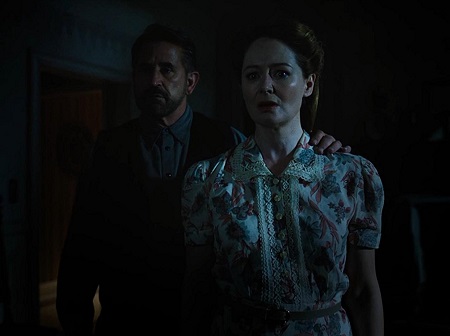 I’m not sure how I feel about this idea to create an entire cinematic universe out of the monsters, demons and ghosts introduced in both The Conjuring and The Conjuring 2, Sandberg’s film forced to work a little overtime in order to drop in hints for upcoming spin-offs featuring ghoulish creatures first seen in those two hit horror films. They’re not necessary, these little asides adding little to the story that is being presented, only taking attention away from Linda and Janice and sending it places, even if only for a second or two, it doesn’t need to wander to. Additionally, for as strong as the overall film might be, it’s not altogether shocking where everything ends up, the overall predictability level as far as the bigger picture is concerned reasonably high.

Yet Annabelle: Creation works. The performances are universally solid, and in the case of Bateman and Wilson so terrific they’re both worthy of individual praise. It also shows additional promise as far as things pertain to Sandberg, and based on both Lights Out and now this I find it difficult not to assume bigger and better things are in store for the director relatively soon. Best of all, thanks to a wildly inspired final scene it even makes me reconsider my dislike of the first Annabelle, the crafty way in which the filmmakers attach the two films together inspired. While that reassessment is unlikely, that I’m even considering it should speak volumes as far as just how good this wily little prequel proves to be, and if this The Conjuring universe really is going to happen, as long as more entries turn out like this than I’m onboard to discover what sort of scares might be on tap next. 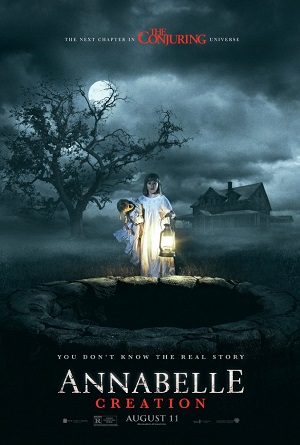