Overgård (Mads Mikkelsen) has been isolated alone in a remote stretch of the Arctic for some time ow. The sole survivor of a plane crash, he’s been using all his wits, skills and intellect to remain alive. He’s set up a way to collect fresh water, a mechanism to fish and has left a variety of signals pointing towards his location for any search and rescue parties that might be looking for him. Overgård is doing just about the best he can, and with no idea where he is or how far anything approaching civilization is from him it makes sense to stay put and hope help soon arrives.

During a massive windstorm lone helicopter flies over the crash site. Initially Overgård thinks he is saved, and even if they are unable to rescue him now due to the storm they’ll certainly report his location and return later to pick him up. But the copter crashes. Salvation is not at hand. Rushing to the downed machine Overgård finds one of the passengers, a young woman (Maria Thelma Smáradóttir), still clinging to life. Pulling her from the rubble he brings her back to his shelter, deciding in that moment he’ll do whatever he has to in order to facilitate her survival alongside his own.

This is how director Joe Penna’s survival thriller Arctic begins. Within the first ten minutes we are dropped into the middle of Overgård’s plight. We are not told what happened. We do not know what led to his plane crash. Not long after that comes the unexpectedly disastrous arrival of the helicopter. We do not know why the copter was in the air. We do not know who the female survivor or her deceased male counterpart are. All we know is that now she is also stranded in the middle of the Arctic nowhere, and without Overgård’s assistance she is likely to share the same tragic fight as her helicopter co-pilot.

It’s visceral, gut-wrenching stuff, especially when you consider that dialogue is kept to a minimum. Overgård is a man of few words, and whether this is due to his isolation or an actual character trait he possessed before his plane crash this is just another question Penna and his co-screenwriter Ryan Morrison choose to leave unanswered. Pair that with the fact the woman he pulls from the helicopter debris doesn’t appear to speak either English or Danish making communication between the two of them difficult. Granted, it’s not like she’s capable of saying much as it is, her injuries from the crash so severe she has precious little strength, floating in and out of consciousness as Overgård tries as best he can to nurse her back to health.

I love all of this. Penna gives the audience credit for being able to put pieces of a story together on their own without a lot of pointless exposition from either he or Morrison to clutter the central dynamic right at the heart of the narrative. Those questions, while intriguing, aren’t important. What matters is that the viewer gets to know who Overgård is right now, in this moment, and that by understanding what makes him tick in this midst of this impossible situation they will sit at the edge of their seat eager to learn whether or not he and the woman will find a way to survive. It’s an effective way to enter a story and Penna pulls no punches as far as depicting with crystalline clarity just how perilous the situation is, this unvarnished, matter-of-fact approach adding a layer of tension that’s remarkable.

At a certain point Overgård realizes the two of them can not remain inside his ramshackle shelter (he’s ingeniously utilized the shell of his aircraft’s wreckage to craft a reasonably decent sanctuary) forever. The woman’s wounds are far too serious for him to be able to treat them with success. As such, he’s going to have to venture out into the frozen unknown and trudge on foot to civilization. Overgård plots a route that should get him to a nearby whaling station utilizing a map he finds in the ruins of the helicopter crash. After packing what he thinks is plenty of food and water he then wraps the woman up in a makeshift sled and heads out on what will hopefully be no more than a five-day hike to salvation.

There are unforeseen dangers that complicate matters for Overgård. The script does a fine job of making each twist and turn feel authentic and not just some plot contrivance inserted to thwart the protagonist from achieving his goal. This ends up being a battle of wills more than it does anything else. Overgård wages war against his own physical limitations while also fighting tooth and nail against the natural elements the Arctic wilderness can throw his way. Unexpected rock formations, impassable cliffs, massive snow drifts, dwindling fresh water supplies, a hungry polar bear, all of that and more comes into play, and through it all Penna showcases these hazards with zero melodramatic embellishment, knowing it isn’t necessary. 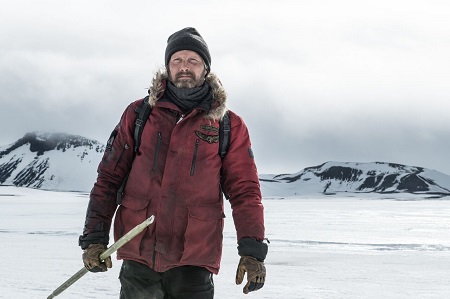 Mikkelsen throws himself into things with determined relish, delivering a materially intense performance that overflows in emotional malleability. The veteran character actor, known for being able to shift from large-scale Hollywood productions like Rogue One: A Star Wars Story and Casino Royale, to small independent features like Valhalla Rising and The Salvation, to reinventing Hannibal Lecter for television, to appearing in lush European productions like A Royal Affair and Coco Chanel & Igor Stravinsky, is his typically impressive self. In fact, it’s quite possible this performance rivals his tremendous turns in both The Hunt and After the Wedding, Mikkelsen’s work in those two films as glorious as anything I’ve been lucky enough to watch this young century. The actor brings a level of intense physicality that is coupled with a level of emotive sensitivity that’s superb, all of which allows the decisions Overgård makes during his trek ring with a forceful veracity that’s outstanding.

I’m not entirely sure Penna earns his story’s final seconds, but even if he didn’t I still love the fact that as a filmmaker he refused to make things easy for the audience all the way right up to the end. There is also a level of dramatic certainty to this production that is moderately troublesome, and for all the surprises the film attempted to throw my way I honestly can’t say I was ever all that shocked by anything that eventually happened.

Not that it matters. Tómas Örn Tómasson’s camerawork is suitably sparse in its visual elegance, the cinematographer utilizing all of the isolated, treacherously bleak locations (the film was shot in Iceland) magnificently. I also couldn’t help but feel that composer Joseph Trapanese’s (The Greatest Showman) lushly minimalist score suited things nicely, Penna utilizing it with a sparse intensity that’s masterful. Arctic is a fine thriller that stuck with me long after it had come to an end, its existential exploration of humanity’s will to survive under the harshest of conditions a hypnotic cinematic sojourn I’d willingly go on again at a moment’s notice. 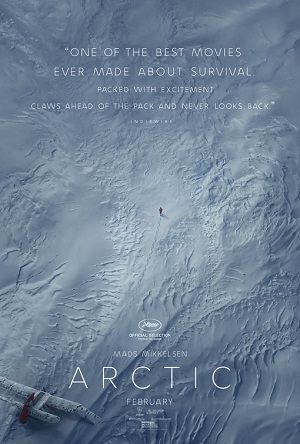