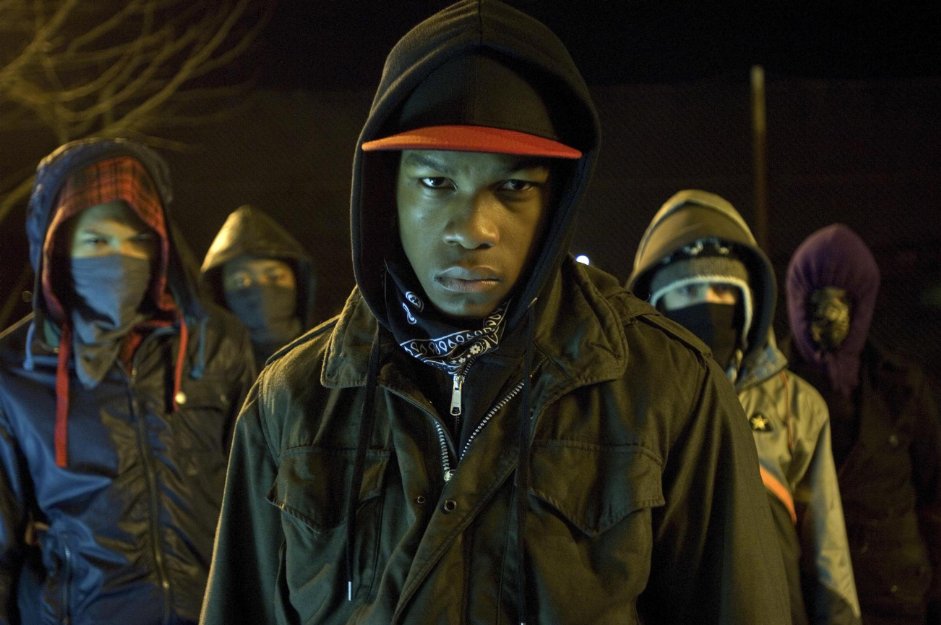 “Attack the Block” – Interview with Joe Cornish and John Boyega

(NOTE: With “Star Wars: The Force Awakens” opening today I thought it would be fun to revisit a 2011 interview I conducted with one of the film’s biggest stars, talented newcomer John Boyega.
– Sara Michelle Fetters, Editor-in-Chief)

Joe Cornish’s Attack the Block is the sort of giddy B-movie where you can’t keep from thinking the darn thing can’t get any better and then it magically does. An effervescent combo of Assault on Precinct 13, Gremlins, Rio Bravo and countless other genre pictures, the movie concerns itself with a South London apartment complex that suddenly finds itself under assault by creatures from outer space. 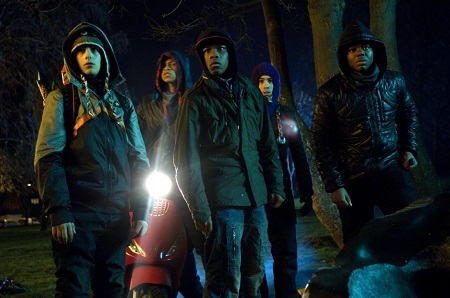 The only thing standing in their way? A collection of teenage hooligans who only moments before the invasion began were mugging an innocent nursing student on her way home from work. Suddenly forced to become heroes, the group – under the leadership of the stalwart Moses (newcomer John Boyega) – must team-up with the woman they just robbed to stop their block from being literally devoured by a pack of carnivorous trespassers.

It’s without a doubt the summer’s most intoxicating and joyfully entertaining popcorn experience, Cornish’s theatrical debut a lightening in a bottle sensation deserving of becoming a smash. So it was with great relish I sat down with the filmmaker and his teenage star to talk about their experiences making the film, and much like the picture itself our much too brief discussion did not disappoint.

“It was nerve-wracking,” admits Cornish talking about taking the film to Austin’s South by Southwest Film Festival back in May. “That was the first time we’d shown the movie to a proper audience and that was scary. You put your heart and soul into something and it’s exposed; you feel like you’re dancing naked on a table. To have that kind of overwhelmingly positive response from [the audience] afterward was just amazing. In fact, I don’t think we’d be here talking now had that not happened. That screening got the ball rolling, that’s for certain.”

Best known as one half of the British comedy duo “Adam and Joe,” the collection of BBC comedies he helped produce, write and star in starting in 1997 are the stuff of legend. Yet, for all the laughs and for all the smiles it generates, Attack the Block couldn’t be any further from Cornish’s roots, and that’s exactly the way he wanted it when he decided to write and direct his first feature.

“For me it was a cool combination of my neighborhood, what I’d cared about and where I grew up in as a boy and a young man in South London,” he explains, “and I really care about my neighborhood and the people who live there. Some things I’ve found questionable about the way that world is portrayed in movies and in the media so I had something to say about that.”

“Also, I love creature movies. I love E.T., I love Gremlins, I Predator, I love Ghostbusters, I love old school adventure movies, I love old school effects, [and] this idea for Attack the Block was just perfect to mash together some of the thing I care about. It spoke to me and I just knew I had to make it.”

As for Boyega, taking on the part of Moses couldn’t have been more of a challenge. Not only is the movie so unusual in its structure and in its plot, but the teenager was also asked to inhabit on a roll that could easily be classified as unlikable. Worse, if he didn’t find away to engender the audience’s empathy and make the transformation from villain to hero believable the whole project would come crashing down, a large part of its eventual success or failure riding on him.

“I thought it was amazing the first time I read it,” he comments about the script, “but I had no idea how I was going to do it. There were all these stunts. The character had this great transformation to make. I didn’t know how they were going to stage everything. It was just so crazy.” 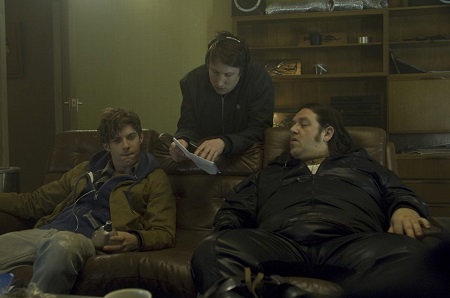 “But I felt so excited to be a part of it. I think it helped that I didn’t have a lot of wisdom, a lot of training as a professional actor going into it. I just thought to myself I’m going to be Moses, I’m going to inhabit him as best I can. I made myself notes based on the script, figured out where I needed to show new little bits of his personality. I knew which parts of him I was going to show at certain times in the script and I found that helped me out quite a bit. It was really helpful; helped me make Moses a normal human being with lots of layers.”

For someone with no training or real experience, listening to Boyega talk about how he approached the characters and his different stages of emotional evolution one could be deceived into thinking they were speaking with a seasoned professional. This fact is not lost on Cornish.

“We saw 1,500 kids for the part,” states the director, “and I was waiting the entire time for Moses to walk through the door. When John did walk through that door I felt immediately like we had him. He had the right look, the right temperament, the right manner and it was very clear out of the many auditions he was serious about it and was ambitious about giving his all for the part.”

“But you never know what you’ve got until you start shooting. It’s kind of a risk, isn’t it? So I couldn’t have been more excited that he went to work so prepared and came through for the film in such a big way. I keep saying that I think he’s going to be big. John is a major talent and I am certain he is going to be recognized for it sooner rather than later.”

By and large, save for the presence of Nick Frost as a lackadaisical drug dealer living in the apartment complex, the entire cast is made up of relative unknowns much like Boyega. Yet together they create an energizing ensemble presence making the film’s outlandish scenario a bit more plausible.

“I like indie movies and foreign movies where you don’t recognize the actors, film’s that are devoid of stars,” he explains. “I really believe they’re the people they’re portraying, and I thought it would be useful for this particular story to use unknowns in most of the major rolls. You don’t bring any exterior baggage in connection to these faces, and I thought that would make it a cleaner journey. These characters start off completely anonymous, you don’t recognize them as actors, and they’re identity is formed by the story.”

“It was also important to me that they be young. The whole point of this film is that they’re children and children make mistakes. More importantly, children in a tougher environment make even tougher mistakes, and I wanted people to believe and understand that fact right from the start. You can’t forgive what they’ve done or excuse it but you do have to recognize that the circumstances shape the person to a degree, and it was important that I have young faces in order to make that fact more believable for the audience.”

For Boyega, working in an ensemble filled with fellow relative beginners bordered on incredible. It allowed the group to bond and fasten friendships that made their fusion as a cohesive unit inside the world of the film all the more credible, a fact the actor relishes.

“We really were the best of friends by the time we started shooting,” states Boyega. “We all came up together during the auditions, and through the rehearsal process we all got to know one another even better. All the conversations, the way we interacted together, we had loads of time to bond so when we got on set all the time we’d spent getting to know one another just made our jobs even easier.”

“It was there from the beginning. It was important that our relationships be real right from the start. And it was, mainly because it was in real life. We felt that as a group and as friends, and I think that shows in the film and it’s one of the reasons why audiences are responding to it so positively.” 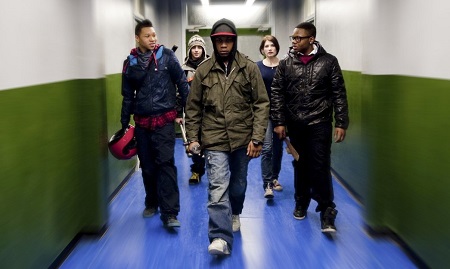 With so much advance buzz and with critics falling all over themselves in praise of Attack the Block, it’s impossible not to wonder if Cornish is starting to feel the pressure. Not so much for this film to perform because in many ways it already has making its ultimate box office fate, while hopefully positive, not that big of an issue. No, the pressure is now on the follow-up and whether or not the director will avoid the dreaded ‘sophomore slump’ that has stymied so many other young filmmakers.

“You tell me?” he asks with a gigantic grin. “The honest answer is that I don’t know; I don’t know what I want to do next and I don’t know how you ‘avoid a sophomore slump’ as you put it. I’ve got other ideas I want to do and I’d feel very excited and very luck if this film helped me realize those projects. I’d love to work with a bigger budget. I’d love to work on a bigger scale. But right now I’m just taking it slowly, one moment as a time. All I can do is try to make the best movie I can, like I did with Attack the Block. No matter what I do next or what scale I work in that’s the point of view I’m going to have.” 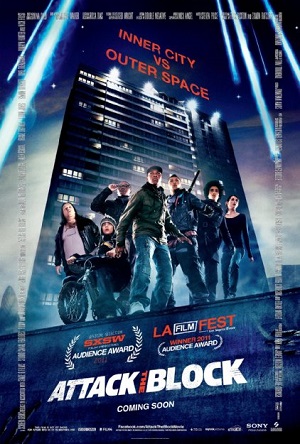