Abrams’ Star Wars Brings Balance Back to The Force

One can’t help but walk into Star Wars: The Force Awakens without a great deal of trepidation. While the prequels, which began back in 1999 with Star Wars: The Phantom Menace, carried their own baggage, director J.J. Abrams’ and company’s return to the core events of creator George Lucas’ original trilogy are a whole different ball of wax. For many, myself included, the initial Star Wars trilogy was a cinematic rite of passage, all of it leading to places of imagination and adventure that have stuck with the majority of viewers for four-plus decades now.

If Abrams had a seemingly impossible task as it pertained to his reboot/reimagining of Star Trek in 2009, the challenge here is unfathomable, the director tackling the iconic Star Wars franchise by bringing back all of the principal 1977 players while also introducing a number of new faces for modern audiences. He is asked to compose a story and scenario that will launch a new trilogy, one that pays deft homage to Lucas’ first set of films yet also erases the bad taste left in the mouths of many who found the prequels underwhelming.

With the aid of Little Miss Sunshine Oscar-winner Michael Arndt and, arguably more importantly, franchise returnee Lawrence Kasdan (a screenwriter on both The Empire Strikes Back and Return of the Jedi, but also the writer/director of complex, character-driven genre fair like The Big Chill, Silverado and Body Heat), Abrams accomplishes his task. Not perfectly. Not without a lump here and a bump there. But overall? Beginning to end? The Force Awakens is a triumph, and whether one is a fan of Star Wars or a newcomer uncertain what all the fuss is about this is a science fiction spectacular worthy of celebration.

It has been thirty years since The Empire fell, the Emperor was defeated and the Rebel Alliance scored a major victory for freedom and democracy throughout the galaxy. In that time, a new evil has grown, the nefarious First Order, while the rebels have blossomed into the Resistance; both armies in a desperate race to find the whereabouts of the last remaining Jedi Knight, the one and only Luke Skywalker (Mark Hamill). With time growing short, General Leia Organa (Carrie Fisher) has sent her most trusted pilot, Poe Dameron (Oscar Isaac), to the backwater desert planet of Jakku, looking for the final pieces of a puzzle that has mystified them all for over a decade.

By happenstance, fate or something greater, maybe even mystical, the missing information, the key to learning where Skywalker is, has found its way to scavenger Rey (Daisy Ridley). Assisting a lost BB-8 droid, aided by a former Stormtrooper calling himself Finn (John Boyega), she is forced to flee Jakku with a whole fleet of First Order warriors, led by the powerful Kylo Ren (Adam Driver), hot on her tail. When all is at its worst, when hope appears lost, a rogue smuggler comes to Rey and Finn’s aid as if drawn there by destiny, ex-Rebel leader Han Solo (Harrison Ford) and his best friend and co-pilot Chewbacca (Peter Mayhew) swooping in just when needed most.

There’s plenty more to say, but to do so doesn’t feel right. Abrams, Kasdan and Arndt haven’t designed a story filled with surprises (most of them are pretty easy to figure out) so much as they’ve engineered one that the realization of what is about to transpire hits the viewer like an out-of-control Tie Fighter. What is learned, who is who and what is what, all of it matters, not just so much in regards to the greater picture as far as the new trilogy is concerned but also as it pertains to the narrative here. The filmmakers maintain remarkable focus, a singularity of purpose, doing yeoman’s work fleshing out Rey and Finn while also giving Solo an astonishing arc no fan of the series will ever be able to forget. They also set up an intriguing villain in Ren, and seeing where he goes next, and how his descent will be juxtaposed by the ascent of his forceful doppelganger, has piqued my curiosity something fierce.

Boyega, Driver and Isaac all acquit themselves admirably, each delivering rambunctious, full-bodied performances that do the series proud. On the flip side, Domhnall Gleeson fumbles around as the risibly evil General Hux, puffing out his chest and locking his shoulders with authority yet still unable to make this villain feel vital or noteworthy at any point. As for Gwendoline Christie as Stormtrooper leader Captain Phasma, she’s got precious little to do, so here’s hoping the trilogy does more of merit with her at some point in the next two adventures.

As for the original cast, there is Ford and there is everyone else, the veteran superstar the only one of the initial Star Wars trio given all that much to do. He’s more than up to the challenge, and for all his documented reticence over the years to return to Han Solo he sure seems to be having quite a blast slipping back on that signature leather jacket. He shares a pair of sensational scenes with Ridley, one sitting next to her in the Millennium Falcon, no less, that are just superb, while a climactic sequence that sets the course for where things go next is unbelievably powerful in large parts thanks entirely to him, the actual actions that transpire not nearly as surprising as I can’t help but think the filmmakers themselves intend them to be.

Then there is Ridley herself. As far as coming out parties go, the one the young actress has as Rey is astonishing, cementing the character as an instant Star Wars essential as well as a figure fans and non-fans alike are going to be cheering for without reservation. It is immediately apparent this new trilogy is going to revolve in large parts around her, the journey this orphaned scavenger is about to undertake one I can’t help but be intrigued by. Ridley delivers a vigorously emotional performance, her reactions wondrous, and by the time she finds the courage to take a heroic step forward I was all but ready to climb out of my seat, leap up onto the screen and take it alongside next to her.

Beautifully shot by Dan Mindel (John Carter), featuring an amazing array of practical and digital effects that are continually eye-popping, the most important technical facet remains John Williams’ (Jurassic Park, Superman) instantly recognizable score, the veteran Oscar-winning composer delivering deft orchestrations and memorable themes that fit the on-screen action flawlessly. There’s also some deft motion capture work turned in by 12 Years a Slave Academy Award-winner Lupita Nyong’o, but the less said about her and what her character is doing the better, audiences deserving to learn that information for themselves.

I will say the movie moves too fast at times, almost as if Abrams is worried if he slows down viewers will lose interest. Also, he, Kasdan and Arndt follow signature moments and ideas from the original trilogy too closely, and once the big threat to the Resistance is ascertained there is a feeling of interstellar cinematic déjà vu difficult to initially get past. Finally, as marvelous as the last scene might be – and it is really, really wonderful – the climactic cliffhanger is slightly annoying, and I’m not altogether certain everyone is going to be happy with it.

Be that as it may, the moment that Lucasfilm logo appeared on the screen, the second the theme came blaring through auditorium, I was suddenly a wide-eyed three-year-old again, shedding a couple of tears for a movie that hadn’t even shown its first character let alone depicted its initial star fighter flashing across the screen. Abrams doesn’t just live up to that reaction, he makes me glad I had it, Star Wars: The Force Awakens giving new life to a franchise of hope, resilience, courage and family that’s been missing from theatres for far too long. 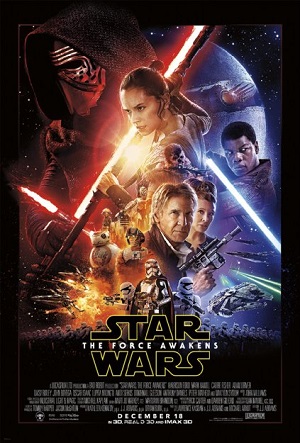