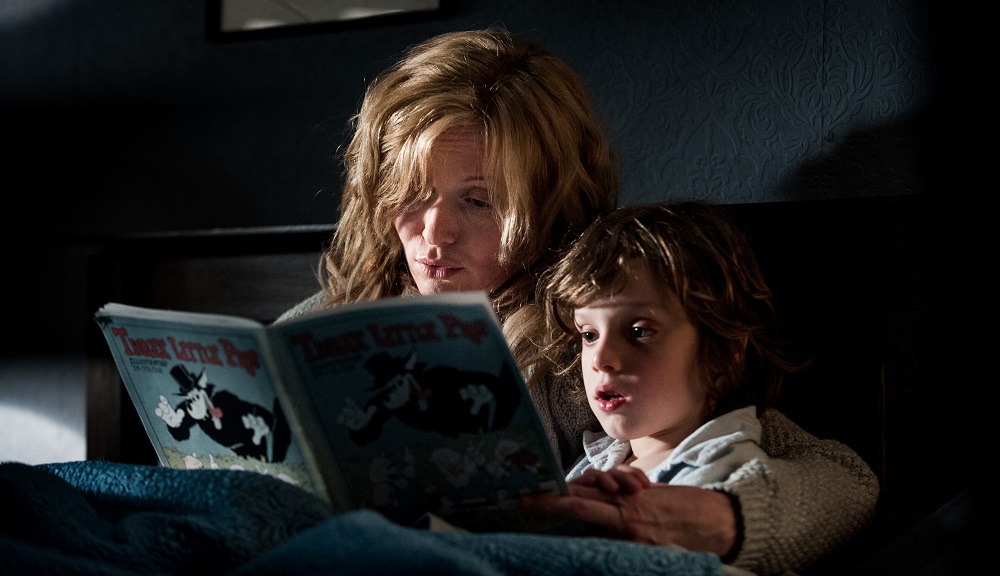 It’s been six years since her husband’s violent death, Amelia (Essie Davis) hardly psychologically recovered from the loss. The single parent barely has the ability to care for her son, Samuel (Noah Wiseman), incidentally six-years-old, the child acting out to the point of being uncontrollable. He worries something out there wants to do them harm, designing a variety of homemade contraptions he thinks will protect him and his mother from certain death. 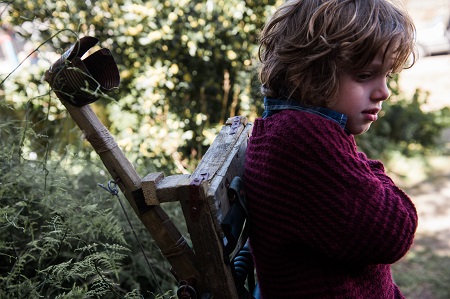 A strange new pop-up book with a sinister and disturbing fairy tale contained within mysteriously appears on Samuel’s bookshelf. He believes the malevolent creature bursting from its pages, the Babadook, really exists and is coming to claim both he and his mother as its next victims, and while Amelia does all she can to ease her son’s fears after a number of sleepless nights and ominous occurrences she’s suddenly not so certain he’s wrong.

Thus begins The Babadook, the impressive writing and directing debut from Australian filmmaker Jennifer Kent. Unsettling, thought-provoking, filled with startling visuals coming from a place of pure, uncompromising emotional truth, the film is an oftentimes devastating look at loss, death and regret coupled with the responsibilities of parenthood that hits extremely close to the bone. It doesn’t let up, keeping Amelia’s wavering psychological state at the center of things throughout, delivering up a powerfully honest conclusion to this small family’s travails and woes that is instantly unforgettable.

But is the movie scary? Honestly, I didn’t really find it so, none of the stuff involving the actual creature itself doing a lot for me one way or the other, his Freddie Kruger meets something out of “Supernatural” visage more creepy than it was terrifying. At the same time, I’m not positive the film is supposed to be scary, Kent more interested at looking at the underlying emotional motivations driving Amelia onward than she is in delivering a typical fright fest. This isn’t so much an entry in the horror genre as it is an examination of a woman still under the strains of deep, unresolved feelings of trauma and loss, the death of her husband keeping Amelia in a state of emotional stasis it takes the likes of something like a razor-clawed demon to jumpstart her back to something even resembling sanity.

Davis gives one of the best performances you will see this, or in any other, year. Her Amelia is a whirling, twirling ball of doubt, uncertainty, pain, resilience, self-sacrifice and unconditional love, each emotional layer battling with the next with the future of both her and her son riding on the outcome. Rare is it to see an actor so willing to throw themselves into such a role with this much passion, this type of nakedly raw abandon, Davis not caring whether audience so much like the character as they instead understand, and feel for themselves, all it is she’s dealing with.

As for Kent, her visual eye is matched by her keen insight into her characters as well as her visceral sense of pace. Never rushing things, never hurrying the action, at the same time the film never drags, doesn’t contain a false beat. The director develops things bit by bit, ounce by ounce, allowing situation and moment to influence action and thusly sees her two protagonists blossom with three-dimensional exactitude. Kent never wavers as to where she wants to go and how she wants to get there, allowing the climactic sequences to come alive in ways they never would have been able to otherwise.

What’s most remarkable is that the filmmaker accomplishes all she wants to even though she revolves the entirety of the main events around two characters who are rarely likeable. Amelia, in many ways, is a bad mother, allowing her insecurity and pain left by the death of her husband to keep her from taking care of Samuel as best she could. As for the kid, he’s whiny, prone to loud outbursts, acting out to the world around him in ways that are shrill and discombobulating. Together, this pair should be insufferable, difficult to spend anything close to 93 minutes with, their competing emotional malignancies a tornado of interpersonal tumult I normally would have found infuriating.

But I didn’t, not even in passing, Kent’s intimate and intricate script revealing its secrets with shocking, obdurate ease. I got swept up inside Amelia and Samuel’s stories in ways that consistently caught me off guard, and anyone who has ever lost someone close to their hearts is going to relate to all the pair is going through even with the supernatural ghoulishness augmenting the narrative. The filmmaker weaves an impressively elaborate web, the core elements sticking to me in ways I couldn’t help but respond to.

The lack of scares is a problem; this is a noticeable deficiency I can’t help but feel a little uneasy about. All the same, Kent has manufactured a drama about how we deal with loss and tragedy that hits home in ways that are astonishing. Aided by Radoslaw Ladczuk’s stunning, crisply elegant cinematography, with overall tensions enhanced thanks to Jed Kurzel’s (The Snowtown Murders) bruising, beautifully eerie score, The Babadook is a wonderful debut, one of the best of its kind 2014 has seen. Kent has undeniable talent, that is for certain, seeing what she does with it one of more intriguing cinematic mysteries still to be answered. 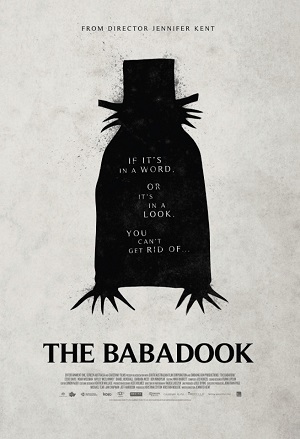