Pitch-Black Banshees is a Magnificent Comedy of Human Terrors

The Banshees of Inisherin is as perfect a motion picture as I’ve seen in ages. For writer-director Martin McDonagh, the film is an absolute triumph and easily his best work since 2008’s In Bruges. Heck, it may be even better than that, but only time will tell.

The connective tissue between that gleefully vulgar crime comedy and this new effort is the presence of stars Colin Farrell and Brendan Gleeson. Their reunion with McDonagh is cause for celebration. It is as if working together again has led the trio to up their collective game to stratospheric heights. McDonagh’s writing is the sharpest and most cunningly incisive of his career. A suitably grizzled Gleeson commands the screen, towering above all comers with a penetrating glare that pierces the heart and leaves a lasting scar. As for Farrell, this is the performance he will be remembered for, a titanic, emotionally bone-shattering tour de force people will be analyzing, debating, and most of all enjoying for decades to come.

On an isolated island off the west coast of Ireland, farmer Pádraic (Farrell) and musician Colm (Gleeson) are having a row. Although they have been lifelong friends, Colm has decided, for reasons entirely his own, that he simply does not like Pádraic anymore. Simple as that. Plain as day. As far as he’s concerned, nothing more needs to be said on the matter.

No one in town understands what’s going on, Pádraic in particular. He tries to talk it out with his sister Siobhán (Kerry Condon) and gets some nonsensical advice from young roustabout Dominic (Barry Keoghan), the troubled son of the local constable, but mostly, the farmer is forced to figure things out on his own. But it doesn’t make any sense. And even though Colm has stated he’ll do something horrifically unthinkable to himself if his former friend speaks even a single word to him, Pádraic is certain that if they talk it out, the two will be back sharing a pint at the local pub before the week is up.

What follows is a pitch-black comedy about human nature, conflict, midlife malaise, unfulfilled dreams, lost loves, regret, and forgiveness that grabbed me by the throat and refused to let go. But there’s something more. McDonagh sets his story during the 1922–23 Irish civil war. The islanders can hear and see societal changes taking place just across the bay, with pillars of smoke rising above the water set to the sudden thundering of canon fire or the staccato beats of one rifle shot after another.

It is this world in seemingly never-ending crisis that spurs Colm to action. It is this same world that forces Pádraic to believe that their differences must be put aside, almost as if the reforging of their friendship might plant seeds of peace that could spread back to the mainland. Neither man is right, but both think they are, and while some, like Siobhán, can see how things are destined to spiral out of control, most townsfolk are too befuddled by the sheer lunacy of this feud to understand that tragedy is stalking, not just Pádraic and Colm, but all of them.

McDonagh doesn’t rush things. There is an absurdist wit to the early sequences that’s almost Monty Python-esque in its obtuse flippancy. But as Colm begins to explain why he has decided to no longer be friends with Pádraic events confidently shift onto a much darker path. What makes it hurt even more is that it’s easy to understand where the aging musician is coming from. His desires aren’t outlandish. His dreams of having his name live on after he’s gone universal in their contemporaneous magnitude.

Once Colm shows how far he’s willing to go to force Pádraic to stop speaking to him, it becomes horrifyingly clear where things are headed. But while the last act doesn’t offer any narrative surprises, that does not mean the finale McDonagh has concocted for his two sparring partners is ineffective or disappointing. Far from it. The fiery conclusion stopped my heart cold, and the tears I shed for both men, as they inadvertently succumbed to an inner darkness neither knew was there, ripped me to shreds.

There’s so much more to dig into: The ways Siobhán’s pursuit to break free from the island’s grip on her future shifts how Pádraic will react to Colm’s ultimatums. How Dominic’s pursuit of an honest emotional connection subtly feeds into the bigger picture. There’s also Pádraic’s beloved donkey and Colm’s affectionate dog, each animal an essential piece of a bigger puzzle that, once assembled, shows how humanity can be stripped naked to its barest essentials in a matter of seconds.

But digging too deep would spoil the magic, The Banshees of Inisherin unquestionably one of the year’s best films. 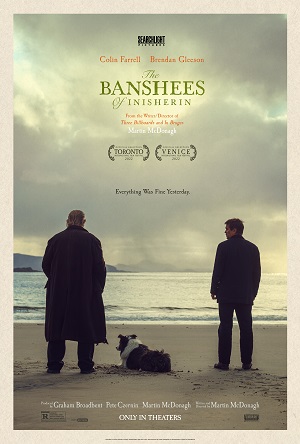