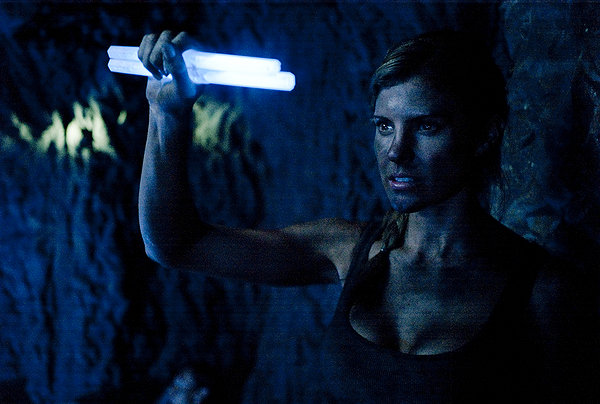 For coal miner George Marsh (Jeff Fahey), today is the last day he’ll be doing the one job he’s ever known. The core members of his crackerjack team, including young gun Randy (Joey Kern) and crew foreman Mundy (Brent Briscoe), are all insistent they’ll be down there with him for that final dig. Heck, even his environmentalist daughter Samantha (Kelly Noonan) has gotten permission to spend time underground with dear old dad, and even if she doesn’t approve of his job she still wants to lend her support before he heads off into a semi-forced retirement.

A routine day turns into anything but when a drilling machine malfunctions leading to a disastrous cave-in that tragically kills the majority of George’s crew. It also leaves him, his daughter and a small handful of others, including Randy and Mundy, trapped in a small section of the mine forced to pray for a rescue that might not come. With time running out and tensions starting to soar, Samantha begins to have eerie visions of murder and mayhem, past intersecting with present in ways she can barely fathom let alone comprehend. As the body count begins to rise it soon becomes apparent this ragtag unit is going to have to take action if they are going to survive, hoping against hope that the hallucinations George’s child are having won’t end up coming true.

Beneath makes the proclamation that it was inspired by actual events although the film’s production notes don’t go into any detail whatsoever about which mine disaster Patrick Doody and Chris Valenziano’s script is actually culled from. If anything, the movie owes more to Neil Marshall’s 2005 subterranean classic The Descent than it does to anything else, similarities between the two fairly obvious once the main narrative mechanics kick into high gear.

Which is something of a minor pity because, until those parallels become so obvious director Ben Ketai’s second feature-length effort – he made his debut with the straight-to-DVD sequel 30 Days of Night: Dark Days – shows a great deal of promise. Once you get past a few minor questionable elements, the initial setup leading to the actual cave-in itself is rather wonderful. The character interactions feel authentic, the settings gritty, oozing in hardscrabble realism, while the actual destruction of the mine itself is breathtakingly tense.

Even better are the moments right after, the survivors crowding into a sterile metal box supposedly for their own safety but for all intents and purposes looking more like rats trapped in a cage more than they do anything else. Watching them all lose their marbles as they deal with the inherent claustrophobia of their situation filled me with palpable dread, and as things progressed it was clear some, maybe all, of the remaining miners would make friends with insanity decreasing their collective chance of survival by a whole heck of a lot. 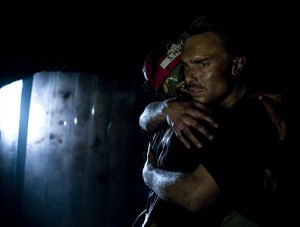 Then comes the weirdness. Then comes the bizarre. Then comes Samantha’s questionable visions some of which showcase scenes of horror and tragedy of a similar mine collapse many decades before the one’s she’s currently trying to live through. The group ends up leaving the safety of their bunker to explore regions of the mine closed off for generations, and once they do the scares Ketai and the screenwriters begin to dream up are a whole lot less interesting than the ones they initially engineered.

Yet this is a handsome production all the same, the visual look engineered by cinematographer Timothy A. Burton coupled with Michael Barton’s design work impressive indeed. The film is also expertly edited by Toby Wilkins, each scene blending into the next with a sinister seamlessness that’s continually intriguing. Ketai shows a great deal of confidence as he captains events to their conclusions, and at a brisk 89 minutes it isn’t like the motion picture comes even slightly close to wearing out its welcome.

All of which makes its obvious shortcomings that more difficult to stomach. The supernatural undertones don’t sit well with the real world elements the majority trades in. I get where the filmmakers were wanting to go, understand that the idea as to blur the psychological state of those trapped inside their underground tomb to the point I as a viewer might be able to relate to the growing psychosis and paranoia ripping them apart. Problem is, not only is the balance off the extraneous stuff involving the previous tragedy and Samantha’s visions of it are just plain silly. Beneath just doesn’t work, and as good as the opening half might be the second just doesn’t make the grade. 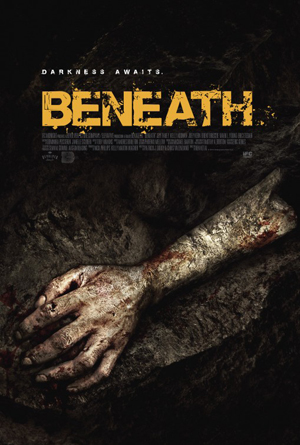