Months after he goes missing and is presumed dead, estranged brothers Gordon (Graham Skipper) and John Hardesty (Chase Williamson) reunite to close down their father’s video store, a barely functional relic to the bygone days before Netflix, Hulu, Redbox and Amazon Prime dominated the home viewing market. While cataloging the numerous VHS tapes, VCRs and other rentable items, the pair come across an old, late ‘80s horror video board game promising to take the player to places beyond imagining.

With Gordon’s girlfriend Margot (Brea Grant) joining in, the brothers decide to give the game a try but are immediately startled when the retro mistress of ceremonies, Evelyn (Barbara Crampton), begins to lay out ground rules for playing that sound like she’s speaking to the brothers directly. There is a supernatural fury to this piece of VHS entertainment that’s as bloody as it is relentless, doling out death and destruction with casual ferocity. Now, with their souls in jeopardy of being sucked through the gates of Hell, Gordon and John must work together to beat the game, and in the process save their beloved father from a fate far worse than death.

Beyond the Gates is as silly as it sounds, Jackson Stewart’s directorial debut a pulpy bit of schlock horror absurdity that doesn’t do a heck of a lot more than its demonic Jumanji premise brazenly hints at. Working with co-writer Stephen Scarlata (Final Girl), the filmmaker doesn’t do anything more than what is expected. It’s a tidy movie, never going too far afield or trying to subvert its scenario in ways that caught me unaware, and as such I had the majority of its twists and turns pegged long before Stewart was ready to unleash them.

That’s the bad news. On the other side of the coin, after a rather blasé setup, Stewart shows himself able to unleash imaginative, gore-filled carnage with the best of them, and once the game decided to make its mark on Gordon and John’s friends and acquaintances I couldn’t help but be curious to discover who would get eviscerated next. The bloodletting, while not gratuitous, is still extreme, but in a suitably throwback fashion reminding me of any number of 1980s John Carpenter/Joe Dante/West Craven knock-offs made by lesser directors who didn’t have either the budgets or the skill set to do as much with so very little as those three oftentimes did. It’s just plain fun, and whether the two were popping keys out of the gelatinous brains of the freshly dead or battling zombies in the ghoulish basement of their family home I couldn’t help but enjoy what was going on no matter how absurd events might prove themselves to be.

The other plus here is Crampton, the veteran horror icon of everything from Re-Animator to Chopping Mall, From Beyond to Castle Freak, You’re Next to We Are Still Here having what appears to be a blast vamping it up as the VHS board game hostess. While she doesn’t get to do a lot, the nature of the role understandably handicapping her as far as chances to explore the character are concerned, that doesn’t mean the actress doesn’t make an impression. She’s funny, alluring, spooky and terrifying, usually a combination of all of the above at any given moment, and watching her revel in her dark demonic power is unconditionally divine.

The relationship between Gordon and John is explored with suitable profundity, digging just deep enough that the reasons for their estrangement are clear while at the same time the brotherly bond that keeps them wanting to reconnect and repair the damage is rudimentarily authentic. Skipper and Williamson do a nice job bringing things to life, while the growing revulsion that slowly overwhelms them has a manic energy that fits film’s scenario nicely. Grant, on the other hand, is wasted as Gordon’s girlfriend, the film seemingly not really knowing what to do with her, transforming Margot into nothing more than a standard damsel in hypnotized distress I found disappointingly tiresome.

No matter. Beyond the Gates, while far from a masterpiece, is hugely entertaining if one is in the right frame of mind when watching it. Stewart has crafted a debut that looks terrific and sounds even better, while his ability to shock and startle with an increasingly awesome array of gore effects is impressive. For fans of the genre taking the time to give this movie a chance is a relative no-brainer, the final product a cinematic game of comically gruesome bloody nastiness well worth the time it takes to play. 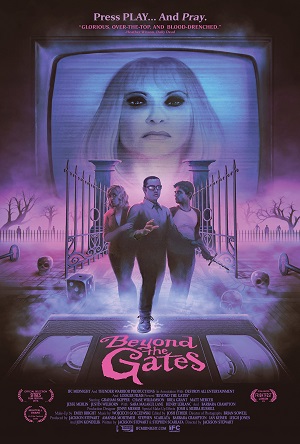