If you thought that Romanian director Cristian Mungiu would follow up his devastating 4 Months, 3 Weeks and 2 Days with something as equally emotionally destructive than you’d have been correct, his 2012 Cannes Film Festival entry Beyond the Hills not exactly what anyone would ever describe as light entertainment. Inspired by the non-fiction novels of author Tatiana Niculescu Bran, novels I now feel the urge to seek out and explore for myself, the movie is a brutally unflinching examination of faith and friendship that stripped me down to the marrow. Not for the faint of heart, certainly not for anyone looking for a pleasant diversion or a happy night out at the multiplex, Mungiu’s latest is nonetheless a fantastical stunner and, without question, a work of art I’m unlikely to soon forget. 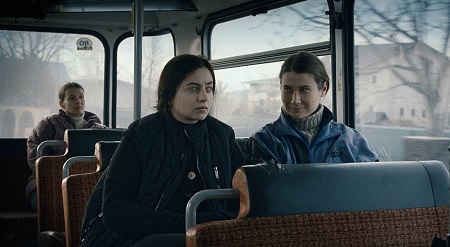 Alina (Cristina Flutur) has returned to the small rural Romanian village of her youth to visit childhood friend Voichita (Cosmina Stratan), now living in an isolated Orthodox convent far removed from modern civilized conveniences. Not exactly amused by what she finds there, Alina urges Voichita to return with her to Germany, where they both grew up as orphans and established their sisterly bonds.

Voichita, however, has embraced her faith, feeling as if she has discovered the family she never knew as a child while living with the nuns, the Mother Superior (Dana Tapalaga) and their Priest (Valeriu Andriuta). But a bizarre series of events makes her start to question whether her feelings and desires have been misplaced, the religious authority urging her to believe that Alina is sick, possessed and even in need of an exorcism.

As films about faith revolving around female characters go, Beyond the Hills is never going to be uttered in the same breath as say The Song of Bernadette or The Nun’s Story. Mungiu looks at Alina’s unwavering faith and religious enthusiasm as more of cross to bear than a symbol of hope or pride, making no bones about picking apart how institutions meant for the good of all can so easily be corrupted and perverted into something uncompromising and vile. While religion is not mocked, using it for misbegotten irredeemable ends in the name of a Lord who if he/she existed would unquestionably disapprove of certainly is, the director taking these corrupt practices to task in a way that is unsparing in its naked brutality.

He’s also crafted a narrative of free will and love that’s gorgeous. The way these women feel for one another, how they look at life, what they want, what they yearn for, all of it is pure and genuine, and it’s hard not to respond to the two on an emotionally visceral level. Both Alina and Voichita make decisions they believe is for the good of the other, their undying affinity an unbreakable bond that makes the heartrending tragedy likely to come all the more overwhelming.

At over a 150-minutes, Beyond the Hills isn’t an easy sit. Mungiu isn’t afraid to take his time and does tend to draw some scenes out a bit longer than might be necessary. On a more positive front, the director’s use of quiet is as startling as ever, while the images he and cinematographer Oleg Mutu (The Death of Mr. Lazarescu) paint are potent and vital. The performances of his two leading ladies are meticulous in their intricate nuances, both Flutur and Stratan simply spellbinding. While the movie may not rise to the same internally crippling, instantly classic heights of 4 Months, 3 Weeks and 2 Days, that does not make it any less extraordinary, Mungiu proving once again he’s one of the premier cinematic talents of our time and as such a filmmaker to keep a constant eye upon. 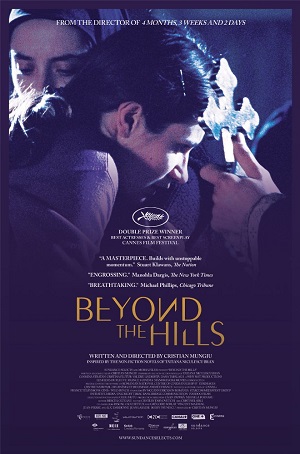