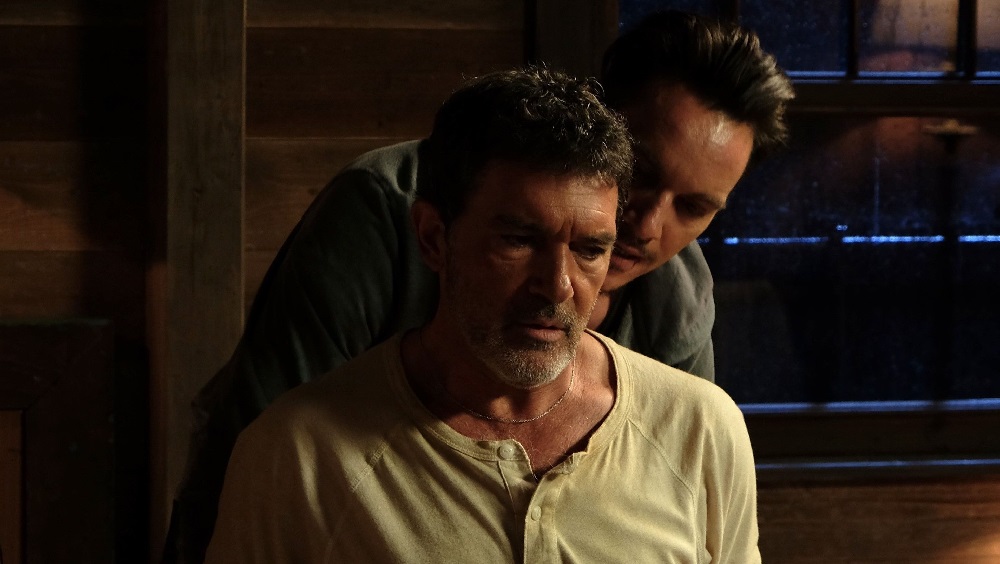 How much one enjoys director Brian Goodman’s (What Doesn’t Kill You) mind-bending thriller Black Butterfly, a remake of the 2008 twisted French suspense flick Papillon Noir, depends entirely on whether or not the film’s climactic reveal drives them up the wall in incredulous disbelief. It’s a twist loaded upon a twist, and while not altogether unexpected, it does pull the rug out from underneath everything that happened during the first two-thirds in a fundamental way. I’m not altogether certain that it works, the way it forces the viewer to question the ins and outs of the central mystery producing even more questions than it does answers. 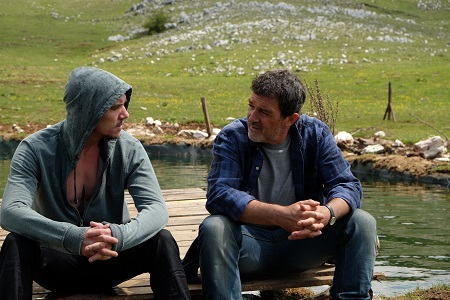 Writer Paul Lopez (Antonio Banderas) has journeyed to his mountainside cabin in order to craft the screenplay that will hopefully resurrect his career and solve all of his financial woes. While his small Colorado community has been rocked by a series of mysterious murders that have the local police flummoxed, the one-time literary wunderkind originally from Madrid isn’t worried. After all, who’d want to do anything to him? He’s broke, down on his luck and mired in a debilitating drunken depression that sets him at arm’s length from friend and stranger alike, even his eager and supportive real estate agent Laura (Piper Perabo) no longer sure what’s the best way to interact with him.

Enter Jack (Jonathan Rhys Meyers), a friendly drifter who lends assistance after Paul inadvertently angers a trucker during a confrontation at a roadside diner. In gratitude, the writer takes this stranger back to his secluded abode to clean up and to get a bite to eat, the pair striking up a grizzled, unforced camaraderie that catches the lonely men by surprise. Jack soon makes himself an essential part of Paul’s life, insinuating himself into the very fiber of it to an almost dangerous degree. As friendly as all this is, it really starts to feel like something sinister might be going on, the line separating them as individuals gradually disappearing the longer they remain under one roof.

Even for those unfamiliar with Papillon Noir, it will shock no one that nothing here is as it appears. Paul’s sanity sits upon a razor’s edge. Jack’s awe-shucks demeanor is nothing more than a façade concealing a disturbing level of menace and aggression. Laura’s kindness could very well lead to her undoing. Into it all, that little story about a killer stalking this Colorado community will also rear its terrifying head, the resolution to that particular mystery likely to land on Paul’s doorstep whether he wants it to or not.

Those are the basics, and for the most part they follow a typical pattern. But Marc Frydman and Justin Stanley’s script is frequently quite clever, especially in regards to how it goes about fleshing out both of its two main male protagonists. It oftentimes plays like an intriguing, continually unsettling variation on Ira Levin’s classic play Deathtrap or Stephen King’s iconic novel Misery, the screenwriters more interested in discovering who Paul and Jack are than dishing out a nonsensical series of thrills and chills just for the heck of it.

Even better is Goodman’s confident direction. He manages to manufacture a sense of mystery that oozes tension, while at the same time guiding Banderas, Meyers and Perabo to deliver complex, multifaceted performances that are continually intriguing. The filmmaker keeps things emotionally balanced throughout no matter how strange or structurally obtuse events might become, Goodman utilizing his outdoor locales, as well as production designer Michael Fissneider’s suitably cluttered interiors, with a dynamic precision that’s impressive. I was also taken with José David Montero’s (Open Grave) intensely refined cinematography, his images having a kinetic energy I was thoroughly mesmerized by. 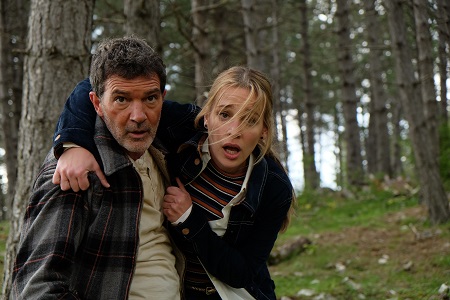 I still haven’t decided how big a problem the last third is. During these climactic sections, Frydman and Stanley’s screenplay loses some of its momentum, the narrative becoming so obsessed with its own hidden surprises it forgets to keep the action grounded in the various characters and the life and death decisions they’re all forced to make. It’s also here where Goodman relaxes his grip on things, delivering the final shocks with a level of gracelessness that felt moderately bludgeoning. While I didn’t feel these reveals came entirely out of a nonsensical world disconnected from all of the dramatics that came before them, that still didn’t make what transpired satisfying, the climax a curious turn of events that left me slightly frustrated.

But the positives as they pertain to Goodman’s sophomore opus far outweigh their negatives. While I wish the filmmakers had found a way to keep things more grounded, while I can’t help but feel they get too obsessed with trying to outdo the French original, the strong performances of the central trio and the emphasis on crafting strong, three-dimensional characters are positives I refuse to overlook. Goodman continues to impress from a directorial standpoint, Black Butterfly a strong, if still somewhat vexing, thriller I’m glad I took the time to watch. 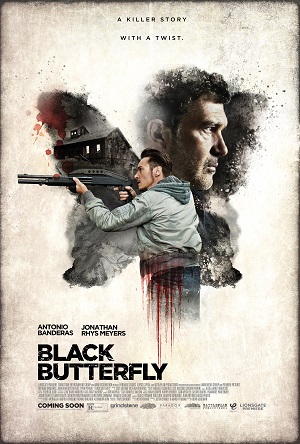