– “Up in the Frat House” Lyrics

Here’s what I wrote about Black Christmas back in December of 2019:

“There is nothing subtle about what director Sophia Takal (Always Shine) and co-writer April Wolfe have done with their rambunctious reimagining of Bob Clark’s 1974 horror classic Black Christmas. Unlike the 2006 remake (which is actually pretty good; I recommend checking it out), the filmmakers have kept the college campus setting and the sorority protagonists and then crafted an entirely new scenario. What they deliver is a fiercely feminine satire that eviscerates the patriarchal status quo while also taking to task the misogynistic man-babies who see a powerful woman as a threat to be destroyed and not an equal worthy of respect.

The students at Hawthorne College are heading home for the December break. Mu Kappa Epsilon sorority sisters Riley (Imogen Poots), Marty (Lily Donoghue), Kris (Aleyse Shannon) and Jesse (Brittany O’Grady) are sticking around, however, and they’ve planned an orphan’s dinner for a few of their friends who also are remaining on campus. But they’ve made enemies with the school’s top fraternity Delta Kappa Omega, and while it initially appeared the animosity between the two Greek houses had started to cool the four women manage to heat things back up with a talent show prank that quickly goes viral once it’s posted online.

From there things proceed somewhat as expected. All the ladies at Hawthorne who’ve stood up for their rights against male authority figures begin to receive ominous text messages claiming to be from the school’s long-deceased founder. Next, various sorority sisters who were supposed to be traveling home for the holiday’s ominously begin to disappear. Finally, Riley and her friends end up in a fight for their lives against a lethally terrifying masked menace, none of the quartet certain who it is that is attacking them or why they are so eager to end their lives in the most brutally sadistic ways imaginable.

It’s pretty straightforward, and at no point do Takal or Wolfe go to great of lengths to conceal what it is they are doing. This is a slasher where toxic masculinity is the culprit and there’s not all that much in the way of debate as to just how heinous that sort of vile imbecilic evil is. The pair do toss in a few semi-supernatural twists and turns for good measure, and not every guy is depicted as a massive ass-hat worthy of a swift kick to their privates. But that’s all window dressing as far as the bigger picture is concerned. Female empowerment is the game of the day, and watching these ladies take charge of their lives, their emotions, their bodies and their futures is as empowering as it is flat-out terrific.

There is a decided lack of scares, and other that a well-placed jump gag that left me visibly startled I can’t say I was ever on the edge of my seat in terror. It’s also incredibly obvious what is going on and who the culprit is, Takal showing her hand early on and I kind of wonder if I’d have felt more in the way of suspense had she and Wolfe not been so crystal clear about the nature of the threat stalking the feminist women of Hawthorne College. The director’s staging of a climactic melee also left a little something to be desired, the way it is frenetically shot and edited creating something of an obnoxious visual blur I found slightly frustrating.

Not that it matters. Poots is very good, delivering a far more subtly complicated performance than I anticipated. The Green Room and The Art of Self-Defense star makes Riley come alive in ways that are intimately haunting, the scars left by an unthinkable event from her recent past leaving the young woman an emotionally closed-off version of the vivacious outgoing person she used to be. Watching Poots rediscover an inner strength of will that will not only save herself but hopefully additional women as well is joyous in its energetic tenacity, this fiery explosion of self-empowered resilience so forceful I almost wanted to spring out of my theatre seat and cheer.

The rest of the cast is equally strong, especially Donoghue and Shannon, while O’Grady channels her inner Karen Smith as she steals scenes with her crack comedic timing and an ability to land a perceptive zinger so insightful her friends are forced to take note of it whether they want to or not. I also loved how lethal Takal is, the director taking zero prisoners as she shows how unchecked masculine puffed-up bravado can destroy all it touches even when women bend the knee and willingly allow themselves to be treated like helpless submissive sex dolls. A constant state of danger exists throughout the film and I always felt the possibility every character could meet a deadly end at the most unexpected moment, the cruel abruptness of a couple of the deaths tragically breaking my heart.

There will be a lot of whining and moaning about how purposefully political all of this is, most of it coming from the very type of disgruntled (and mostly male) nincompoops Takal and Wolfe go out of their way to satirically eviscerate. But this new Black Christmas is a heck of a lot more than a talented filmmaker beating a socially-conscious drum. Takal has manufactured a monstrously entertaining horror riff that intelligent audiences of all backgrounds, races and genders will hopefully find just as much fun to watch as I did, this merry little not-really-a-remake remake a gleefully malevolent horror gift I’m happy I took the time to unwrap.”

I still really like Sophia Takal’s down-and-dirty take on Black Christmas. It gets better for me with each viewing. More to the point, I have this sneaky suspicion this is the type of horror yarn that will grow in popularity and in esteem with the passage of time. The yowl of the man-babies will dim, and people will take a look at what Takal and writer April Wolfe accomplished with fresh eyes. That’s a day I happily look forward to.

Audio Commentary with director Sophia Takal and actress Imogen Poots
You Messed with the Wrong Sisters (2:53)
The (Re)Making of a Cult Classic (3:50)
Welcome to Mu Kappa Epsilon (1:50)
Deleted and Extended Scenes (5:47)
Alternate Ending (1:22)

Both a DVD and a Digital Copy of the film are included with this release.

I’m a Black Christmas 2019 fan-girl, and my enthusiasm for director Sophia Takal rambunctious remake has only grown with each viewing. Universal’s Blu-ray edition features a great audio commentary from the director and the film’s star Imogen Poots (where you’ll amusingly learn where just about all of the film’s penile sight gags can be found), while the technical specs are solid all the way around. This is a solid effort fans are almost certain to want to unwrap as soon as possible. 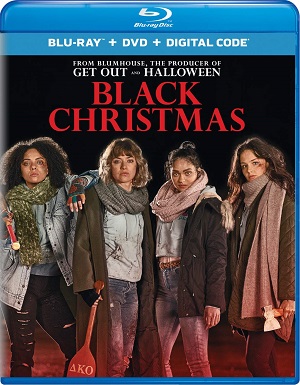