Speaking with her best friends Kayla (Geraldine Viswanathan) and Sam (Gideon Adlon) at lunch, Julie (Kathryn Newton) reveals she and her longtime boyfriend Austin (Graham Phillips) are planning to have sex on prom night. Not wanting to be left out, Kayla states she’s going to do the same. After a little thinking, and feeling a little accidental peer pressure, Sam also goes along with losing her virginity on prom night, even though she’s personally not certain the person she wants to be popping her cherry with is the guy that asked her to the big dance. 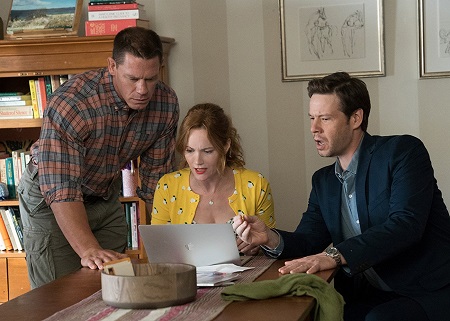 After the ladies leave for the evening in a limousine, Julie’s mother Lisa (Leslie Mann) inadvertently stumbles upon text messages between the three friends cleverly talking about their secret sex pact in colorful emoji code. Joined by Kayla’s overprotective father Mitchell (John Cena) and Sam’s estranged dad Hunter (Ike Barinholtz), she decides she is going to stop her daughter from losing her virginity. The three parents head into the night not really knowing what it is they are attempting to do, their only real goal to meet up with their children and hope that their advice, no matter how misguided it might be, will lead them to make the best choice possible.

What on the surface looked like some gender-flipped American Pie but with an intrusive parent twist, the new R-rated comedy Blockers proves to be a far more intelligently stupid thing than I thought it would be. While silly, while obviously spawned from a 1980s and ‘90s comedic mindset that gave the world favorites like Fast Times at Ridgemont High, Revenge of the Nerds, Weird Science and the aforementioned American Pie, there is still something sweetly genuine about this motion picture that caught me by surprise. There is a knowing warmth to it all, not only amongst the interactions of its teenage cast but between its adult members, too, and while no The Edge of Seventeen or Diary of a Teenage Girl this is still a knowing, wonderfully endearing character-driven romp I’m devilishly happy I took the time to see.

The directorial debut of Pitch Perfect writer Kay Cannon, where the film excels is in how deftly it balances its two competing storylines. The parents are just as important as the teenage girls are, each half of the tale running parallel to its sibling, everything tying together during the climax in a way that is charming, humorous and emotionally pure. Brian Kehoe and Jim Kehoe have written a script that’s shrewdly complex on a relationship level. Julie, Kayla and Sam are real friends, three people who have been there for one another through thick and thin practically from the first moment they stepped inside a kindergarten class. Yet they don’t tell one another everything. They still conceal facets of who they are and what they want out of life in fear of being judged. Rightly or wrongly, as open as they are with one another, some aspects of their personality still remain hidden, and it is the ability to look beyond the known and the unknown that truly makes this trio’s friendship unbreakable.

It’s not quite the same for the parents. Even though their kids are BFFs, they’ve spent the last decade-plus doing their best to remain strangers. At least that’s the case with Lisa, the single mother so wounded by past relationships she has difficulty forging friendships with others, especially men. While Mitchell would rather this wasn’t the case, this Type A personality still respects the boundaries his fellow parent has established for herself. More, both adults choose to distance themselves Hunter after his divorce from Sam’s mother is finalized, never taking the time to find out what happened between the two and instead think the worst about him even though each knows better.

Granted, it’s the parent stuff that is home to the best and the worst that the film has to offer. Some of the humor is just plain priceless. The banter between Mann, Cena and Barinholtz is strong throughout, each bringing their own sense of pace and timing, yet all three finding a way to make their differing styles mesh together in a consistently appealing manner. But it is their story where the most misbegotten and childish pieces of this comedic puzzle also fit together, and while some of the gross-out gags provoke their fair share of belly laughs, others are just too icky and too slavishly infantile to be anything but embarrassing. 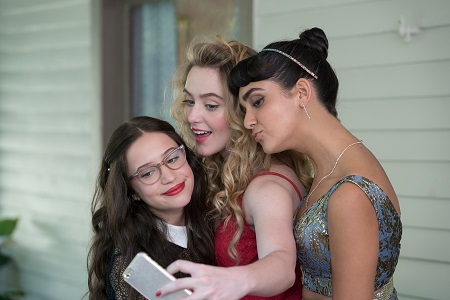 This stuff with the teenagers is also fairly wild, booze and drugs flowing freely as the three ladies throw off childhood with as much wild abandon that’s available to them. But Julie, Kayla and Sam’s prom night isn’t all about excess and debauchery. The real emphasis is on the young women’s friendship, their sisterly bond, and it’s the naturalism of their interactions that gives this story its heart. Cannon doesn’t sensationalize their actions, doesn’t try to transform any of the teens into some male fantasy only designed to focus their sexualized gaze upon. While the central thread revolves around the potential loss of virginity, the real point of this journey is all about fairness, equality, trust and honesty, the film ending up being all the stronger because of this.

Cena is a laugh riot, proving once again he’s force of comedic nature who also just happens to be a far more confident actor than I think he’s typically given credit for. Mann is also superb, and while Lisa isn’t too far removed from characters she’s portrayed in films like This is 40, The Other Woman or Vacation, that does not make her performance any less divine. As for the three young newcomers portraying the daughters, all of them are excellent, Viswanathan arguably standing out the most if only for a third act scene between her and Cena that noticeably tugged at my heartstrings. Blockers is a really funny motion picture. Better, it’s also an emotionally authentic one, that combination making this comedy something of a minor sensation I’m certain to be watching again soon. 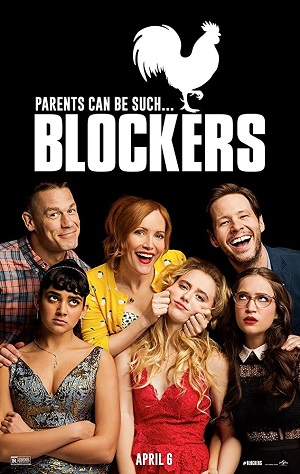