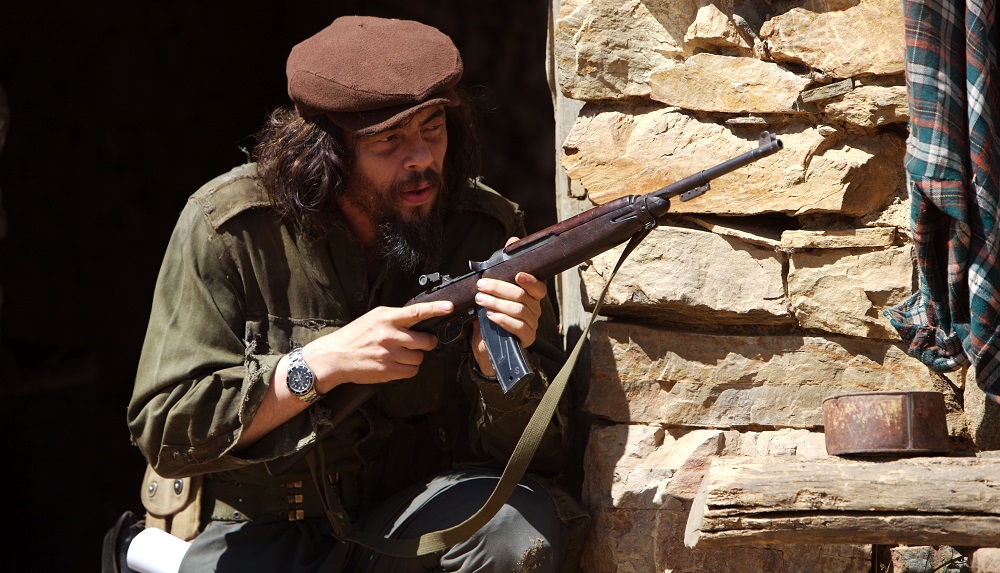 Che is technically two movies in one. Steven Soderbergh’s (Ocean’s 11, Traffic) 267-minute epic of the Latin American revolutionary is split into halves, the first covering Argentinean doctor Ernesto ‘Che’ Guevara’s (Benicio Del Toro) involvement in the Cuban Revolution working as Fidel Castro’s (Demián Bichir) friend, confidant and most trusted military colonel, the latter picking things up in 1965 as the renowned soldier secretly heads to Bolivia to try and duplicate his previous success.

Personally, I’m not sure what it would be like to watch Part One or Part Two disconnected from its familial partner. While I wouldn’t keep viewers from taking an intermission, it is almost vitally imperative Che is treated as the singular epic it rightfully is and was always meant to be. The two pieces feed one another, and the only way to fully embrace the shattering power of the climactic denouement is to go on the crazy blood-soaked journey start to finish.

This is a tough motion picture to talk about let alone dissect. Soderbergh and Del Toro have such passion for the project that, at times, it feels like they’ve spent so much effort on going over all of the most minute of details that they forgot to add the overarching insight that could allow the film to resonate on an even deeper level. I admit to knowing very little about Guevara. After watching this movie I’m not sure that has changed. The man remains a bizarre, erudite, driven, cold-blooded, deeply passionate enigma, and if beforehand I longed to be given insight into just what it was that drew so many to his cause that basic curiosity frustratingly still remains.

I’d be lying if I didn’t say this was a problem. With all the controversy surrounding Che, you’d think the filmmakers would have at least attempted to dive inside his skin and figure out what made him tick. One of the great things about Walter Salles’ The Motorcycle Diaries is that it showed Guevara as a man, that it gave the viewer insight to the events and moments that would shape him into the revolutionary figure he would later become. But that is not the case here, screenwriters Peter Buchman (Eragon) and Benjamin A. van der Veen only glossing the surface of the internal struggles residing within the heart of this iconic historical figure.

Yet, much like Warren Beatty’s Reds this is an epic that is more about the size and the scope of the prize the central figures are fighting for than it is the personal motivations that urged them on to try and claim it. This is a film about the furious forces that compel individuals to fight for what they believe in, about the charismatic figures that can convince others to take a stand whether or not the ideals they’re championing are everyone actually wants to embrace. To call Che fascinating would be a decided understatement. Even when it drags (and how can a four-plus hour movie not from time to time) it is still so enthralling it’s difficult not to get swept along with the guerilla armies tromping through the lush jungles of Cuba and South America. Alberto Iglesias’ (Volver) score is a kinetic triumph only fueling the film’s visceral fire, while Soderbergh’s cinematography, again working under the pseudonym Peter Andrews, is some of the best of his entire career.

As for the halves themselves, Part Two worked a little better for me than Part One did. It moved at a faster pace, its downward spiral into tragedy far more interesting than the hit-and-run sparring of the first chapter. Yet I can’t imagine the second half would have worked near as well without being set up so beautifully by the Cuban story, the seeds of Bolivian downfall only sprouting their destructive roots thanks to the shocking success of Guevara and Castro in their initial guerilla campaign.

I’m not entirely sure what to say about Del Toro. He is very good, his performance as realistic as any he has ever given. Even so, that aforementioned complaint about there not being enough insight into the character still holds, and as fine as the Oscar-winning actor is I still feel there’s something about the script holds him back and keeps Guevara from becoming as fully formed and as completely fleshed out as he definitely should have become.

Che is still a movie that cries to be seen in theaters. Soderbergh’s vision is as inventively magnetic as anything he has ever attempted (at least since his divisive remake of Solaris), and even with the overlapping narratives, the changing aspect ratios and the murky moralistic waters in which the story treks, to call it anything less than mesmerizing wouldn’t be the truth. It’s an epic film I think is only going to improve as time goes by, and as cinematic revolutions go this one ranks up there as one of the ambitious director’s crowning achievements. 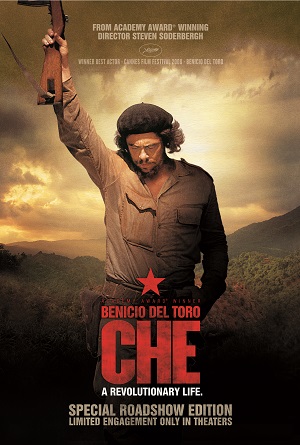