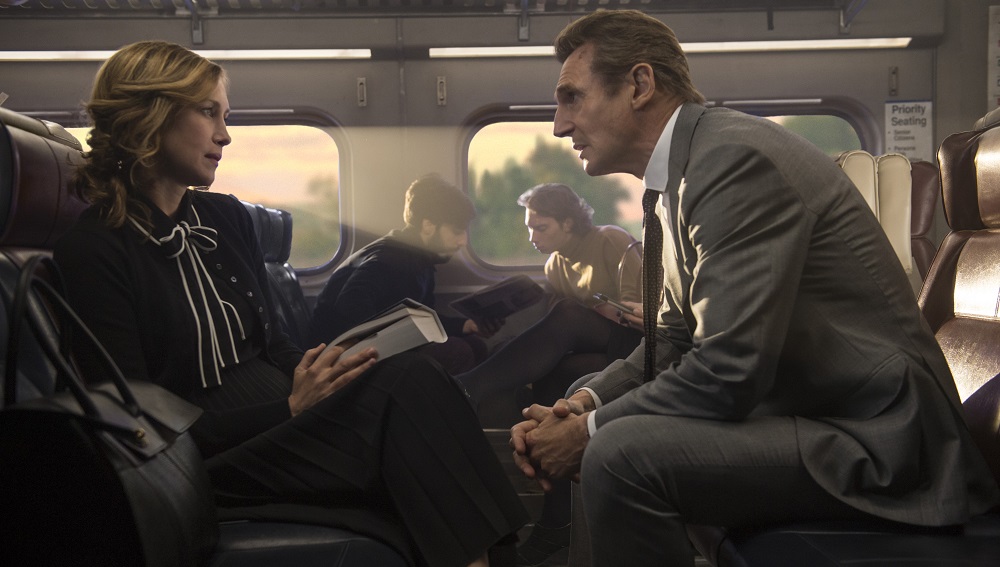 Michael MacCauley (Liam Neeson) has had better days. The former New York detective has been working as a successful insurance agent for the past decade, this job change allowing he and his realtor wife Karen (Elizabeth McGovern) get their family back on their feet after the housing and financial crisis of 2008 wiped them out. Just as things were looking up, with their son Danny (Dean-Charles Chapman) about to head off to college, out of the blue he’s given the sack, sent packing by his employer with him and his family’s health insurance covered for the next year as a severance package instead of a cash payout. 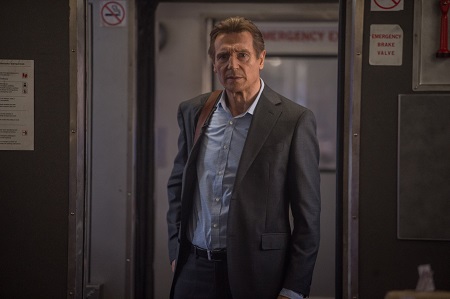 On the commuter train home, a trip he has taken every day, back and forth for the past decade, a mysterious woman calling herself Joanna (Vera Farmiga) sits down across from him and offers Michael a perplexing one-time job offer. She’ll pay him $100,000 if the ex-cop can figure out who on this train does not belong. They’ll be carrying a bag. They’ll be getting off at a certain stop near the end of the line. They go by the nickname “Prin.” That’s all the information Joanna offers, and while she’s willing to be generous to Michael, she’s also not going to let him turn her down, and she’ll threaten the lives of his wife and son if she has to in order to get him to do what it is she wants.

The Commuter is a silly B-grade action-thriller with Neeson giving an impassioned performance that, while not exactly all that far removed from his ones in Taken, Non-Stop or Unknown, is still delivered with more grit and gravitas than this inane little scenario deserves. Reuniting with Run All Night director Jaume Collet-Serra for the fourth time, the actor and the filmmaker have an obviously comfortable rapport. Together, they seem to know what works and what doesn’t, and as minor as this over-plotted piece of unabashed genre hokum might be, the whole things ends up being far more entertaining and fun to watch than it easily has any right to be.

Not to say this is some minor masterwork people will be falling all over themselves to heap praise on. This is the kind of movie that’s very easy to enjoy when you’re not paying a first-run ticket price. Seeing at a bargain matinee at a second run theatre? Heck yes. Watching it on Cable television while you’re folding laundry or doing any variety of mundane household chores? Absolutely. But it’s unlikely anyone going to an evening show during the first couple weeks of release will feel as if they got their money’s worth. It all so mercilessly harebrained and inadvertently humorous there were moments where I felt Neeson and Collet-Serra were making a parody of the sort of thrillers they’ve had such financial success with these past few years and not something I was supposed to treat with anything resembling seriousness, a bit of an obnoxious problem if I do say so myself.

Yet I admittedly had a pretty terrific time. Neeson owns characters like Michael, and watching him play off Farmiga in a pair of expertly staged one-on-one bookend scenes is a delicious treat. I also liked the way in which Byron Willinger, Philip de Blasi and Ryan Engle’s script works overtime to keep so many plot strands dangling and still find an amusingly unsophisticated way to tie them all together right at the very end. They take this Hitchcockian premise to its breaking point only to bolt right past it as things literally explode around Michael and the remaining commuters, in the process crafting the illusion that the audience has no idea what is going to happen next when in reality the answers are so blatantly obvious it’s almost as if they weren’t being concealed at all. 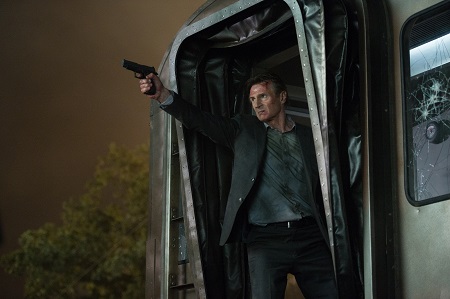 Collet-Serra has always been a technically proficient filmmaker, The Shallows a perfect example of him utilizing every single one of his skills with precision, confidence and tenacity. While not at the top of his game, he still handles himself admirably here. In fact, Collet-Serra stages one elongated bit of fisticuffs between Michael and a mysterious passenger inside an empty train carriage that’s extraordinary, if for no other reason than to wonder where the cuts are and when Neeson’s stuntman was inserted to do the things the actor wouldn’t be physically able to accomplish himself. He and editor Nicolas De Toth (Stoker) do a fine job creating tension while also maintaining a frenetic, if still pleasantly naturalistic, pace, the film’s 105-minutes flying by far more quickly than I imagined they were going to when I stepped inside the theatre. Also worthy of mention is Roque Baños’s (Evil Dead) invigorating score, and even if one major action sequence the music reminded me of Mark Mancina’s classic Speed theme, the composer’s compositions still manage to become their own character working inside the movie with the same tenacity and fervor Neeson is.

None of which is my way of saying that The Commuter is some sort of January marvel we’ll be talking about for the remainder of 2018. Be that as it may, Neeson and Collet-Serra know what they’re doing and they’ve got the formula down pat. For fans of the pair, there are certainly far worse ways to spend a couple of hours. If anything, the movie sure beats getting stuck in rush hour traffic on the way home from work. Make of that what you will. 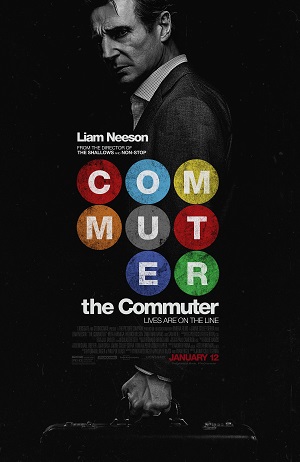