Inspired by the feature anthology films sprung from the minds of author Stephen King and the late horror icon George A. Romero, The Creeper returns with 12 new tales of terror in Season One of Shudder’s Creepshow.

From showrunner Greg Nicotero, season one of Shudder’s Creepshow is a deft and entertaining continuation of the horror anthology concept initially brought to memorable life by director George A. Romero (Night of the Living Dead) and author Stephen King (The Stand) back in 1982. It is a fun, silly, inventive and sometimes even scary descent into the creepy unknown, each short tale of terror attempting to tickle the funny bone while it also sends an unnerving chill right up the viewer’s spine.

Split up into six episodes with two distinctive stories each (with only the presence of The Creeper and a variety of clever Easter Eggs vaguely linking them together), season one is a rollercoaster ride of comic book horror thrills and chills that consistently manages to entertain even when some of the individual tales might come up a little bit short. They are directed by a variety of up and coming genre filmmakers and one bona fide horror heavyweight in the form of Maniac, Friday the 13th Part IV and Dawn of the Dead makeup artist Tom Savini, each of them having their own quirky idiosyncratic spin making them worthy of a look.

Episodes for season one include:

As stated, it’s a missed bag, but the ones that stand out do so rather stunningly in my opinion. I will say that my fav stories all can be found on the first disc and transpire over the first three episodes. Chief amongst these is “House of the Head.” This is a wildly original short featuring a sensational performance from Cailey Fleming as a smart and intuitive youngster who pulls out all the stops trying to save the lives of the Smith Smiths family living in her giant dollhouse when a strange, sinister disembodied head suddenly takes up residence.

The other two that I enjoyed the most were the goofily wacky comedic horror monster mash “The Finger” and the sinisterly sly morality play “The Man in the Suitcase.” Both of these had me grinning ear-to-ear when they concluded, and along with “House of the Head” they are the only stories I watched more than a single time.

Is this first season of Creepshow consistently great? No. I can’t say it is. Is it, however, consistently fun to watch? On that front I answer in a heart affirmative, and for horror fans having The Creeper back to introduce more tales of the supernatural macabre is an event worth celebrating.

These Blu-rays feature an English DTS-HD Master Audio 5.1 soundtrack. There are no subtitles.

This set is loaded with special features, all of which make the three-disc set worth the purchase price almost by themselves. Extras here include:

Like most horror anthologies, the first season of Creepshow is unsurprisingly hit-and-miss. But the hits, most notably the aforementioned “House of the Head,” “The Finger” and “The Man in the Suitcase,” are pretty terrific, while the misses are still just amusing enough to not get all that upset that they’re not nearly as strong as some of their counterparts are. This three-disc Blu-ray set is outstanding, and fans of the show are likely to be very happy if they decide to add this title to their personal libraries. 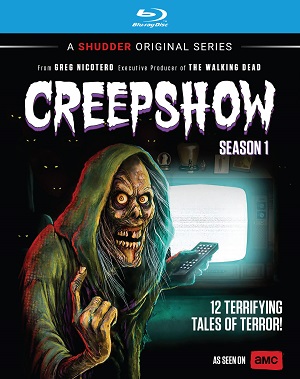