Not a lot happens in the prehistoric CG-animated adventure The Croods, but I’m not convinced a ton needed to. Filled with beautiful visuals, striking moments and sensational bits of comedy punctuated by honestly genuine spritzes of emotion, directors and co-writers Kirk De Micco (Space Chimps) and Chris Sanders (How to Train Your Dragon) have crafted a nicely self-contained travelogue that kept me entertained and the children sitting in the theatre wide-eyed in awe. It works, that’s it, the movie a wonderful reminder that if you tell your story well, with intelligence and with respect for the audience histrionic bells and whistles aren’t going to be necessary.

At its heart, the movie is a father-daughter tale revolving around teenager Eep Crood (voiced by Emma Stone). She loves her family, devoted father Grug (Nicolas Cage), loving mother Ugga (Catherine Keener), cantankerous grandma Gran (Cloris Leachman), clumsy kindhearted brother Thunk (Clark Duke) and spitfire baby sis Sandy (Randy Thom), but she’s starting to wonder if there’s more to life than running back to the cave every time anything dangerous or different happens. She wants to find something new, make her own path, and as much as she idolizes dear old dad the fact Grug is so insistent that imagination, inspiration and innovation are, not just bad, but dangerous, just doesn’t jive with how she’s starting to see the world.

Enter Guy (Ryan Reynolds). The svelte stranger has come across a sparkly, warmly inviting new invention he calls “fire,” and he’s using it to help him on his quest towards the Sun as he tries to outrace what he fears is the end of the world. Forced to flee their cave, Eep and the rest of her family uneasily join Guy on his journey, Grug none too happy that his little girl appears to be falling for the newcomer’s charms as well as starting to realize she’s old enough to think and act for herself and not have her selfless dad do it for her.

And that’s it. If you’re expecting the threat to be bigger, the assaults on the Crood family almost always from within the clan and how they view the outside world, than prepare for disappointment. It is how they relate to one another, how they have dealt with change, how they have run and hid from the world at large but now can no longer do so, those are the events central to the action, each member forced to look within and decide what changes work best for them if they are going to help themselves and their loved ones survive.

Grug like an ostrich, a man sticking his head in the sand refusing to admit time has passed him by and that the winds of change are blowing. At least, that’s how Eep initially sees things, and that’s a common perception for teenagers as it relates to their parents. As such, De Micco or Sanders don’t have much that’s original to add to the conversation. They follow a template that’s existed since movies began looking at how teenage sons and daughters perceive their parents, the only difference here being the prehistoric setting and the stunning animation.

But when the writing is this sharp, the byplay between parent and child so winning, incisive and, most importantly, honest, it’s hard to get too persnickety in regards to how rudimentary this prehistoric road trip turns out to be. I liked Eep. I liked Grug. I liked the way they interacted to the other members of their family. I liked the way they initially viewed Guy and how their interpretations of him changed over time. I felt like I felt like I could relate to what they were going through, this feeling of communal affinity making their emotional trek connect with joyous intimacy.

Once again DreamWorks has hired the great Roger Deakins (Skyfall, True Grit) to be a visual consultant on the film, and as with How to Train Your Dragon and Rise of the Guardians his presence is definitely felt. There are moments of visual magnificence that boggle the mind, and the way the movie plays with shadow and light is extraordinary. There is an elegance to the imagery that is stunning, the technical wizardry of the animators merging with the directorial confidence of the two filmmakers in a way I found wholly irresistible.

In some ways The Croods does remind me of Pixar’s Brave, both movies putting their strong-willed female protagonists front and center and are content to tell a straight-forward story free of indulgent embellishments. But as nice as that film was, and I did enjoy that Academy Award-winner quite a bit, this one to me feels like a richer, more satisfying overall experience. While nothing unexpected happens, while there weren’t any surprises, the comfort I felt in seeing this family break new ground while coming closer together as a unit still put a smile on my face, and as such this ended up being a sojourn into the fantastically prehistoric I kind of adored. 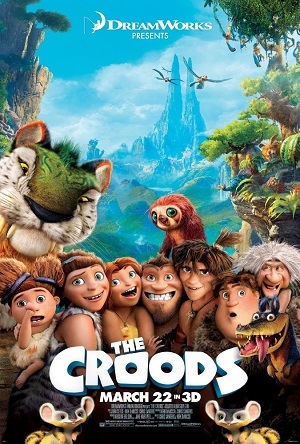