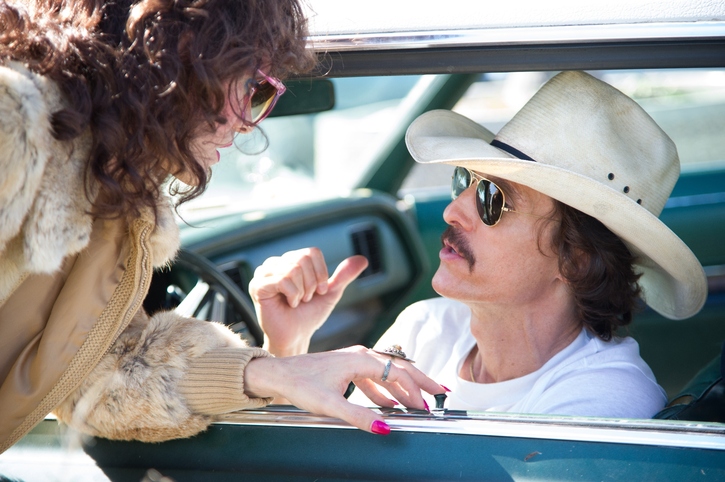 Texas electrician Ron Woodroof (Matthew McConaughey) has been given 30 days to live. Outspokenly homophobic, an unapologetic lothario to the nth degree, he’s just been diagnosed with having full blown AIDS and, considering this is 1985, that’s as gigantic a death sentence as any he ever could have been handed. 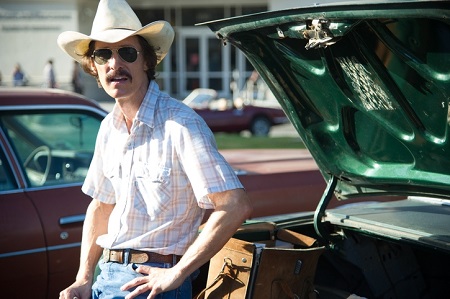 But Woodroof is not the kind of guy that goes quietly into the good night. Without his doctor Eve Saks’ (Jennifer Garner) consent, teaming up with the most unlikely of allies, transsexual HIV patient Rayon (Jared Leto), this outspoken, go-for-broke cowboy begins to research ways he can survive. More than that, he discovers a way to import drugs not cleared for use by the FDA but have shown great promise in treating those battling the disease. Suddenly, Ron isn’t just prolonging his own life, but also giving hope to those who previously had lost it, going against authority and powerful business interests in order to do the right thing. And, hey, if he manages to make a few bucks in the process, well that’s just fine, too.

The great thing about Dallas Buyers Club is how unapologetically it treats its characters. Not just Ron Woodroof, a man the movie makes no bones about depicting as a bigoted narcissist only interested in serving his own basest desires, but also those who end up filling his inner circle, including Rayon and Dr. Saks. This isn’t a movie interested in showcasing people as whitewashed saints striving to serve the greater good, and while their actions end up doing just that very thing the fact they are so inherently flawed is what ends up making them heroic.

Director Jean-Marc Vallée (The Young Victoria), working from a dynamic, intelligently layered script by Craig Borten and Melisa Wallack (Mirror Mirror), presents things with forceful, free-flowing intensity yet never piles on the melodramatic bombast. More, he infuses the proceedings with humor and warmth, finding the inherent absurdities in what it is Woodroof and Rayon are doing while at the same time never sugarcoating the effects they are having on both their own lives as well as those who come into contact with them.

If anything, the movie plays like a perfect companion piece to last year’s Oscar-nominated documentary How to Survive a Plague. Like David France’s astonishing film, Vallée’s motion picture looks at the early days of the AIDS crisis with an exacting lens, showing how average people of all stripes took action in a battle those in power and who claimed they were in the know appeared indifferent in regards to battling. He lets Woodroof and Rayon speak, doesn’t sugarcoat who they are or belittle the war they find themselves in the middle of. He lets history intermingle with actuality, puts people at the center of a whirlwind that would infect the entire world with its poison, allowing the emotional realities of these events to hit home with a concentrated naturalism that’s both raw and instinctual.

There are startling scenes and sequences throughout, including outstanding bits between Woodroof and his former coworkers at a neighborhood bar and another spotlighting his and Rayon’s first encounter at the hospital. The exactitude of the script is also noteworthy, the writers digging into so many different areas of intrigue and interest with fine attention for detail yet never lingering so long on any one item dramatic intensity might start to wane. Borten and Wallack do a grand job of balancing the central personalities while also staying true to their overall histories, rarely stopping for any sort of sermonizing on the parts of a principal or a secondary character in order to spell things out for the viewer in more direct terms.

McConaughey, who has already had a fine 2013 if we only had Mud to talk about, builds on the goodwill generated by recent efforts to deliver a performance that’s as nuanced as it is unsentimental. The actor never sugarcoats who Ron Woodroof is or the base egotistic self-serving desires that initially drive him. He doesn’t attempt to make him likeable, isn’t interested in softening his harder edges, realizing that by presenting him as-is, without sentimentalizing his actions (let alone over-explaining them), he ends up making everything he accomplishes all the more incredible. It’s a stunning, engagingly multifaceted performance, devoid of pretense and oozing authenticity, even his more abhorrent actions and tendencies kind of beguiling when the big picture is taken in full.

The real story might just be Leto. Always a bit of an underrated actor (see Requiem for a Dream and Prefontaine), the guy is far more than just a frontman for 30 Seconds to Mars, and he throws it all on the line to prove it. As awesome a physical transformation as anything I’ve seen in ages, his work digs way beneath the surface becoming a startlingly real examination of a life in transition under assault from seemingly every corner. He broke my heart, took me to the edge of infuriation and captured my imagination, oftentimes all at once, Leto fashioning an indelible transgender portrait as vibrant and as authentic as any to ever hit the screen in a mainstream cinematic drama. 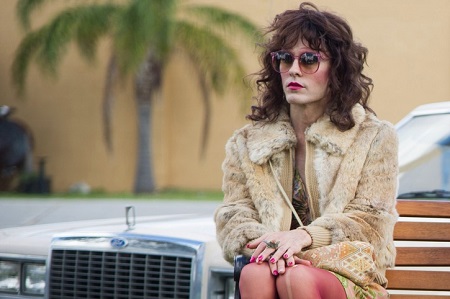 Vallée juggles all of the movie’s various aspects with ease, even Garner’s relatively cliché presence (she mainly exists to explain much of what’s going on and keep things on a moralistic even keel) feeling more genuine and authentic than it potentially could have. In lesser hands, this movie easily could have devolved into didactic bombast, hitting audiences in the head with its themes. But Vallée refuses to let that happen, engaging emotional investment straightaway by just allowing events to happen with naturalistic grace and not with preordained artifice. It’s elegantly directed, living and breathing on its own without any undo falsities, making the last sequences sparkle with an electric verity I wholly responded to.

There’s been a ton of buzz building for Dallas Buyers Club. Its Oscar prospects are off the charts, especially as far as McConaughey and Leto are concerned. This is one of those rare instances where I feel like this is one of those movies that, do not just live up to the hype, but also exceed it, making Vallée’s based-on-fact stunner one of the best films I’ll watch this, or in any other, year. 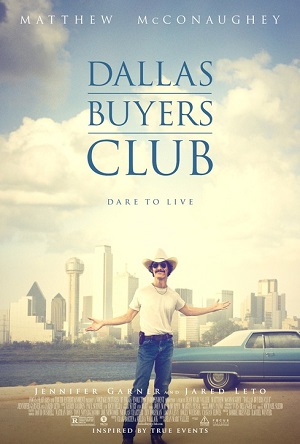