Jake Chambers (Tom Taylor) is having visions. He’s having nightmares of teenage children in pain. Of oddly misshapen adults hiding their rodent-like features behind clumsily stitched together human skins. Of a man, a fearsome man, a loathsome man, a Man in Black (Matthew McConaughey) with terrifying powers over life and death whose minions grovel at his feet. Jake also dreams of a different man, a Gunslinger going by the name Roland Deschain (Idris Elba), a powerful warrior who appears to fight for the forces of light and goodness against those who would see darkness and evil reign supreme. 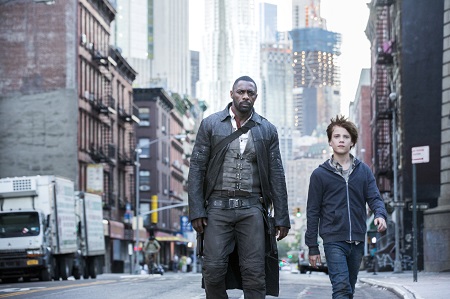 Most of all, Jake sees a spire rising like a needle pointing to Heaven, a Dark Tower, a massive structure at the center of what appears to be the Universe itself, the Man in Black apparently intent to see it crumble while Roland and his ilk do all they can to ensure this cataclysmic event does not come to pass. Now, roaming the streets of New York City, this young teenage boy finds he is the key in a battle between good and evil that has been raging for centuries. Traveling across dimensions, he must find the Gunslinger, because only with their combined abilities can the Dark Tower be saved and the Man and Black finally destroyed.

Fans of Stephen King’s seven-volume The Dark Tower series have been waiting for some time for a movie adaptation, the story of the ongoing battle between Roland and the Man in Black a hybrid of Western, Fantasy and Horror storytelling that is as imaginative as it is unique. But these stories have proven to be a tough nut to crack, Apollo 13 and Willow hit-maker Ron Howard the primary driving force spearheading multiple attempts to see a film made. With his plans to have a movie precursor launch into a “Game of Thrones” type Cable television series potentially on hold (although accounts there are somewhat contradictory), the filmmaker tasked talented Danish filmmaker Nikolaj Arcel (A Royal Affair) with the handling of the first half of that equation. Sadly, the result of all this anguish and effort appears to have gone for not, this initial foray into King’s supernatural world hardly worth the wait.

Featuring a script written by Arcel, Akiva Goldsman (A Beautiful Mind), Jeff Pinker (The 5th Wave) and Anders Thomas Jensen (The Salvation), this movie feels as if all involved were responsible for crafting a handful of ten minutes scenes that they’d all figure out how to combine into a cohesive narrative whole at a later date. They throw varying plot strands at a wall hoping they will stick together, each of them potentially interesting in and of themselves but when connected together prove to be a stupefying nonsensical mishmash of frustrating conflicted ideas that are never fully realized. Not so much a disaster as a waste of inherently intriguing potential, this take on The Dark Tower isn’t going to win over a lot in the way of fans, and as such I can’t help but think we’re not going to be seeing further battles between Roland and the Man in Black anytime soon.

It all admittedly looks terrific. The movie is gorgeously shot by Rasmus Videbæk (The Shooter) and magnificently realized by production designers Christopher Glass (The Jungle Book) and Oliver Scholl (Suicide Squad). More importantly, Arcel shows a knack for crafting action sequences, a couple of set pieces overflowing in a palpable sense of energy and excitement that’s invigorating. The director has also cast his two main roles perfectly, McConaughey having a grand time personifying evil incarnate as he slinks his way through the varying worlds the Man in Black is attempting to destroy. Elba is even better as the weary Roland, his Gunslinger a revenge-seeking knight who slowly finds his faith in his mission restored once he crosses paths with Jake.

But there’s no point to any of this, and instead of playing like a tale sprung from the mind of one of horror’s most revered and respected authors, most of it comes across like a turgid, unfocused rehash of The NeverEnding Story than it does anything else. But instead of a young New Yorker battling the Nothing to save the mystical land of Fantasia, here the only nothing at play is the total lack of anything substantive. There’s no cohesion, no rationale why one event that transpires leads to the one directly following it. It’s a big, monstrous waste of time, energy, resources and talent, The Dark Tower a forgettable misfire that does injustice to King’s source material and sadly belongs in the bargain bin collecting dust. 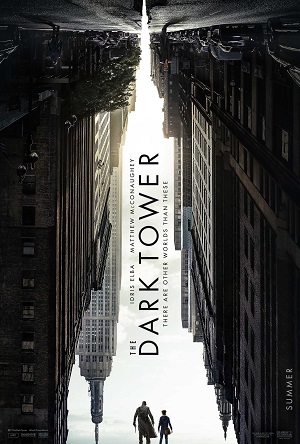