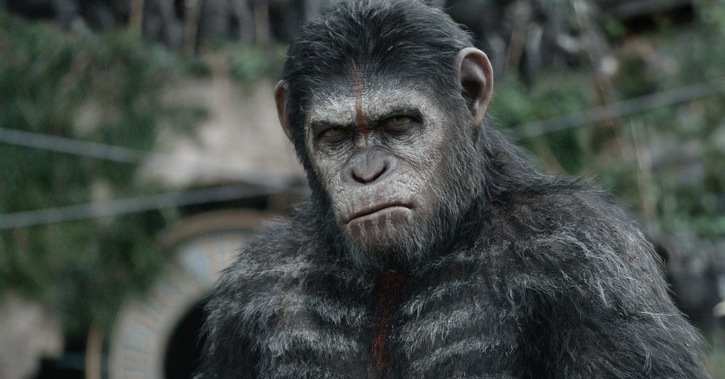 Somber Dawn a Rousing Continuation of the Apes Saga

Caesar (Andy Serkis) believes peace has finally come to the forest. It’s been a decade since he led the ape revolt, the genetically evolved primate helping his brothers and sisters secure their freedom from a San Francisco research tower making a home in wild, overgrown environs just outside the city limits.

But at what cost? Their flight to freedom inadvertently started the spread of what commonly became known as the Simian Flu, a devastating plague that wiped out the majority of humanity all across the globe. It’s been two years since Caesar or any of his clan has seen a human, the wise leader, husband and father to two sons, one a newly born infant, starting to wonder if the entire species has been rendered extinct leaving apes to rule what’s left of the planet.

No such luck. Malcolm (Jason Clarke) and his small group, including his son Alexander (Kodi Smit-McPhee) and girlfriend Ellie (Keri Russell), herself a former CDC medic, have ventured into the forests just outside of San Francisco hoping to see if the dam that used to supply the city with power can be made operational once again. Initially, the meeting between ape and human does not go well, leading to Caesar to lay down a stern warning that to return to their land could have dire consequences for every person residing in the now-ruined coastal metropolis.

If this was all Dawn of the Planet of the Apes had on its mind, chances are it could potentially be a fine, if utterly disposable, big budget major Hollywood studio special effects-laded action spectacular. More than that, it would be a movie that arguably would fit in with any of the four sequels made to the original 1968 version of Planet of the Apes, not so much bad as just a noticeable, if somewhat creative, step down from the film that spawned it.

But this particular sequel, directed by Matt Reeves (Cloverfield, Let Me In), isn’t content to just pick up where Rise of the Planet of the Apes left off and be nothing more than a nicely paced and energetically staged retread. No, not this movie, it actually wants to change the game, wants to be something more than just another ‘talking ape’ movie. Reeves and company are interested in, not just expanding and deepening the mythology, using both Pierre Boulle’s celebrated novel as well as the original film for inspiration on that front, but also adding a primal, almost primordial quality to the proceedings bordering on spectacular.

The opening act is stunning. Virtually silent, Caesar and his apes communicating in a series of shrieks, grunts and sign language, engaging in an expertly choreographed hunt for food that unexpectedly devolves into a frenetic fight for survival. It’s as if Reeves has combined elements of 2001: A Space Odyssey, Quest for Fire and an episode of PBS’ long-running “Nature” in order to set his stage with profound, almost timeless elegance.

But then he and returning writers Rick Jaffa and Amanda Silver, with a healthy assist from The Wolverine and Unstoppable scribe Mark Bomback, change the game even more, eschewing simple black and white tropes in order to stroll confidently in shades of grey that are deep, complicated and devoid of anything approaching remorse. The opening hour is a delicate give and take between Caesar and Malcolm, the repercussions of their growing friendship not anything either of them ever could have predicted. Seeds of trust are sown while leaves of discord slowly begin to fall to the ground with cacophonous subtly. The underlying social commentary here is undeniable, Reeves orchestrating it all with a masterful eloquence making the world and its tragically, virtually preordained devolution into unmerciful violence all the more heartbreaking.

By the time things do hit the fan, while the outcome isn’t surprising the weight and the significance Reeves gives to it in some ways is. There is a remarkable daring to how he allows things to come to a conclusion, sending things out on a magnificent one shot on a pair of pained yet steely, uncompromising eyes making for an almost perfect bookend to a similar image that opens the picture. Considering the magnitude of the crisis (not to mention the body count) this is a dour, undeniably heady way to orchestrate the denouement, an ambiance of uncomforting melancholy producing shudders that would not dissipate long after the closing credits had finished their run.

For those that felt Serkis was due recognition for his work as Gollum in The Lord of the Rings trilogy, for everyone who thought he was robbed a Supporting Actor nod for his take on Caesar in Rise of the Planet of the Apes, get ready to have those frustrations fueled to their absolute boiling over point for a third time. The unquestioned lead, the focal point around which the entire film revolves around, his performance is stratospheric, so emotionally dense and internally nuanced calling him masterful is a massive understatement. This isn’t animation, this is inspiration, and to say Serkis isn’t doing revelatory work is, to me at least, something way beyond the proverbial pale.

But he’s not the only one. With him as their guide, Toby Kebbell, as Caesar’s violent, human-hating second-in-command Koba, and Nick Thurston, as his pubescent upstart eldest boy Blue Eyes, turn in astonishing performances, mining unexpected terrain in ways that consistently surprise. They do not sit back, do not take it easy, investing fully in their roles giving themselves completely to the material. The journeys they take are remarkable in their honesty and authenticity, and while where each of them ends up is hardly shocking how they get there is a continual marvel all the same.

As far as the non-ape characters are concerned, the actors all do their best but, it almost goes without saying, the movie isn’t anywhere near as interested in them as it is in their far more hairy costars. Still, Clarke is excellent, sharing a handful of poignant scenes with both Serkis and Gary Oldman, playing the withered, beaten down yet refusing to give up leader of the human survivors Dreyfus, all of which are worthy of note. But the script gives their side of the tale far less of its focus allowing them to be a bit more nondescript than their simian counterparts, many of the humans devolving into tropes and stereotypes often enough to the point it’s moderately annoying.

Not that it matters. Dawn of the Planet of the Apes is a better film than its predecessor in almost every way, and, somewhat shockingly, comes amazingly close to equaling the brilliance of the original 1968 Charlton Heston favorite that started it all. The director takes his game to entirely different level, and as terrific as his previous two efforts were – and they’re both excellent – this stands so far above them even mentioning the films in the same breath as this feels like a minor disservice to both him and to the feature he has gloriously constructed. There’s nothing dirty about his accomplishment, and if this new take on the Planet of the Apes saga is going to continue I damn sure hope Reeves continues to play a part in bringing it all to life. 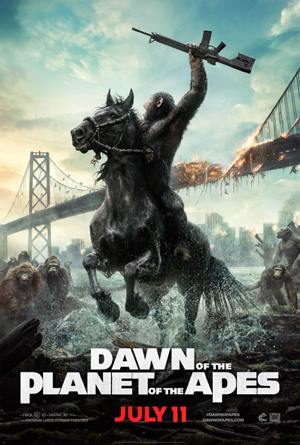