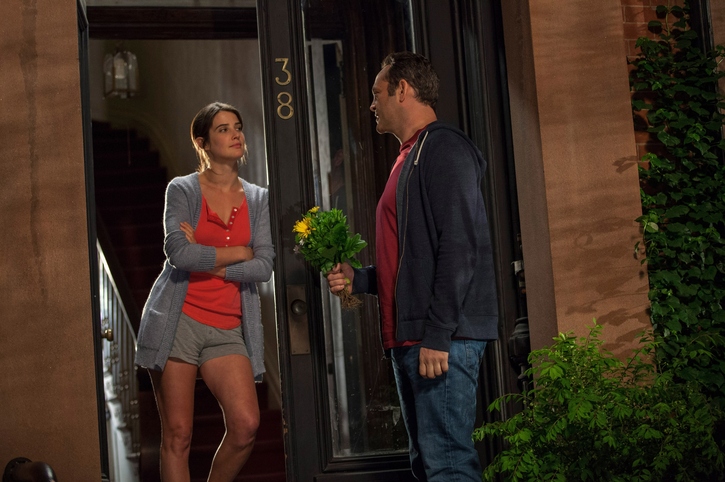 Man-child David Wozniak (Vince Vaughn) has just learned he’s got over 500 children thanks to a snafu at the sperm bank he used to make deposits at while in college. He’s suddenly got one heck of a lot of explaining to do, especially to girlfriend Emma (Cobie Smulders).

“David Wozniak (Vince Vaughn) is being sued. The New York delivery truck driver for his family-owned meat packing company, he’s an eternal bachelor barely making ends meet and not exactly ready to jump into commitment and responsibility when longtime girlfriend Emma (Cobie Smulders) announces she’s pregnant. He hardly has three pennies to his name and nothing of value in his possession, so the fact he’s the subject of a law suit is admittedly bizarre.

Turns out, 20 years prior Dave made a lot, tens of thousands of dollars of a lot, of donations at an affluent sperm bank, and through a rather unusual set of circumstances turns out he’s the biological father of 533 children, 142 of them wanting to know his identity. They’ve put forth a lawsuit to override the confidentiality agreement, attempting to set a unique precedent that could have repercussions going well beyond the mild-mannered delivery man’s personal life. Then again, against the advice of lawyer and best friend Brett (Chris Pratt), Dave has started to learn the identities of some of his offspring, secretly checking in on their lives discovering a lot about himself and the man who aspires to be in the process.

Adapting his own French-Canadian import Starbuck, writer/director Ken Scott’s Delivery Man has the exact same problems and issues its predecessor had, dripping in sentimentality and straining credulity at virtually every turn. At the same time, it also has many of the same strengths, featuring a number of laugh-out-loud moments and scenes of startlingly effective tenderness that can’t help but bring a tear to the eye. It’s a wildly mixed bag some of it awesome, much of it reasonably okay while a large section is obnoxiously overbearing in its schmaltzy corniness.

For my part, I can’t say I’d ever want to watch the movie again. Granted, even though I didn’t mind Starbuck all that much it moved me so little I never felt compelled to actually write a review for it when it opened domestically earlier this year. By and large, that’s exactly how it is with this remake. Delivery Man isn’t terrible, far from it, it’s just not particularly memorable – at least not for the right reasons – and as nice as many of the positives are they’re just not extraordinary enough to warrant deep and meaningful contemplation.

I will say that for Vaughn this movie is a sterling reminder that he can be a much better actor than oftentimes given credit for. Dropping his usual shtick (more or less), he brings an authentic transparency to Dave that’s moderately endearing, and even when Scott’s script goes off the deep end into a mawkish ineptitude (one of his kids is dealing with addiction issues, how she overcomes them borders on being infuriatingly clueless) somehow the actor keeps things emotionally grounded and dramatically centered. This is close to a great performance, at the very least it’s a surprisingly strong one, and I appreciate how willing Vaughn was to go outside his comfort zone in order to stay true to the film’s Capra-esque themes and ideals.

But, sadly, I just don’t have a lot more to say. Scott’s film is instantly forgettable, and while the premise is certainly unique I just don’t feel like he’s done enough with it (either version) to make it something worthy of debate or discussion. Nothing that happens is unexpected, no turn unforeseen, and the fact the director wastes every single one of his female cast members planting them in nothing roles (especially Smulders) is borderline inexcusable. Vaughn’s performance and a handful of pleasing moments notwithstanding, Deliver Man doesn’t bring forth a cinematic package worthy of getting excited about, let alone heading out to the theatre and buying a ticket to see.”

It took me three viewings to watch Delivery Man the second time, not because I found the attempt a execrable experience but more because I kept falling asleep. That says it all, right?

Not a lot to talk about here, the almost 20 minutes ‘Building Family’ featurette probably the most interesting extra but even it barely rises above its EPK-style roots. Vince Vaughn adlibbing like made in his little extra is amusing, but at five minutes it, like most of his off-the-cuff stream-of-consciousness comedy, goes on way too long. As for the rest? Not a lot to say. Actually, there’s nothing to say at all.

Delivery Man isn’t so much terrible as it is instantly forgettable. Disney’s Blu-ray presentation is nice enough, and I appreciate Vaughn performance and his attempts to dig a little deeper than he has in past roles, but overall this movie doesn’t do a lot for me. Rent it for yourself and you’ll see what I mean. 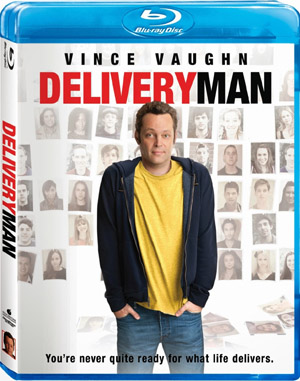