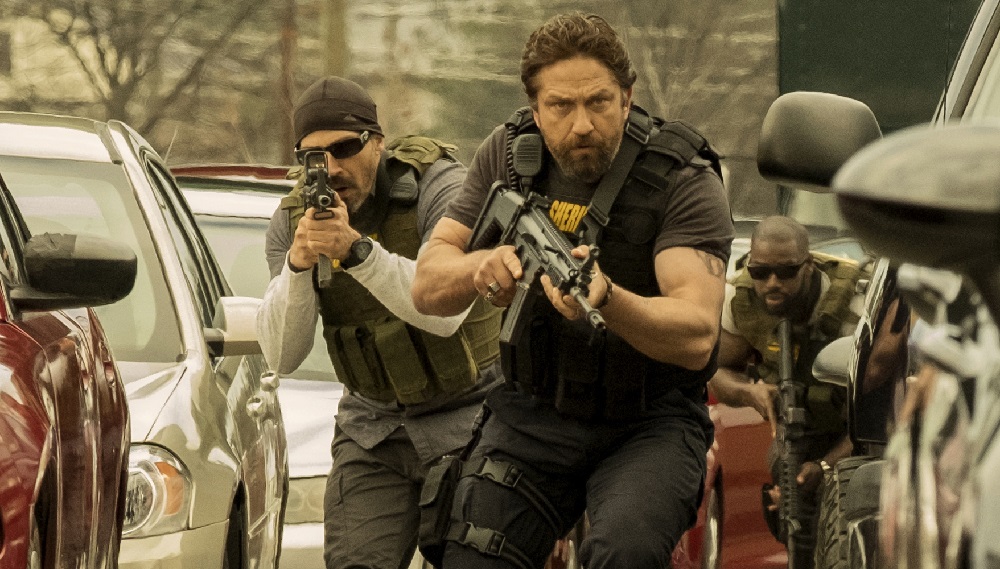 Detective “Big” Nick O’Brien (Gerard Butler) runs the Major Crimes Unit of the Los Angeles Sheriff’s Department. He’s aggressive, belligerent, violent and could care less if he or his men burn a few bridges as they go about bringing down career criminal crews while they’re in the middle of their latest high-profile robbery. Even though he’s a drunk and his home life is a bona fide mess, Big Nick likes to think he’s a good cop, all of his efforts going into doing his job instead of being a better husband or father.

Former Marine Ray Merriman (Pablo Schreiber) is one of the best thieves in the business. He runs the tightest crew in L.A., his group responsible for some of the most profitable, and still unsolved, bank robberies and heists the city has ever seen. Now, with the help of getaway driver Donnie Wilson (O’Shea Jackson Jr.), a newcomer to his team who makes an immediate impression, Merriman is planning his coup de grace. He and his men are going to steal millions right out from under the nose of the U.S. Federal Reserve. Even better, he’s going to do it in a way that all but guarantees the government won’t even realize they’ve been robbed.

Following in the footsteps of Michael Mann’s 1995 classic Heat (not to mention coming quick on the heels of John Hillcoat’s Triple 9 released last February), director Christian Gudegast, the screenwriter behind London has Fallen and A Man Apart making his directorial debut, attempts to revitalize the cops and robbers melodrama with the testosterone-filled action-thriller Den of Thieves. Featuring a solid cast of grizzled character actors (which includes the likes of Curtis “50 Cent” Jackson, Evan Jones, Jordan Bridges, Mo McRae and Brian Van Holt), the movie certainly looks authentic, and as such the filmmaker is able to craft an aura imminent violence that’s decidedly palpable for every second of his film’s epic 140-minute running time.

Pity it’s all so unrelentingly dumb, cliché and devoid of a single new idea. Gudegast and co-writer Paul Scheuring’s (The Experiment) script is a giant mess that creates archetypes instead of complex three-dimensional characters, more concerned with coming up with unforeseen twists and turns that will hopefully spin this overly familiar scenario on its head than it is in grounding things in anything even slightly plausible. Big Nick and his team do things that would, not just get them fired, but would likely put them in jail alongside the criminals they’re chasing. Merriman is billed a criminal genius yet he never makes the obvious move to eliminate the one major obstacle that could lead to him getting caught or killed.

It doesn’t matter that Butler and Schreiber play their respective characters with conviction and strength. It doesn’t matter that a handful of individual moments lead to a smidgen of insight that makes these men far more interesting than they eventually turn out to be. It doesn’t matter that Gudegast stages his action scenes with an eye for detail, the level of intensity he engineers for a climactic shootout and during the actual Federal Reserve heist itself both undeniably exciting. None of that matters because the movie is so brain dead, so filled with bad ideas and lame plot devices, that maintaining interest in what is going on and why, let alone caring about who is going to survive until the end, is practically impossible.

There is one exception, and thankfully it is a major one. Jackson, so terrific in Straight Outta Compton and amusingly memorable in Ingrid Goes West, is fantastic, adding a layer of mischievous gravitas to his portrayal of Donnie that’s enthralling. It isn’t even a question that he’s the film’s most interesting character, this man far more than he appears to be, and as such there’s a constant sense that there is more going on behind his eyes and inside his head than initially meets the eye. Jackson registers these nuances with ease, and almost all on his own he made me enjoy what was going on far more than I otherwise would have.

Make no mistake, there is amusement to be found in watching Butler do his best over-the-top Al Pacino impersonation, the action veteran having so much fun wallowing around in the muck and mire of Gudegast and Scheuring’s screenplay it’s hard not to enjoy what he’s doing. The film’s sound design is also extraordinary, while Cliff Martinez’s (Only God Forgives, Drive) suitably visceral score adds an atmosphere of edgy uncertainty I couldn’t resist. Finally, I really did love the actual heist, and while the sequence doesn’t compare to the one in Rififi, there are at least elements of it that do deserve to be mentioned in the same breath as that 1955 classic.

Unfortunately, none of these items I found pleasing or that I felt worked about the movie mean I think anyone should rush out to a theatre to see it. Den of Thieves is way too derivative of similar motion pictures (most notably the aforementioned Heat) and features a script that continually presents the majority of its characters as short-tempered nincompoops who could barely plan a birthday party our catch the common cold let alone plan the heist of the Federal Reserve or capture hardened criminals in the act of participating in a heinous crime. There’s fun to be had, that’s a certainty, just not enough of it to make Gudegast’s flashy debut anything more than a moderately intriguing, yet still instantly forgettable, ill-plotted curiosity. 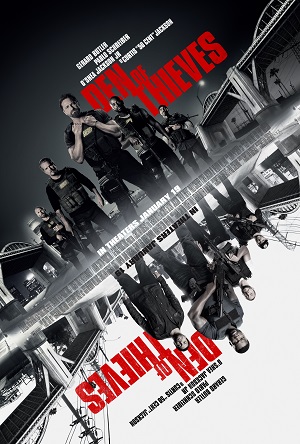