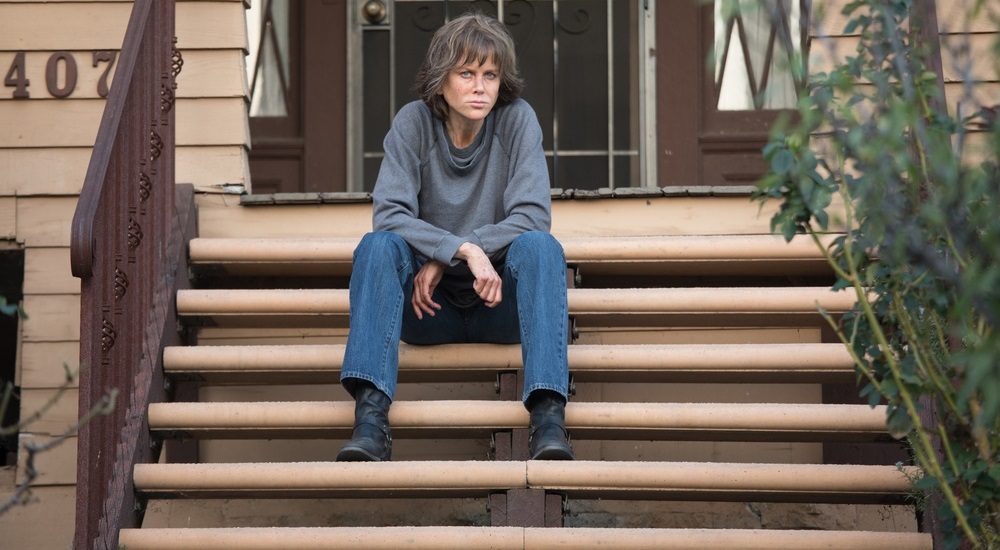 Veteran LAPD Detective Erin Bell (Nicole Kidman) is a living catastrophe. She drinks too much, barely sleeps, has an argue-first-and-ask-for-forgiveness-later relationship with ex-boyfriend Ethan (Scoot McNairy) and is angrily estranged from her troubled 16-year-old daughter Shelby (Jade Pettyjohn). But she’s also very good at her job, and when an old enemy from her past, notorious bank robber and cop killer Silas (Toby Kebbell), mysteriously resurfaces, Erin puts everything else aside in order to apprehend him. The detective looks at this task as a way to redeem herself for past sins, thinking that if she can bring him to justice the ghosts that haunt her will finally be satiated and vanish into the ether. 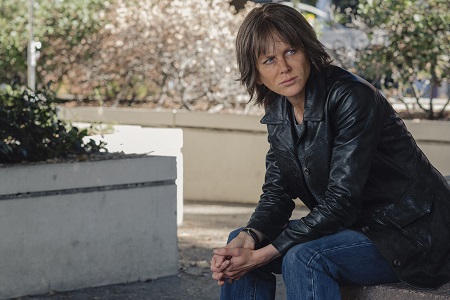 But getting her hands on Silas isn’t going to be simple. Shelby is spiraling out of control more than ever requiring Erin to make her a priority whether the teen wants her to or not. Additionally, the people who know Silas best, including his slippery former lawyer (Bradley Whitford), aren’t going to freely speak with a dogged detective of their own volition. Worse, hunting this madman has also made her relive the past, Erin flooded with memories of her early law enforcement career going undercover for the FBI with a fellow operative (Sebastian Stan), the pair’s working relationship hardly platonic. She’s going to have to battle all of these various complications if she hopes to bring Silas to justice, the detective’s quest for redemption taking on the appearance of a pursuit for revenge as each tick of the clock slowly clicks by.

There’s not a lot new as it pertains to Phil Hay and Matt Manfredi’s (crazy/beautiful) script for the hard-edged cop thriller Destroyer. The basic plot is a film noir staple, while the likes any number of actors ranging from Humphrey Bogart to Ralph Meeker to Clint Eastwood to Al Pacino to James Woods to Sylvester Stallone to Chow Yun-Fat have played variations on characters similar to Detective Erin Bell going back I don’t know how long. But even with that being the case director Karyn Kusama (The Invitation, Girlfight) has managed to energize the material in a manner that is viscerally compelling, she and her star Kidman composing an electrifying thriller that might not be original but sure as heck ends up being easy to watch.

Make no mistake, no matter how dark, disturbing and tragic this violent mystery becomes, it is indeed incredibly easy to watch. Even without the makeup effects that make her look beaten down, withered and ashen from years of too much drink and even more depression, Kidman’s performance would still be astonishing. With each step she takes, with every move to get out of a car or awkward crick of the neck when she interrogates a suspect, I could feel all of the aches and pains the character was trying to endure while still being able to do her job. This current situation is juxtaposed with flashbacks of the detective when she was undercover. As dangerous as her position was at that time hope for a brighter future still intermixed with growing affections for her partner. Kidman transitions between past and present versions of her character with mesmeric ease, the emotional intensity of this performance only growing in strength as things build to their brutal and murderous conclusion.

As for Kusama, the talented filmmaker directs the heck out of the picture, imbuing it with a sense of urgency while also staging a flurry of visually rambunctious set pieces overflowing in an idiosyncratic sense of style that jumps off the screen. But the director just as clearly never loses sight of the bigger picture, Erin’s evolution as a detective, mother and human being front and center for all of the film’s two-hour running time. Even the not-so-surprising twists and turns Hay and Manfredi’s screenplay seems to take so much relish in unveiling are presented in a manner that still put character first and shock value second. Kusama keeps things grounded in her lead character’s journey, each of her movements a cacophony of emotional maelstroms that will shower devastation and tragedy down upon all of those silly, clueless or stupid enough to try and weather them.

I wasn’t always pleased. The aggressive nastiness of the movie is bothersome, especially considering there’s nothing inventive or novel about anything that’s happening at any point of the narrative. Once it becomes clear that Kusama’s presentation of the nonlinear story went further back than I initially assumed it did I ended up having a pretty clear idea where things were going to conclude. Anything approaching a surprise was next to nonexistent, and not even the climactic wallop the entire movie has been building towards produced much of reaction out of me. There were times Hay and Manfredi’s script felt more like a parody of male-driven cop thrillers, especially the low-budget exploitation variety that were so popular during the 1980s, only with a not-so-subtle feminist bent. It can all be a little tiresome and slightly obnoxious, and no matter how well directed it all is or how strong Kidman’s performance might be there are still problems that brought me close to rolling my eyes in incredulous disdain.

But Kusama’s too strong a filmmaker for those feelings to last very long. I was with Erin start to finish, and even if I had a decent idea as to where her quest to bring down Silas was ultimately headed I nonetheless still wanted to see this story come to a climax. Thanks in large part to Kidman’s internalized tenacious ferocity, Destroyer became a cold-blooded thriller I had no wish to tear my eyes away from, its final moments a haunting nightmare of agony, regret and retribution that, while not original, remained intimately effective all the same. 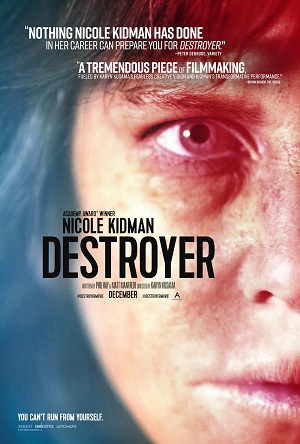