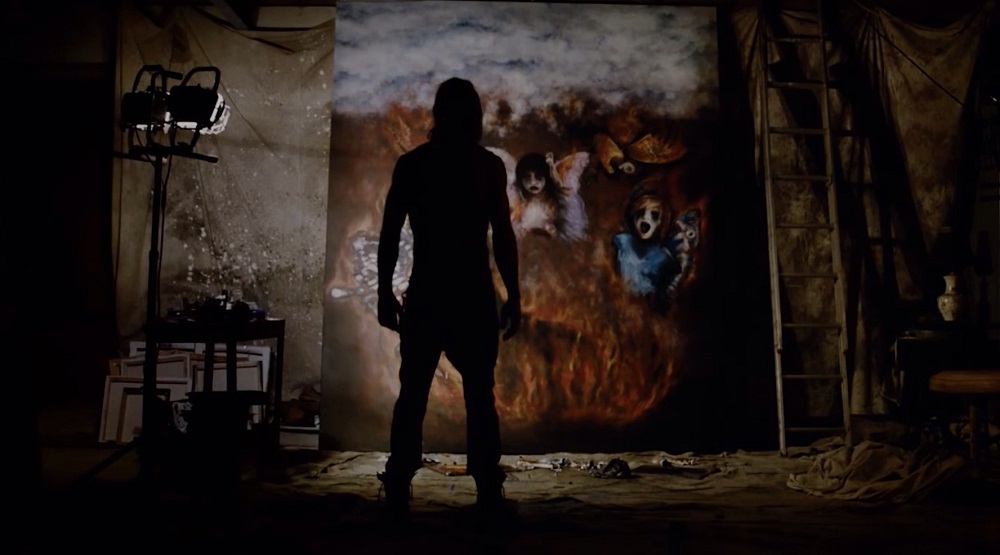 Jesse Hellman (Ethan Embry) is a talented painter and heavy metal enthusiast who has struggled to find success in his chosen profession, taking commissions to paint murals for local businesses in order to do his part paying the family bills. But with those jobs looking as if they’re going to be rolling in on a regular basis, and with his wife Astrid (Shiri Appleby) having a steady job that consistently brings in a steady paycheck, the couple makes the gigantic decision to by a secluded house located deep within the secluded Texas heartland. The deal was just too good, and while teenage daughter Zooey (Kiara Glasco) moans slightly about having to move away from her friends and go to school someplace new, all of them realize this is a major opportunity they can’t afford to pass on.

There’s a reason the house is being sold for such an obscenely low price. While the real estate broker does disclose that the prior residents did die on the premise, he didn’t know exactly how the accident that took their lives ended up happening. Their mentally unbalanced son Ray (Pruitt Taylor Vince), himself also a metal impresario who plays a mean Gibson Flying V, had more to do with this tragedy then the investigating authorities realized. Additionally, he’s been hearing voices for quite some time, the most controlling of them telling him in to feed a certain demonic beast residing in the bowels of Hell its favorite treat. As to what that is, he’ll never tell, but Ray’s infatuation with Zooey should be all anyone needs to see to realize his intentions in regards to the youngster are anything but pure.

Talented writer/director Sean Byrne’s sophomore feature The Devil’s Candy is phenomenal. A follow-up to his eerily unsettling 2009 debut The Loved Ones, a movie that took the John Hughes high school comedy and then gorily spun it on its ear, this horror opus, shown at the Toronto International Film Festival way back in 2015, has been well worth the wait, the psychological underpinnings driving things so unnerving I shudder just thinking about them again now. This is a character-driven, absurdly hypnotic tale of possession, sacrifice, family and faith that pulls zero punches, embracing its metal ethos as it headbangs its way towards its fiery finale. Byrne, drawing on multiple sources for inspiration, uses familiar genre tropes to build his narrative yet still finds a way to make them uniquely his own, this movie a strikingly personal descent into madness I was absolutely floored by.

This is arguably Embry’s best performance. The former teen star of Can’t Hardly Wait fame has managed to carve out a rather nice career for himself as an adult, his highly idiosyncratic choices finding him taking memorable bit parts in films like The Guest as well as scenery-chewing lead roles in thrillers like Convergence. But the film that put him on the map as a surprisingly dexterous talent capable of mining interior territories far more challenging than those he’s usually asked to explore had to be 2013’s Cheap Thrills, director E.L. Katz guiding him and the rest of the talented ensemble (Pat Healy, Sara Paxton and David Koechner) to a place of brilliance that allowed that glorious shocker to achieve a level of magnificence it never would have ascended to without their collective efforts.

The star this time out, Embry is sensational. Whether reveling in their mutual love of metal with his daughter Zooey (Glasco is also excellent), or falling into a creative pit of passion and pain as he finds himself touched by a mysterious, otherworldly muse while painting his latest works, the actor is explosively incredible as he moves from one scene to the next. The character’s love for his family is never in doubt, yet the palpable joy he feels when he realizes that the abhorrent, grotesquely uncomforting picture he’s struck upon a blank canvas depicts his own daughter in absolute misery is equally strong. Embry navigates this psychological minefield with precision, each step Jesse takes an uneasy dance with an unknown devil that might just prove to be Satan himself.

Taylor Vince, a veteran character actor who has given extraordinary performances in films as varied as Nobody’s Fool, Heavy, Beautiful Girls, Mumford and Identity, is a talent who has never really gotten his due, so often this last decade or so popping up in strange, eccentrically whimsical supporting roles and very little else. Byrne uses him magnificently, his sad, searching eyes burning through the screen as he struggles to fulfill the requests asked of him by his demonic masters, even as he finds common interests with Zooey that reawaken the long-buried parts of his soul that have been crushed to near oblivion over an undisclosed number of years doing the unthinkable. He is the yin to Embry’s yang, the two actors sharing precious few moments together yet still managing to find a way to interact and coexist in a manner that is bracing, haunting and repugnantly genuine.

Byrne directs with supreme confidence, and while comparisons to films like The Shinning, Barton Fink, The Exorcist, Rosemary’s Baby and The Omen are fairly obvious, there is an imaginative intelligence to all this music-driven madness that is distinctively one-of-a-kind. The themes and ideas lurking at the heart of the filmmaker’s script are surprisingly profound, their insidious complexity adding much more to the conversation than a brief sideways glance might lead a potentially interested viewer to initially believe is there. This is a rich, aggressively dynamic piece of horror cinema, one that goes way beyond genre to a point bordering on magnificence, The Devil’s Candy a terrifying heavy metal treat worth savoring. 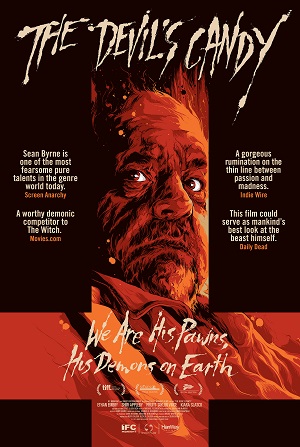