FBI special agent Daria Francis (Amanda Schull) has been dispatched to the small community of Devil’s Gate, North Dakota to investigate the disappearance of Maria Pritchard (Bridget Regan) and her son Jonah (Spencer Drever). Her immediate thought is to question the woman’s husband, notorious loner Jackson Pritchard (Milo Ventimiglia). But after being urged off doing so by the local Sheriff (Jonathan Frakes) she decides to wait and follow other leads until the evidence points her back towards his direction. 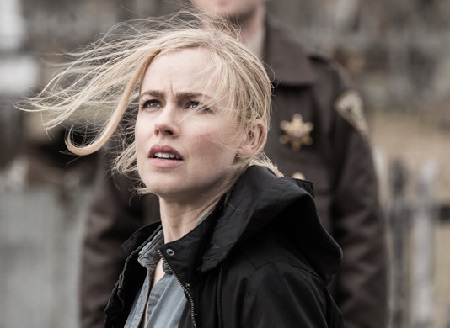 Not to Francis’s surprise, this happens immediately. After visiting Maria’s distraught and worried sister, the FBI agent convinces her sheriff’s department liaison Officer Conrad “Colt” Salter (Shawn Ashmore) to take her out to Jackson’s secluded farm so the two of them can follow fresh leads without giving the trail time to grow cold. What they find on his rundown, boarded-up land, however, is not what they were expecting. Jackson is holed up as if he’s expecting an invasion. More importantly, he has something in his basement, a strange creature unlike anything either Francis or Colt has ever seen before; an animal he claims isn’t an animal at all, but is instead nothing less than a murderous demon spit out unto the Earth from the fiery pits of Hell.

I really dug the first two-thirds of director and co-writer Clay Staub’s Devil’s Gate, the initial setup and the kinetically enthralling second act bolting me forward in my seat as I attempted to put together the pieces of his and fellow writer Peter Aperlo’s screenplay together into some semblance of order. Who Jackson is and what he is fighting is an intriguing question, one the pair take delicious relish in taking their time to answer, Francis especially keen to figure out what is going on for personal reasons of her own she’d rather not dwell on.

The opening prologue sets the tone splendidly, a lone traveler seeing his car break down right outside Jackson’s front door only to realize a little too late he picked the wrong door to knock on for assistance. Staub, a veteran second unit director who worked on Zack Snyder’s two best films Dawn of the Dead and 300, creates tension with effortless confidence, allowing Miroslaw Baszak’s (Pontypool) sumptuously intimate cinematography and Réjean Labrie’s (Wrong Turn 4: Bloody Beginnings) suitably weathered production design to do the majority of the heavy lifting for him. While not afraid of blood and guts, he actually keeps the gore to something of a refreshing minimum for a low budget indie genre effort, and as such the few moments where bellies explode and the skin is peeled away from its flesh end up having a visceral, uncomforting impact that’s decidedly repulsive.

But it is the film’s eerie sound design that is most impressive. Staub uses it as a weapon, keeping both the characters and the audience constantly discombobulated, and it is frequently impossible to know what each little creak in the floorboards, whistle of wind or crack of lightning signifies let alone where they might be coming from. When things do get crazy and mayhem becomes unavoidable, it are these sinister sounds that allows excitement to be generated and suspense to build, and even as Staub and Aperlo’s script runs out of ideas this level of craftsmanship on the technical front allowed me to maintain interest in what was happening even if the narrative itself no longer did. 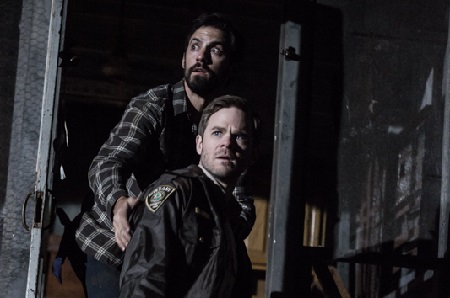 Granted, the screenplay does fall apart, on that point I cannot mince words. While the introduction to this story is strong and the middle portions where the various characters attempt to figure out what is going on while they figure out how to survive the night, once the cat is let out of the bag as to who these creatures are, where they come from and what it is they want things become rather pedestrian in a SyFy Channel movie of the week sort of way. It’s a twist without any punch, one that leads to a denouement even M. Night Shyamalan would likely find contrived, and all these revelations really do is leave things in a John Carpenter-esque cliffhanger limbo reminiscent of Prince of Darkness or In the Mouth of Madness that isn’t deserved and therefore has little in the way of emotional impact.

Until then, though, Devil’s Gate is a solid kick in the pants. Schull and Ventimiglia deliver strong performances, the energy level remains high throughout and the film’s action and suspense sequences are edited with electrifying proficiency by newcomer Guillaume Girard and veteran Yvann Thibaudeau (Leap!). As debuts go, Staub certainly makes a good case to get financing for future gigs, and personally I’m moderately excited to see what he might have in store for us all to get a look at next. 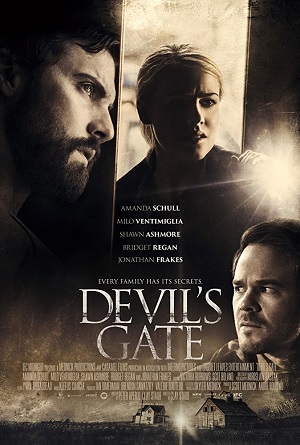