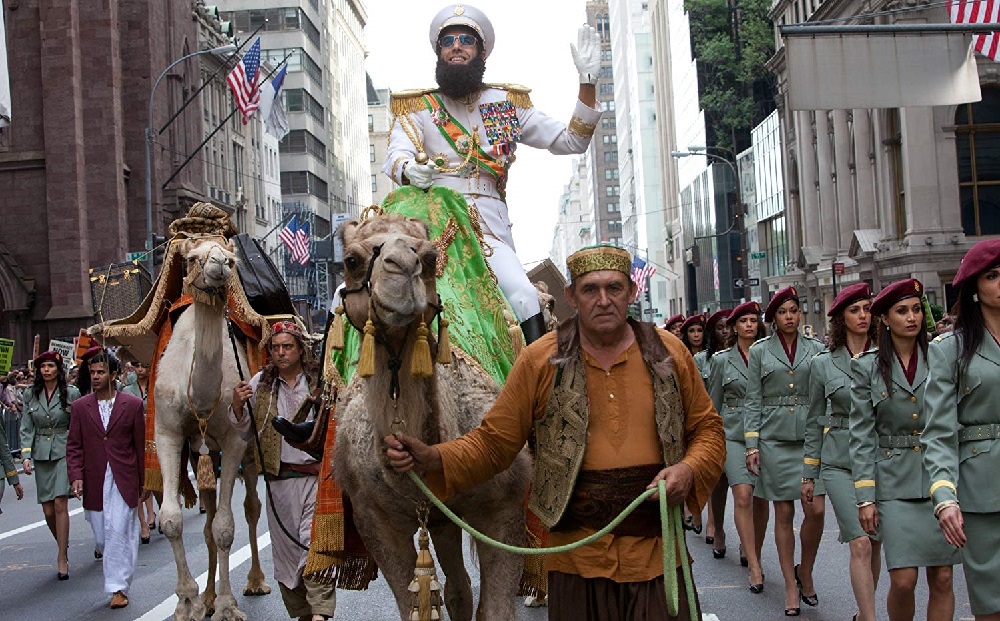 Dictator Haffaz Alladeen (Sacha Baron Cohen), the amoral leader of the small North African country of Wadiya, heads to New York City to deliver an important speech to the United Nations. His oil-rich empire is on the verge of invasion thanks to his yen to possess a nuclear weapon capable of striking America, and nothing nobody says to him, even his most trusted advisor Tamir (Ben Kingsley), will convince him to put his country on the path of peace and allow democracy to come to his lovingly oppressed subjects.

So that’s the setup for Cohen’s latest politically incorrect comedy The Dictator. From there the movie concerns itself with imbecilic doubles, coups funded by unscrupulous oil companies and sinister Chinese politicians, contrived plots to get back into power and a romance with perky environmental activist, exuberantly portrayed by the always energetic Anna Faris. Wildly uneven, the movie is nonetheless very funny, director Larry Charles and his frequent collaborator and star Cohen hitting a shockingly hysterical bull’s eye roughly about half of the time.

That makes The Dictator light years better than the virtually unwatchable Brüno, and while that’s a good thing that does not mean the pair approach the same rarified heights of their borderline brilliant Americana satire Borat: Cultural Learnings of America for Make Benefit Glorious Nation of Kazakhstan. But when this movie is good, it is very, very good. The problem is that when it isn’t good, the film comes very close to being a disaster, and while it is never unwatchable that doesn’t mean sitting there taking it in for a full 83 minutes is as pleasant or as enjoyable as it be all rights should have been.

What do I mean? For long stretches Cohen, Charles and the rest of the writers don’t appear to be sure of what direction it is they want to go in. They take various scattershot potshots at a variety of things but little of what they target hits the mark, the mid-portion of the film just sort of sitting there trying to find a reason to exist making the relationship between Alladeen and Faris’ character never come to life. It’s just a lot of dead air taking up space and nothing more, and no matter how hard the two actors try the majority of the scenes featuring them together fall flat in a way that’s somewhat embarrassing.

But when the movie deals with the dictator’s quest to return to power, when it focuses entirely upon his ideas to sneak into his former hotel room and take back over for the clueless double who has taken his place? That’s pretty wonderful. The whole enterprise soars to ribald heights the likes of which I almost didn’t believe. From a sightseeing trip around the Statue of Liberty, to a journey to a revered Civil Rights era leader’s funeral, to a climactic speech that speaks to the heart of the political discourse and corporate subterfuge putting a stranglehold on our own democratic processes, much of this verbal subterfuge had me laughing so hard I worried I’d pull a muscle. Cohen and Charles score direct hit after direct hit, making the stuff that doesn’t work not matter near as much as it probably would have otherwise.

I don’t want to say more for risk of spoiling any of the gags or ruining any of the surprises. Even to go into more detail on the facets I didn’t care for, and there are plenty of those, feels like it could potentially spoil some of the magic. All that matters is that, for all its faults, The Dictator got me to laugh, got me to think and, more importantly, got me to ponder ideas about democracy and the political process I hadn’t maybe considered before entering the theatre. While not great satire, Cohen’s latest is still pretty good, and it doesn’t take a despot to urge those partial to this type of humor to take a chance on the comedy and buy a matinee ticket. 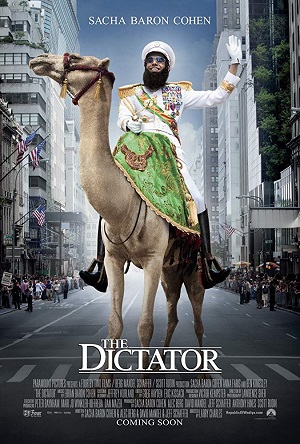