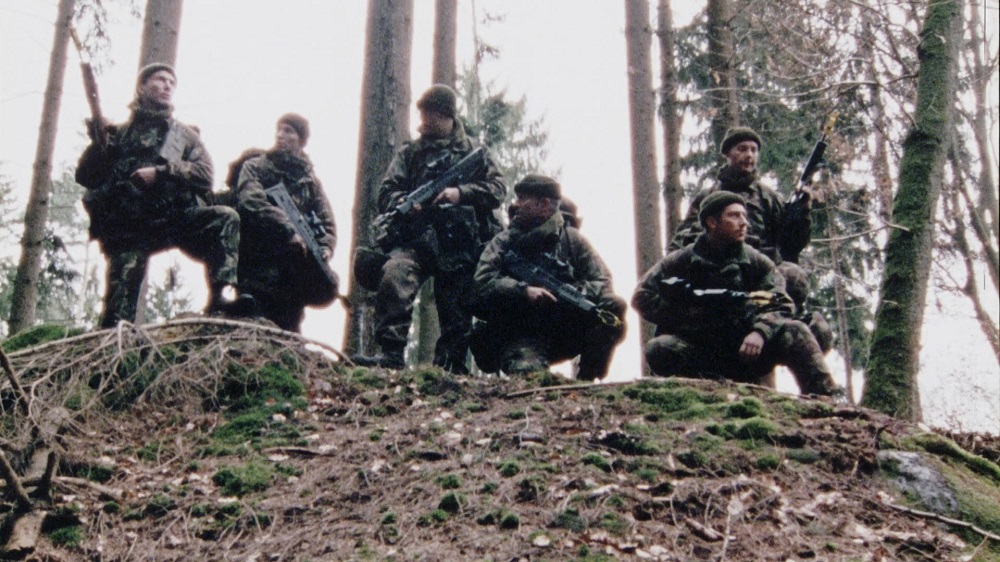 “Up until today you believed there was a line between myth and reality. Maybe a very fine line sometimes but at least there was a line. Those things out there are real. If they’re real, what else is real? You know what lives in the shadows now. You may never get another night’s sleep as long as you live.”

First off, I get that there has been a LOT of talk about this release, most of it quite nasty and filled with venom, almost all revolving around the film’s new hi-def transfer. For more on that, skip down to the portion of the review looking at that aspect as I write about my thoughts in regards to the transfer there. 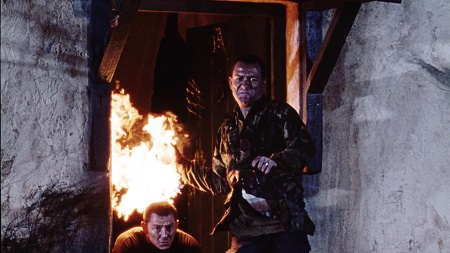 As to the film itself, I love Dog Soldiers. A lot. The first time I watched Neil Marshall’s debut it was on the SyFy Channel (which I believe was still calling itself the Sci-Fi Channel – which still makes a heck of a lot more sense – at the time of original airing) and I almost couldn’t believe something this terrific was premiering on a network known for showing (and still known for showing) mostly shlock bottom of the barrel efforts that don’t really even qualify as B-movies. Even then I knew I was seeing something special, and from that moment on I couldn’t wait to see what the writer/director had in store for me next.

By and large the film is an imaginative riff on both The Howling and Predator, a team of close-knit British grunts stuck in the middle of the woods suddenly finding themselves trapped in a seclude house fighting off a pack of werewolves. Their training mission shot to hell, the men who make it through the initial attack now find themselves forced to use all their skills and training in order to stay off the dinner menu, a trick that’s easier said than done.

Featuring a superlative collection of veteran British character actors (including Sean Pertwee, Kevin McKidd and Liam Cunningham), as well as showcasing two young talents (Emma Cleasby, Darren Morfitt) who I can’t help but wish would have become bigger stars thanks to their appearances here, Marshall directs with astonishing confidence, his slick, tightly-wound script hitting high not after high note as it builds to explosively thrilling conclusion. It’s a grade-A piece of B-movie mayhem, Dog Soldiers one of the greats from the early days of 21st century cinema and it’s easy to see how the director would go on to helm instant classics like The Descent and Centurion in relatively short time right afterwards.

And here it is…the hi-def transfer everyone and their sister is talking about. Do I like it? No, not especially. Does it look better than the previous Blu-ray release? You better believe it. Do I blame Scream! Factory for the subpar transfer? No. Not at all. You can only do the best you can with the materials you are given, and considering the source material for this transfer unless the small distributor was going to pay extremely big bucks for a major overhaul – which was never going to happen, let’s be honest on that front – this was likely the best the film was ever going to look as far as Blu-ray was going to be concerned.

All that said, if original film elements are ever found – and here’s hoping they will be – I truly expect the director and Scream to do the right thing and get a new edition of this down-and-dirty The Howling meets Predator classic out there as quickly as they can. With that, here’s a statement from Neil Marshall posted on Scream! Factory’s Facebook page as a response to the firestorm of controversy that this release has met with: 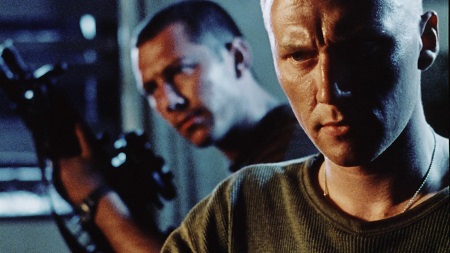 “It seems myself and Scream Factory are experiencing some major flack regarding the Dog Soldiers Blu-ray release. So I figure I should fill in a bit of background here. First of all, I wholeheartedly support the Scream Factory release. The previous Blu-ray (not available in the UK) was made without any involvement from me, and I remember when it came out the general consensus was that the picture quality was not great. All credit to Scream Factory for wanting to involve the film-maker in this process as much as possible.

When they first announced this Blu-ray release last year, the original plan was to work with me to create a whole bunch of original extras based on new interviews with all the key cast and crew, but that the movie itself would essentially be the same version as last time. I asked them to delay the release because I felt that we could do better for the fans and try and track down some original film elements to make a fresh HD transfer. Since the movie never received a theatrical release in the US (although I believe it screened at The Egyptian for a week) I knew we’d have to turn to the UK to find the best possible elements available. What I didn’t know was that after an exhaustive search I’d discover the original negative was nowhere to be found. Neither the UK producer, distributor or film processing lab has any idea where the negative is. Without it we simply could not achieve the kind of high quality HD transfer I would have wished to deliver. Instead we managed to get hold of 2 original cinema prints, and despite being 13 years old and having a few scratches here and there, they represent the most accurate version of the original theatrical release that we could find.

However, as close as they are, they are just cinema prints, and in terms of colour timing for the new Blu-ray we were limited to the parameters of the print itself. Which means, in basic terms, if the contrast is high on the print and the blacks are crushed (as indeed they are) then there is no more visual information to be gained from them. You can’t brighten up the image and see what’s hidden in the darkness like you can when you’re working from the negative or from digital. All that will happen is that the black will turn to grey and just give the movie a washed out flat look.

Another issue seems to be that one scene in particular now seems to be a daytime scene when it used to be a nighttime scene. Well, this is wrong on both counts. It’s meant to be a dusk scene, and since it features shots of the sunset then it’s graded accordingly – with a warm sunset glow that then gets cooler and darker as it fades into night. Again, this is all taken directly from the print. It was never intended to have such an extreme dark blue tint over it. We had major continuity issues filming this sequence because the weather kept changing from dull grey and rainy to bright sunlight. This is far from ideal for pulling off convincing day-for-night photography.

Like it or not, when the movie was originally released in the UK in 2002, the blacks were crushed, the contrast was high, the colours were rich and the image was grainy as f**k, because let’s not forget, this movie was shot on 16mm and blown up to 35mm. So under no circumstances was a Blu-ray of this movie ever going to look as smooth and pristine as a movie shot on 35mm or any of the hi-res digital formats we use today. In fact, transferring it to HD actually highlights the grain just as it does any other detail, so this version inherently looks more grainy than before. It’s unavoidable unless you have the money to do a full restoration and clean-up, but again, you need the negative for that.

So, is this version of Dog Soldiers the best it could ever be? No. Of course not. If we had the negative and a s**t-load of cash we could have done a lot better. Is it the best it could be under the circumstances? Yes. Will it appeal to everybody? No. But that’s movies for you!

At the end of the day everybody involved, myself included, put in a lot of work to give the fans a Blu-ray worth forking out their hard-earned cash for. And nobody involved, myself included, got paid anything for doing it. There are no royalties, ancillaries or anything else. This is not an attempt to exploit the fans. It was, on my part, an attempt to give the fans something new and unique, and not simply a repackaged version of what’s already out there.”

Audio Commentary with writer/director Neil Marshall – Outstanding commentary track, the filmmaker in fine form as he revisits the film and is more than willing to talk about all that was involved – highs, lows and the numerous in-betweens – in bringing it to life.

Combat: A Short Film by Director Neil Marshall (7:37) – Just watch it. You know you want to. You won’t be disappointed. (At least, here’s hoping you won’t be. I certainly wasn’t.)

Werewolves vs. Soldiers (1:01:50) – Almost feature-length retrospective documentary featuring tons of interviews with cast and crew recollecting on their time making the motion picture. One of the best of its kind that Scream! Factory has ever produced for one of its genre releases.

A Cottage in the Woods (13:26) – A nice look at the film’s production design, most notably the central cottage the majority of the action takes place within.

Behind the Scenes Photo Gallery (4:30)

I get it. The transfer for this Dog Soldiers Blu-ray leaves a lot to be desired, and I admit I had to watch it twice in order to decide whether or not I was okay with it myself. In the end, I give Scream! Factory props. They’ve done what they could here while also assembling a set of special features and extras that do this underrated gem proud. While I do hope original elements can be found and new Blu-ray will be produced, for now I’m perfectly okay with this new Collector’s Edition, and I can’t help but think true fans of Neil Marshall’s classic will end up feeling the same when they take everything involved with the release into complete consideration. 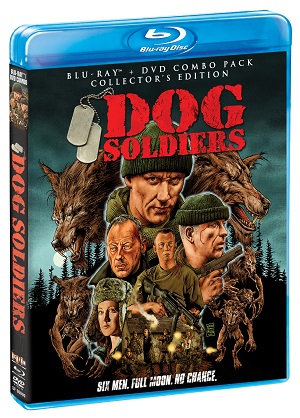