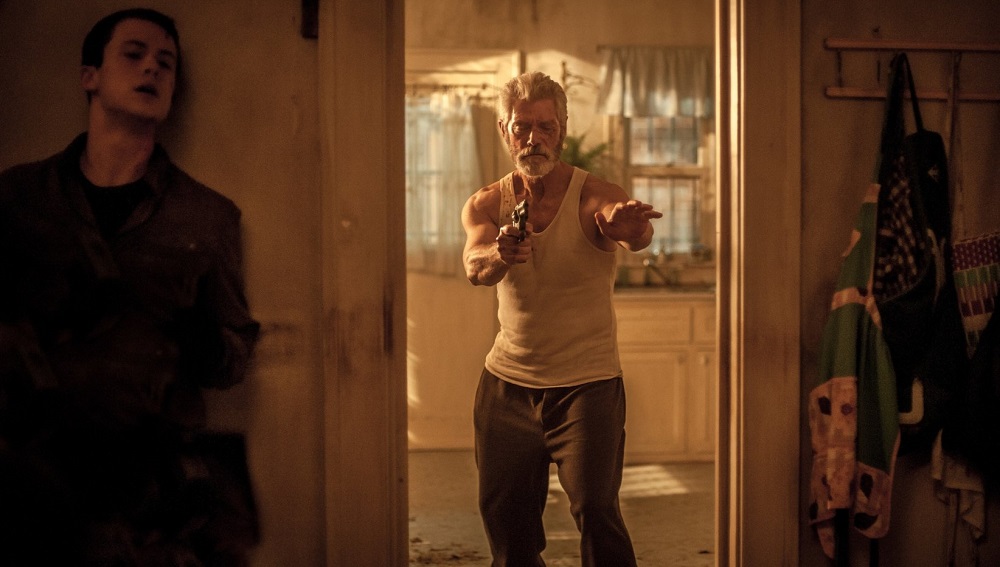 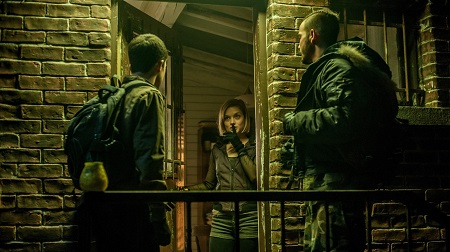 “Rocky (Jane Levy) wants out of Detroit. She has plans to take her younger sister Diddy (Emma Bercovici) and escape to California, all she needs is the cash to make this fantasy a reality. That’s why she’s convinced best friend Alex (Dylan Minnette) to help her and pugnacious boyfriend Money (Daniel Zovatto) in a string of small-time robberies. Utilizing his security guard father’s secret client list, they break into upscale homes, take what they want and make their escape with little chance of being caught just as long as they follow a couple of simple rules: no cash and no major valuables, both of which would bring the kind of law enforcement scrutiny they’re trying to avoid.

With things getting worse at home, Rocky is understandably excited when Money hears news about a major score ripe for the taking. A reclusive blind veteran (Stephen Lang) of the first Gulf War is supposedly sitting on $300,000 in cash, a settlement from the parents of the young woman who killed his daughter in a tragic auto accident. While Alex doesn’t like the sound of this heist, Rocky convinces him to go along with the scheme, assuring him that, just like their other robberies, they’ll be in, out and long gone before anyone knows they were even there.

To say more would spoil a number of the surprises lurking inside director and co-writer Fede Alvarez’s efficient, relentlessly tense sophomore horror-thriller Don’t Breathe. Working once again with his 2013 Evil Dead remake co-writer Rodo Sayagues, the filmmaker has delivered a cat-and-mouse scenario where things spiral out of control with shocking rapidity, and as such nothing goes as planned for this trio of low-rent thieves. This blind vet isn’t as helpless as he initially appears, Alvarez and Sayagues twisting the screws with terrifying precision as the reasons behind his self-imposed seclusion are uncomfortably revealed.

The duo has crafted more a traditional film noir than they have a tale of horror, one where a relatively good person, in this case two of them, make a bad decision based on good intentions only to have the consequences go to a place well beyond catastrophic. But while Rocky, Alex and Money, no matter how decent their collective intentions, do deserve punishment, what befalls them inside this blind man’s abode goes well beyond any the police ever would have enacted against any of them.

And that is where the horror aspect of the tale comes into play, and much like their previous opus Alvarez and Sayagues fearlessly go for the jugular at every opportunity. They are ruthless, our blind veteran going above and beyond as he attempts to fend off the trespassers who have invaded his home while he also attempts to conceal secrets he’d rather stay hidden. This is a bloody, brutal affair, but as visceral as this cruelty can be the greatest scares come from the anticipation of violence, not the actual performance of it.

As much as I respected the way Alvarez put all the pieces together, most notably as he examined the schematics of the blind man’s neighborhood and house before the carnage commenced, I admit to spending more time figuring out how he was connecting it all together than I did getting swept up in the characters or their plight. I had trouble feeling much for Rocky, at least for roughly the first half hour or so, and that was something of a major obstacle I had unsurprising trouble getting past.

Yet I did. There is a certain point where a major secret is revealed and the game changes entirely for our main characters. When it does, all bets are off, the danger level increased and the feelings of guilt, sorrow and pain magnified considerably. There is no letup to the film’s second half, the whole thing a white knuckle train of bloodshed that just gets more disturbing and destructive as things go on. It all culminates in a series of captures and escapes that are bone crunching in their primeval intensity, the level of agitation attained throughout the final minutes extraordinary.

Expertly shot by Pedro Luque (The Silent House), featuring a crackerjack color scheme and marvelous production design by Naaman Marshall (The Visit), much like he did with Evil Dead Alvarez proves himself to be a technical impresario who manages his crack team of craftsmen with skill and confidence. He’s also, once again, helped Levy turn in a superb performance, her turn as Rocky every bit as sensational as her work as Mia in the pair’s previous collaboration. But it is Lang who mesmerizes the most, the veteran character actor known for films as diverse as Manhunter, Gettysburg and Avatar creating a much more three-dimensional portrait of fury, regret and grief than one usually finds in stories such as this. 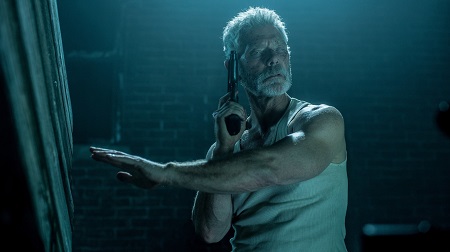 It’s been a terrific year for horror films. The Witch, Under the Shadow, Green Room, 10 Cloverfield Lane, The Wailing, The Conjuring 2, Carnage Park, The Ones Below, Demon, Lights Out, The Shallows, Road Games, Emelie, The Pack, Tag, Nina Forever, The Blackcoat’s Daughter, Baskin, the list of good to great genre entries is a long one. Don’t Breathe probably isn’t at the front of that list, but it’s certainly knocking on the door, the level of dread it manufactures for the extent of its running time incredible. For Alvarez and Sayagues, the film is additional proof these are two guys who know their stuff, and watching them continue to work over the coming years is likely going to prove to be a real, delectably frightening treat indeed.”

Don’t Breathe holds up surprisingly well on second viewing, the magically creepy spell Alvarez and Sayagues end up crafting undeniably long-lasting. I was also even more impressed with Lang’s performance, the breadth and depth of it startling. If the movie’s interior dynamics do feel slightly mechanical, it’s all so expertly staged and acted this isn’t a major issue, the film proving to be an unsettling bit of horror pulp fiction worthy of multiple looks.

Audio Commentary with director Fede Alvarez, co-writer Rodo Sayagues and actor Stephen Lang – Informative and fun commentary track filled with a ton of information fan’s of the film are certain to enjoy learning about.

Deleted Scenes with Optional Director’s Commentary – Eight of them, and it’s easy to see why they were left out of the final cut. Some great insight from Alvarez.

Man in the Dark featurette – Stephen Lang talks a little about how he went about bringing his nameless blind military vet to life.

Still think Don’t Breathe calls to much attention to its interior mechanics, that it’s possible to watch all of the pieces slipping into place in a way that’s slightly artificial. At the same time, the emotional core of this horror enterprise is just too strong to be dismissed, Alvarez’s go-for-broke direction as confident as it is hypnotic. Sony’s Blu-ray presentation is a technical marvel, and as such genre fans are urged to give it a look immediately. 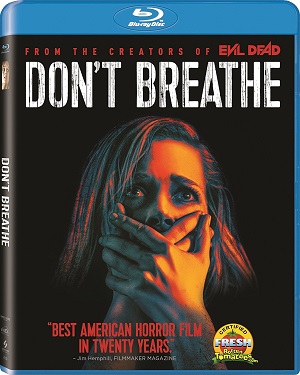