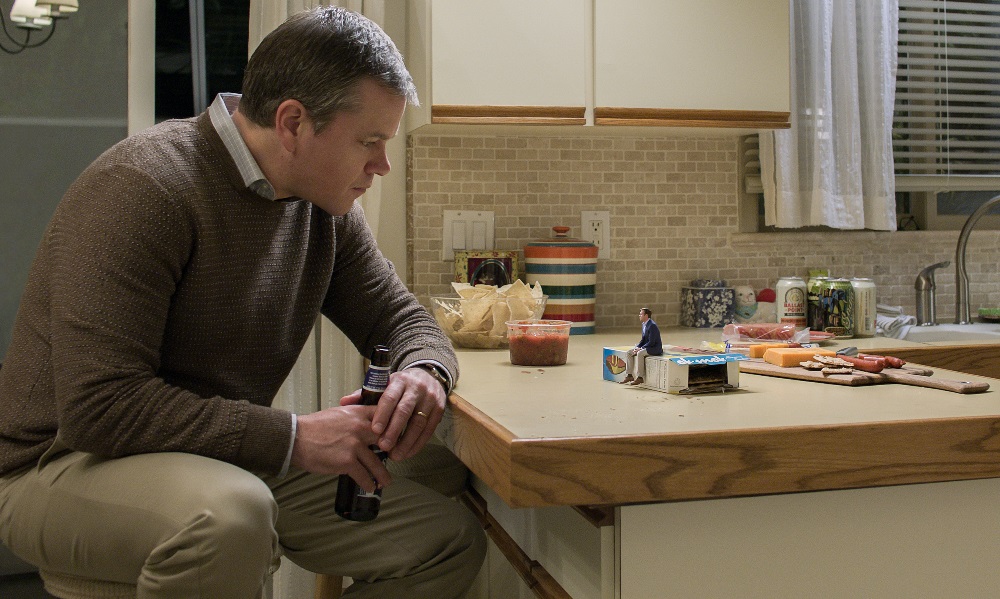 In order to combat overpopulation and climate change, Norwegian scientists come up with what they feel is a breakthrough that might help stop this escalating crisis in its tracks. They’ve discovered a way to shrink humans to a new height of five-inches tall, proposing a 200-year transition for the entire population of the world that, if put into effect, would allow the Earth to recover from the ills done to it by humanity over the centuries. Nicknamed “Downsizing,” it’s an ambitious plan, and like all new ideas ravenous corporations have gone out of their way to monetize and commercialize the process for their own selfish gains. 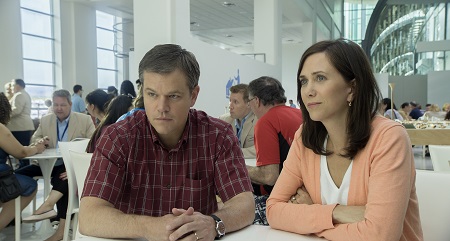 For those in the lower and upper middle class, the idea of Downsizing is an appealing one. At five-inches tall, $100,000 in assets could suddenly transform into millions of dollars when your global footprint no longer makes much of a mark. As such, occupational therapist Paul Safranek (Matt Damon) and his wife Audrey (Kristen Wiig) make the decision to undergo the irreversible process. But she changes her mind before Downsizing commences, leaving her husband in an unexpected diminutive pickle. Suddenly divorced and not having near the assets he originally thought he was going to have, instead of retiring in comfort Paul finds himself working once again in a dead-end job in order to make ends meet, only now he’s doing it alone.

From the mind of imaginative filmmaker Alexander Payne (Election, The Descendents) is born Downsizing, a supposedly wild and wacky comedy of size and scale that’s nowhere near as wild and definitely not even close to being as wacky as the crazy, energetic trailers for the film have painted it to be. Working once again with frequent collaborator Jim Taylor, this story is way more drama than comedy, and while there are certainly laughs to be found there is also a vivid weightiness to the proceedings that grows in density and nuance as events progress to their conclusion. As soon as Audrey makes her surprising decision to not join her husband in the world of five-inch tall human beings, things take a sudden turn towards the serious that’s honestly jarring, things only becoming more socially satirical and emotionally grim from that point forward.

The film introduces a blossoming friendship between Paul and a political dissident named Ngoc Lan Tran (Hong Chau) who was downsized against her will. She selflessly gives her time and energy to assist others who have either met with a similar fate or were shrunken down in order to invisibly prop up this seemingly perfect society by doing all the menial jobs all of the freshly wealthy citizens would now rather now not do themselves. Payne and Taylor also add another subplot concerning entrepreneur Dusan Mirkovic (Christoph Waltz), a pint-sized titan of industry who discovered you can make tons of money selling luxuries to these same citizens, extravagances they could never have afforded back when they were full size.

If only the film’s quality matched its ambitions. Sadly, as terrific a filmmaker as Payne has proven himself to be, his latest piece of social humanistic commentary is a mess. It’s a series of escalating subplots that bring to light a variety of issues which include economic disparity, white privilege, closet racism, global warming and political malfeasance and does so with all the subtly of a snow shovel smacking the viewer upside the head.

What’s weird is that, for as solid as the staging is, as strong as the supporting cast undeniably proves to be (an internationally star-studded list that includes the likes of Udo Kier, Rolf Lassgård, Ingjerd Egeberg, Jason Sudeikis, Maribeth Monroe, Neil Patrick Harris, Laura Dern, Niecy Nash, Mary Kay Place, Pepe Serna, Joaquim de Almeida and Margo Martindale) and for as intriguing as the concept might be, there’s precious little here that ends up making any lasting impact. As things grow more and more serious, as the film starts twisting itself into knots in order for its themes and ideas to have an increasing impact, it all starts to feel more like a preachy professorial debate than it does an entertaining examination of these various characters attempting to deal with this new world they now find themselves living in. When things take something of a Melancholia meets Seeking a Friend for the End of the World twist, the foundation Payne and Taylor have built their structure upon begins to crumble into irrelevance, the heart and humanity integral to making any of this work losing its cynically satirical edge and in the process becomes nothing short of mawkishly self-important in its melodramatic excess. 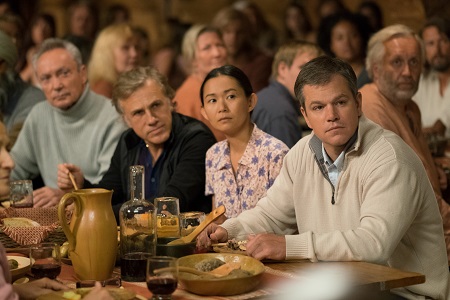 Then there is Tran. It’s not really my place to say, especially because I get what Payne and Taylor are trying to say, the varying points they’re making important, valid and well worth listening to. But the character hits so many cliché, stereotypical benchmarks she comes very close to being racially insensitive, and if not for Chau’s magnificent performance it’s likely this could have turned out to be 2017’s most revoltingly conceived character. But the Inherent Vice and “Big Little Lies” actress is extraordinary, somehow walking an unbelievable fine line as she goes out of her way to invest Tran with oceans of emotional gravitas, in the process giving her multifaceted interior gradations that I’m not certain would have existed if not for her monumental efforts.

But that’s Downsizing in a nutshell. So many talented people are doing some of their absolute best work, Stefania Cella’s (The Great Beauty) inspired production design almost enough in and of itself to warrant the price of a matinee ticket. Yet it’s consistently all for naught, the filmmaker’s vision never materializing in a way I found even moderately compelling. This movie’s many issues outweigh its attributes so significantly I can’t help but feel like this will go down as one of the year’s most frustrating disappointments, and for a director as undeniably talented as Payne  there’s nothing small about just how upsetting I find making a statement like that one to be. 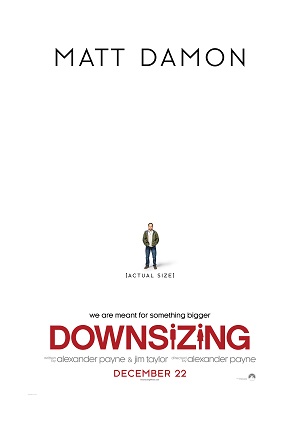