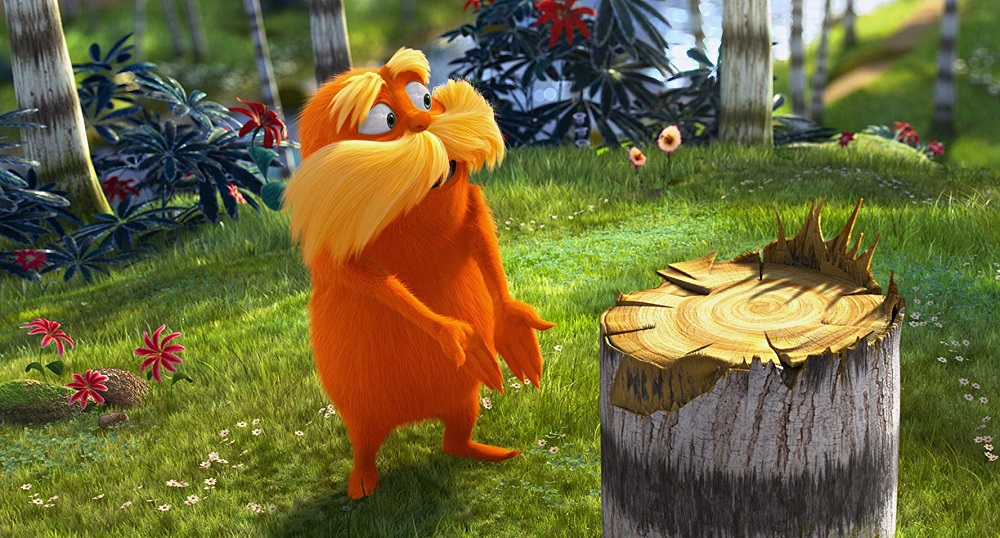 CG Lorax Sadly Speaks for No One

The story of Dr. Seuss’ The Lorax is easily one of the most intimately simplistic of author Theodore Geisel’s career. A newcomer known only as the Once-ler (voiced by Ed Helms) has come to the Truffula Tree forest. He notices the Bar-ba-loots in their Bar-ba-loots Suits. He sees the Swamy Swans flying through the crystal blue skies. He takes note of the Humming-Fish splashing around in time with their rich, multilayered harmonies. But most of all he takes note of the Truffula Trees, cutting one down to use their rich, multi-colored silken tufts to knit together his very first Thneed because, after all, a Thneed is a thing that just everyone needs. 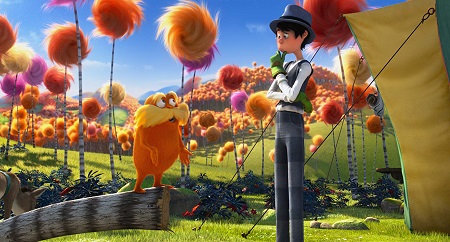 Enter the mystical Lorax (Danny DeVito). He speaks for the trees, and with the Once-ler’s arrival he foresees disaster, doing all he can to convince this two-footed being with axes that choppity-chop, pipes that gloppity-glop and smokestacks that fill the air with smoggy-smog to cease his destructive antics before it’s too late. He knows that if a balance between progress and nature cannot be maintained both will fall to ruin, and unless someone makes a stand the Bar-ba-loots, the Swamy Swans, the Humming-Fish and the Truffula Trees will vanish away until even the memory of their existence disappears forever.

It took the classic 1972 animated television adaptation a brisk 25-minutes to tell this story, and even that was padded out with a handful of retro songs that barely propelled the story forward and only existed so the animators could indulge themselves with brining more of Seuss’ iconic images to life. But it worked beautifully, the Once-ler telling his story to a young boy interested in knowing why the Grickle Grass had taken over the barren fields and why a small circle of stones with the word ‘Unless’ stood at the base of the old man’s home.

So why, pray tell, did directors Chris Renaud (Despicable Me) and newcomer Kyle Balda, along with screenwriters Ken Daurio (Hop) and Cinco Paul (College Road Trip), feel the need to tack on an additional story involving a 12-year-old kid named Ted (Zac Efron) living in the all-plastic town of Thneedville and his infatuation with high school freshman Audrey (Taylor Swift)? Why the need to muddy the waters with so much visual razzle-dazzle that the entire point of Seuss’ story gets lost amidst all the sound and fury?

The honest answer? I’m guessing the filmmakers didn’t trust that their potential audience would have the attention span to handle a story as simplistic and as straight-forward as this one is. An environmental parable written before the environmental movement or the realities of Global Warming were ideas lurking in the back of a person’s mind let alone topics for debate and conversation, this should have been an impossible story to muck up. Yet Renaud and company do just that, and any chance the morals and ideas presented by Seuss would emerge unscathed (let alone intact) are lost in the cacophony of overblown animated sitcom theatrics the movie sadly revels in.

In fairness, when Dr. Seuss’ The Lorax focuses on the Once-ler and his relationship with the Lorax the movie does still achieve some of that intimately melancholic loveliness that can be found in both the source material as well as that aforementioned 1972 animated television special. When it is just the two of them, when the directors allow all the histrionics to die down, there is an articulate specificity to events that’s impossible to dismiss, and for these few precious moments I am almost willing to give the film something of a polite pass. 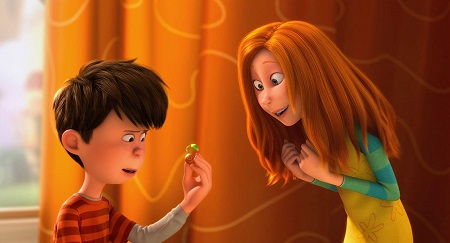 Sadly, this ends up being something I simply cannot do. All of the stuff in Thneedville, any of the flashback scenes involving the Once-ler’s horrifically off-putting family, moments of absurd levity involving marshmallows and/or an elderly grandmother (Betty White) prone to wisecracks, everything concerning a self-possessed ‘air magnate’ named O’Hare (Rob Riggle), all of it drove me completely around the bend. Seuss’ story is lost in all this chaos, his themes diluted to the point they come close to being meaningless, and in the end all this movie did was leave me in a state of disappointed despair I had trouble afterwards trying to figure out how to free myself from.

To paraphrase from Seuss’ original storybook, he is the Lorax, he spoke for the trees, he spoke for the trees because trees have no tongues. But the CG animated disappointment that is Dr. Seuss’ The Lorax doesn’t speak for anyone, no one at all, and if it does have a tongue it’s tied itself into so many knots trying to decipher its points beyond the obvious ones is infuriatingly hopeless. 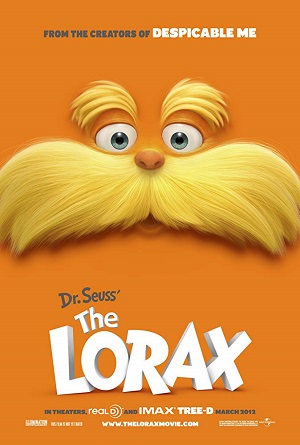