Don’t Need to Be Inebriated to Love Drinking Buddies

Kate (Olivia Wilde) and Luke (Jake Johnson) work together at a small independent craft brewery in Chicago. They’re best friends, and in a perfect word they’d probably be dating. But she’s seeing the erudite Chris (Ron Livingston) and he’s in a long-term relationship with outgoing, vivacious Jill (Anna Kendrick), so whatever feelings they do have for one another are going to have to remain in check. But that’s difficult when the four of them head off into the woods for a weekend together, spending time in Chris’s secluded cabin with no other cares other than those they bring along with them.

Reminiscent of old Hollywood multi-couple dramatic comedy classics like Carnal Knowledge and Bob & Carol & Ted & Alice, Joe Swanberg’s Drinking Buddies is the independent filmmaker’s most confident and self-assured effort yet. The man behind the Greta Gerwig vehicle Hannah Takes the Stairs has outdone himself, the writer/director crafting characters who feel honest while also giving them dialogue that sparkles with imaginative authenticity. This is a movie, much like Frances Ha (which, coincidentally, features Gerwig in a breakout role), is reminiscent of Before Sunrise, Before Sunset and Before Midnight, while it is also a kindred spirit to Woody Allen opuses like Husbands and Wives and Hannah and Her Sisters. It is as delightful as it is thought-provoking, as humorous as it is emotionally pure, and as such the film becomes one of August’s must-see enterprises audiences looking for something a bit outside of the box owe it to themselves to seek out and discover.

Not that convention is entirely avoided. Kate and Luke’s relationship follows a familiar pattern, the mistakes and missteps they make not altogether surprising. I’ve seen much of this before, and while the settings might be a little different and the antics inspired I still knew where the story was headed practically every step of the way.

Funny thing, I’m just fine with that. The reasons for this are simple: I believed in Kate, Luke, Chris and Jill as people, not as cinematic constructs, and so I was more than willing to follow them no matter how obvious the path they were walking on turned out to be. There’s a naturalistic give and take that’s never forced, rarely obnoxious and almost never false, everything they say or do having an inherent truthfulness that makes all that transpires feel like it’s really happening right at that very moment.

It helps all the actors are excellent, especially Wilde and Kendrick. As good as Johnson and Livingston are, as nicely as they develop chemistry with both of their costars, this is a film for the ladies, and to say both run wild with the opportunities they’ve been gifted would be understating things considerably. Wilde, in particular, makes the most of things, crafting a character who is intensely likeable yet one who is also equally flawed. It’s a self-effacing performance, one that doesn’t shy away from Kate’s more narcissistic qualities. At the same time she’s intensely welcoming, making the character easy to warm to and let creep into one’s heart in all the best ways imaginable.

Swanberg’s direction is devoid of the cynical whirligigs that marred many of his earlier efforts (or, at least the ones I’ve seen; his films, save Hannah Takes the Stairs, as interesting as they might be, aren’t exactly easy to track down), so relating to the characters and situations he’s crafted turns out to be stunningly easy. There is also a fluidity to his filmmaking style that’s refreshingly sparse, the filmmaker allowing the situations to speak with a subtle brevity that forces the audience to make up their own mind as to what is going on and why.

Could I say more? Certainly. There are plenty of layers worthy of dissecting and sifting through, not the least of which is the beautiful resolution to Luke and Jill’s storyline. But the glory of Drinking Buddies is in discovering all of its pleasures without too much knowledge as to what is going to happen before one enters into the theatre. This is a very good movie, the end product signifying Swanberg’s leap from promising talent to bona fide auteur with pleasurable aplomb. 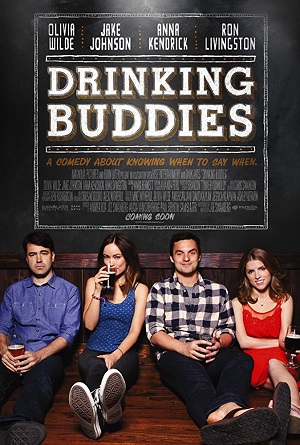