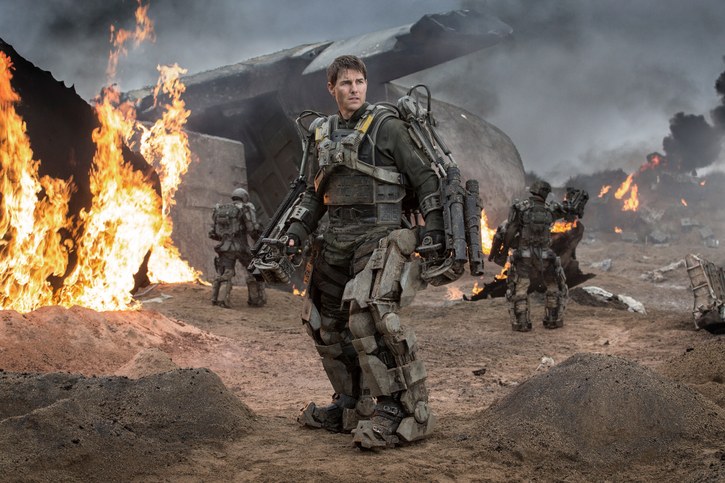 Major William Cage (Tom Cruise) is having a bad day. Never having seen a day of combat, the soldiering neophyte inexplicably finds himself part of the biggest, most important battle the Earth has ever known. The combined forces of the planet are all on the beach in France to hopefully take down an alien invasion force that has raged across Europe with unstoppable fury. This is humanity’s last stand, victory hopefully nigh, the only unusual piece being Cage’s presence right in the middle of all the chaos.

Things just don’t go bad, they’re disastrous, the aliens – their combat troops nicknamed ‘Mimics’ – apparently waiting for them, striking down the human forces as if they were flies running into a particularly bloody flytrap. Worse, Cage gets to inexplicably live these events over and over and over again. Each time he dies on the battlefield he is reborn the morning before the fight. It is as if some irascible god-like force finds it amusing to see him run around like Sisyphus charging up a hill he’ll never be able to get to the top of. 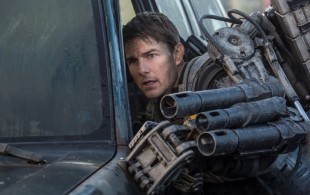 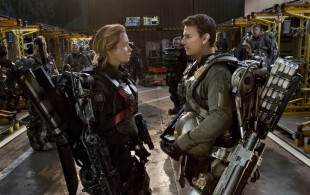 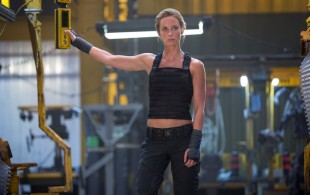 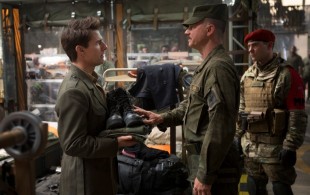 If Edge of Tomorrow sounds like some harebrained combination of Groundhog Day and Source Code you wouldn’t be alone in making those assumptions. Heck, you can throw in facets of Independence Day, Star Trek: First Contact and Saving Private Ryan into the mix for good measure, director Doug Liman’s (The Bourne Identity, Fair Game) adaptation of Hiroshi Sakurazaka’s Japanese novel All You Need Is Kill not exactly hiding the fact it’s cribbing from a bevy of well-known source material.

Not that it matters. Liman is at the top of his game, confidently handling all of the pieces of this tale with pinpoint precision. The script written by Jez and John-Henry Butterworth (Birthday Girl), with an assist from The Usual Suspects and Jack Reacher scribe Christopher McQuarrie, is top-notch, mixing all the pieces of this adventure with massive amounts of imagination. From the moment Cage wakes up for the first time the day before the invasion onward, Edge of Tomorrow is a rousing adventure filled with pulse-pounding thrills and surprising dashes of character-driven humor, the film a breathless two hours of fun worth celebrating.

The crux of the narrative finds Cage meeting every day – the same day – with soldier Rita Vrataski (Emily Blunt), convincing her each morning that they do know one another and that she has to train him to be a better fighter so they can survive the next day’s carnage. They are aided by scientist Dr. Carter (Noah Taylor), the one man who knows what is happening to Cage and why, his insights key to finding the chink in the Mimic’s armor which theoretically could allow humanity to prevail.

Liman doesn’t just give Cruise and Blunt a magical playground to perform within, he also makes sure to give veteran character actors like Bill Paxton and Brendan Gleeson signature scenes that are as memorable as anything else that takes place inside the circular time-jumping mayhem. The director never loses sight of where things are headed, juggling all the pieces of this sci-fi puzzle with confidence. Liman keeps character motivation at the center of the drama, unafraid to slow things down to showcase the price of failure or to allow a bit player time in the spotlight.

Unfortunately, the climax isn’t nearly as extraordinary as what comes before it, but that’s sadly expected. There are only so many places where things can end up, and that Liman and the screenwriters don’t go out of their way to try and do something outlandish isn’t altogether shocking. There is a final twist, and while it is a big one, it also doesn’t make a ton of sense. Still, I can’t say I was at all displeased by the final images Liman chooses to go out on, and if this story were to continue these last seconds deftly presage a plethora of intriguing possibilities.

Edge of Tomorrow works. It is anchored by a strong turn by Cruise that has him initially playing charismatically against type in ways I’m not sure I’ve ever seen. As events progress, Cage slowly becomes the Top Gun meets Mission: Impossible hero we’ve come to love, getting to that point such a beguiling joy it almost makes the ticks and mannerisms the actor’s best known for almost feel brand new. Cruise proves that, no matter what anyone thinks of him as a person, as a movie star there is none bigger or more magnetic than him anywhere on the planet. 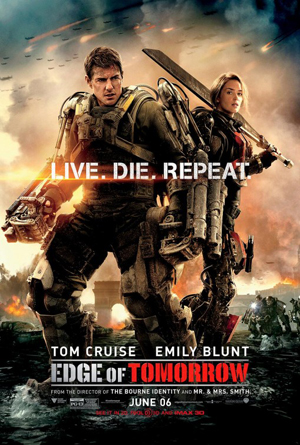