A big part of me wants to give The Eyes of Tammy Faye a hard time for being too nice. But, thanks to superior performances from Jessica Chastain, Andrew Garfield, Vincent D’Onofrio and a scene-stealing Cherry Jones, there is never a dull moment in director Michael Showalter’s (The Big Sick) confidently heartwarming, if frustratingly tame, biopic.

Unlike the superb 2000 documentary it’s based on, this film rarely attempts to take televangelists Jim (Garfield) and Tammy Faye Baker (Chastain) to task for their part in the spectacular rise and fall of their Praise the Lord (PTL) ministries in the 1980s. While Showalter and screenwriter Abe Sylvia don’t excuse the pair’s misuse of the money raised from their roughly 20 million parishioners, the filmmakers don’t go to great lengths to hold the Bakers accountable, either.

It’s all pretty conventional. Things kick off with a standard meet-cute between Jim and Tammy Faye while both are in college. From there, events progress to their subsequent marriage and rapid rise to fame as the leaders of the PTL television network. After that, it’s a skip and a jump to the financial improprieties that would lead to their downfall and give Jerry Falwell (D’Onofrio) all the leverage he needed to steal the pair’s empire right out from underneath them.

Showalter doesn’t seem too interested in digging into all this convoluted craziness. If anything, he and Sylvia withhold their most serious condemnations for Falwell and the craven—some might even say diabolical—hypocrisy of his dealings with Jim and Tammy Faye. But even those criticisms, most of them saved until the film’s final 20 minutes, aren’t particularly scathing, and moviegoers who are only glancingly familiar with the PTL story are likely to come away without having learned anything they didn’t already know.

Where the filmmakers do succeed is in examining the relationship between Tammy Faye and her mother Rachel Grover (Jones). Serious heat fuels every scene Chastain and Jones share. The electricity passing between them is palpable, and I loved how authentic they make this cantankerous, yet still loving, mother-daughter bond.

Granted, I can’t say this is altogether shocking considering every performance is nothing less than magnificent. I can talk all day about the superficial observational nature of the screenplay, but as far as each actor is concerned, there’s nothing to complain about. This is a richly talented ensemble, and every member puts forth their best effort. It’s thrilling to watch them work off one another with such vivacity, Showalter giving his entire cast the freedom and the room to make each character their own in ways that are continually mesmerizing.

But I couldn’t escape the hope that the director and his creative team would dig down underneath the caked-on eye makeup. There’s plenty to be said about how Jim and Tammy Faye’s insane truth-is-stranger-than-fiction history relates to the growth of rightwing fundamentalist nonsense throughout the latter decades of the 20th century before exploding into violent insurrectionist lunacy and science-denying psychosis over the past few years.

This makes The Eyes of Tammy Faye something of a vexing conundrum. Judging the film on what it is and not on what I wanted it to be, I must admit I was never bored by Showalter’s drama. There was always something going on that drew my attention, and, solely on the strength of Chastain’s magnetic commitment to bringing Tammy Faye back to life, I was always curious to see what was going to happen next.

Is that enough to warrant a recommendation? I honestly don’t know, and I can’t say any amount of intense prayer on the subject is going to bring me closer to enlightenment on an answer anytime soon. 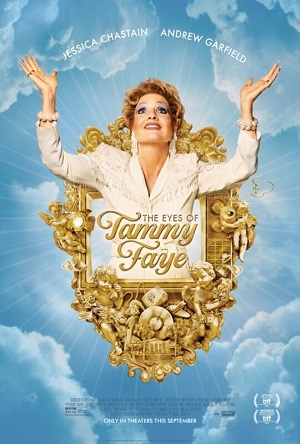