There is a great quote attributed to Harrison Ford revolving around his supposed bemusement in regards to the dialogue Star Wars impresario George Lucas came up with for him and the rest of the cast to say during filming. It’s marvelous for a lot of reasons, most of which would become readily apparent when the prequels saw the light of day over two decades later. But what it clearly pointed out was that great actors, or at least ones oozing charisma and charm, can overcome just about anything, even bits of absurdist nonsense revolving around mystical forces that guide people on their respective journeys while binding the universe together into one continuous strand.

What does this have to do with director Sam Taylor-Johnson’s (Nowhere Boy) and screenwriter Kelly Marcel’s (Saving Mr. Banks) adaptation of author E.L. James’ massively popular Fifty Shades of Grey? What was ridiculous and farcical in book form becomes massively more so when showcased cinematically, some of the more idiotically insane lines spoken by the characters magnified to the nth degree when uttered out loud. There are moments when a person has to ask themselves if what’s being said is in fact actually being spoken and isn’t a figment of one’s imagination, the unintentional hilarity close to being more than the average person should ever have to bear. 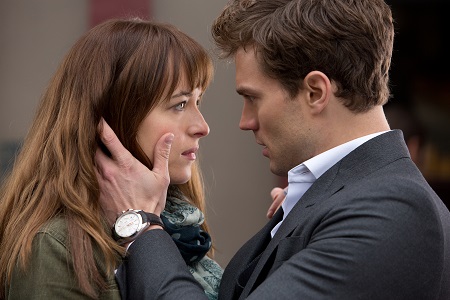 Yet star Dakota Johnson, somehow, someway, gets out of this almost entirely unscathed. Playing curious Washington State University college student Anastasia Steele, she’s a breath of fresh air, managing to bring an energy to the proceedings that otherwise never would have existed without her. More than that, she’s able to let even the most lunatic pieces of dialogue drip off her tongue in ways that feel fresh, close to exciting, giving things a dramatic impetus that’s always intriguing, even if the central romantic quagmire she’s gotten herself involved in is sadly anything but.

Better, the young actress manages to rise above the sexual silliness inherent to James’ tale, and where a lesser actress would be consumed by the material, that isn’t nearly the case with Johnson. She does all that’s asked of her and more yet does so in a way that feels natural, authentic, finding an inner serenity that’s beguiling. She’s got a magnetism that leaps right off the screen, Don Johnson and Melanie Griffith’s little girl not doing a single thing to embarrass herself, portraying a character that could have – maybe even should have – had the word ‘disaster’ written all over it in brightly blinking heart-stopping neon.

If only the same could be said of co-star Jamie Dornan. He’s Christian Grey, the sexy and mysterious Seattle millionaire and businessman who becomes infatuated with sexual neophyte Steele. So great alongside Gillian Anderson in the series “The Fall,” here Dornan is a wooden, unemotional stick figure who’s about as sexy as slap to the face with a cold, three-day-old slice of bologna. On top of that, his readings of dialogue lifted from the source material are so toothless, so flatly monotone, it’s as if they’re being uttered by a computer program and not a living, breathing human being. He’s not so much terrible as he is pathetically mechanical, Dornan nothing more than a preening plastic mannequin looking for a stand to lifelessly impale himself on so he seemingly wouldn’t have to move ever again.

For those unfamiliar with the plot, and considering the millions upon millions who have read the book I imagine there aren’t a heck of a lot those out there, Christian Grey doesn’t believe in love, doesn’t care to have romantic relationships. Instead, he wants to dominate the women who come into his life sexually, transform them into exactly what he wants them to be while never allowing them to see all it is that makes him tick. This changes when he meets the quirky, enigmatic Anastasia, and while he still doesn’t want romance he almost can’t help but break all his most cherished rules while he attempts to make her his.

Talking about what it is that she sees in him isn’t worth the time, James’ fiction nothing more than syrupy nonsense that even with some BDSM plot points isn’t all that far removed from your basic dime store Harlequin novel. Even with something of a cliffhanger denouement (there are two more books in the series, after all), there’s nothing all that exceptional that ends up taking place, little that is out of the ordinary or unexpected. If the story is Anastasia’s sexual coming of age what she learns and does is hardly incredible, her journey as rote and as routine as they come.

In some ways I guess every generation deserves its own 9½ Weeks. Thing is, although that supposedly steamy romance carries a fairly hefty reputation, truth of the matter is that Adrian Lyne feature is as abysmal now as it ever was back during its original release. As good as Johnson might be – and she’s admittedly glorious – in many ways Fifty Shades of Grey makes a terrifically terrible companion piece to that 1986 effort, and frankly that’s about as close to giving this otherwise irredeemable piece of a pulp pabulum a compliment as I can get. 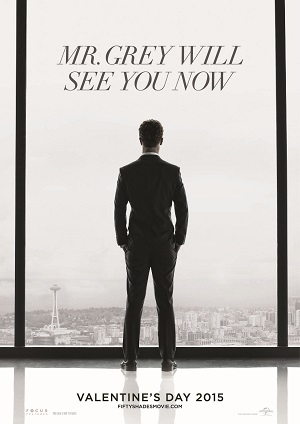