“[Don’t] worry about being the next me. Be the first you.”

Here’s what I wrote about this one for its initial theatrical release:

“Inspired by a true story, the MGM / WWE co-production Fighting with My Family is a real-life Rocky set in the razzle-dazzle world of professional wrestling and revolves around a working-class British family who all love the larger-than-life spectacle and violent pageantry of the sport with every beat of their collective heart. It is the journey of the clan’s youngest child, 18-year-old Saraya Knight (Florence Pugh), a teenager given the opportunity of a lifetime when she is selected to go to Florida and train with other wrestling hopefuls, all of whom dream of being the next star of the WWE pay-per-view stage and become the next Dwayne “The Rock” Johnson or John Cena.

I think the reason this all works as well as it does is because Merchant understands that the Knight family dynamics have to be genuine otherwise nothing that happens in the movie would mean anything substantive. As such, he adds a grizzled, somewhat uncomfortable and uniquely British working-class varnish to the story that’s reminiscent of the films of Mike Leigh or Ken Loach. He grounds parents Ricky (Nick Frost) and Julia (Lena Headey) in that milieu with unctuous ease, their parental smothering of both Saraya and Zak coming as much from a place of selfless love as it also is a primal need to pass on their voluminous love for wrestling to their remaining two children. 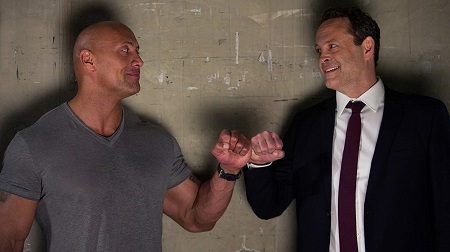 Yet this remains Pugh’s showcase, and as great as many of the elements are, and as solid as the final bout between her and a defending world champion in front of a packed auditorium of countless thousands and millions of additional viewers all around the globe might be, watching this young actress strut her stuff so confidently is worth the price of a matinee ticket all on its lonesome. She’s the reason Fighting with My Family ends up working as well as it does, this triumphant piece of a pop inspirational sports hokum a royal rumble of enjoyment that had me pinned to my seat in happiness from the opening bell all the way to the climactic body slam.”

This movie is just a heck of a lot of fun to watch. It’s very entertaining. While the director’s cut that is also included here doesn’t really change anything substantive (the running time for both versions is identical), it is interesting from the standpoint of seeing some of the minor tweaks that had to be made for the film to receive a PG-13 rating. None of which makes Fighting with My Family and less a joy, and am glad I took the time to give it another watch.

Stephen Merchant’s Fighting with My Family is a rowdy, crowd-pleasing inspirational sports tale that overflows in both drama and laughs, everything building to a rousing climax that plastered a great big smile on my face. Even knowing nothing about the true story or being someone that’s particularly interested in the WWE, I still got a big kick out of this movie, and I’m happy to add the title to my own personal Blu-ray library. 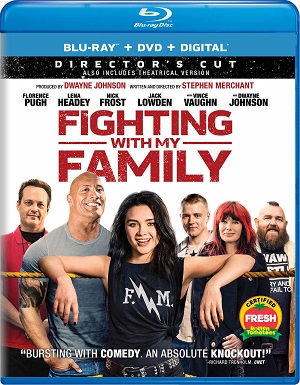