Inspiring Hours a Fine Tale of Heroism and Survival

As a massive storm rages up and down the East Coast, the SS Pendleton, bound for Boston, MA, is ripped in two. The first assistant engineer Ray Sybert (Casey Affleck) is stranded aboard the stern of the ship along with 32 other men, all uncertain as to what they should do and understandably fearful they are all about to die. Urged to take command by those who know him best, he puts forth a series of ideas he’s all but certain are the only things that could help them manufacture a miracle. However, to pull what he has imagined off, they’ll all have to work as a single-minded unit, and considering the deteriorating mental state of a large swath of the survivors the chances of that sit precariously between slim and none. 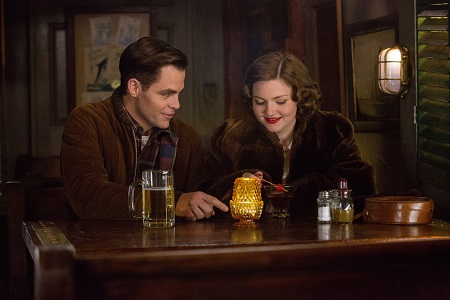 At the U.S. Coast Guard Station in Chatham, MA, Captain Bernie Webber (Chris Pine) is waiting to hear if Warrant Officer Daniel Cluff (Eric Bana) will give his permission to him to wed local girl Miriam (Holliday Grainger). It’s only a formality, but one Bernie feels compelled to follow nonetheless. But everything changes the moment news of the SS Pendleton’s situation comes to light. Instead of granting him permission to marry Miriam, Cluff must instead send Bernie into harm’s way, ordering him to assemble a crew and to go out and brave the elements to see what they can do to save what’s left of the floundering ship’s crew.

The Finest Hours, adapted from the best-selling book by Michael J. Tougias and Casey Sherman, is based on a true story of heroism and survival that happened off the coast of New England on February 18, 1952. Director Craig Gillespie (Lars and the Real Girl, Fright Night) and his trio of screenwriters aren’t exactly subtle in their approach, and there are times the melodramatic schmaltz dial has been turned up higher than necessary, but overall this is a surprisingly effective motion picture, one that hits more right notes than it does hollow ones.

If anything, the story following the plight of Sybert and his fellow SS Pendleton survivors is the more fascinating of the two parallel narratives vying for the audience’s attention. Not only is Affleck superb, underplaying his stoic, intelligently-focused character to perfection, but the mechanics of how he and his fellow crewmen go about putting themselves in the best position to survive their ordeal is fascinating. Their ship is split into two pieces, their ability to control the rudder severely compromised. Yet Sybert comes up with a plan that allows them to steer their half of the wreckage, the building suspense as I watched them do it leaving me breathless in captivated awe.

The other side of the scenario, the one that follows Bernie as he and three volunteers make what most think is a suicidal attempt to reach the SS Pendleton, is also good, if not quite up to the same level. While the stuff on their Coast Guard emergency rescue lifeboat is solid – their attempts to get out of the harbor and into the open sea particularly exciting – it’s the fact this part of the story is juxtaposed with Miriam worrying about her fiancé that sadly brings it down a notch or two. While Grainger does her best, scenes of her character shouting at Cluff, marching into a blizzard pouting as if she were a petulant child, or coming to grips with what it is her beloved is attempting to do as she stands in the den of a single mother who has looked tragedy in the eye and has somehow managed to put the broken pieces of her life back together all ring hollow. It’s maudlin, borderline soapy stuff, adding a layer of saccharine that isn’t necessary.

Even so, Pine is wonderful, the actor allowing himself to be so vulnerable, such an open book emotionally, that it only augments his courageousness as he drives his crew to give all they can to do to accomplish what by all accounts should be impossible. While a hero, Bernie is the converse to Pine’s other notable role as a captain, he of the surname Kirk who asks his crew to go on a five-year mission to go where no one has gone before, and watching Pine look so befuddled as he attempts to romance the confident, intelligently certain of herself Grainger is a joy.

Another plus is the supporting cast that Gillespie has assembled. On the rescue boat with Pine are Ben Foster, John Magaro and Kyle Gallner, while those aboard the rapidly sinking half of the SS Pendleton with Affleck include Josh Stewart, Abraham Benrubi, John Ortiz and a scene-stealing Graham McTavish. All are wonderful, each becoming an almost invisible part of the ensemble, all making an impression but never so much of one they distract from the central mechanics of the story. More, they all ably support Pine and Affleck, granting them the spotlight, only stepping into it themselves when the script allows them the freedom to do so. 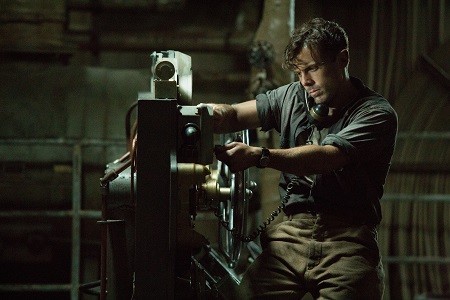 Considering this is based on an actual event, it’s never in doubt what is going to happen to either Bernie and his crew or the majority of those praying for survival aboard the SS Pendleton. Same time, the actual rescue itself is depicted flawlessly, Gillespie handling things with kinetic, viscerally cocksure confidence that’s undeniable. The balance between human heroics and cinematic wizardry is sublime, the whole thing fitting into the Disney inspirational canon with unforced ease.

It’s a pity that the movie doesn’t know when to quit, the filmmakers taking things to a sappy conclusion that feels more engineered by a studio test screening than it does artistic intent. The final moments are manufactured and false, designed to illicit tears and nothing more. Thankfully, the stuff that does work in The Finest Hours is so solid, so deliciously crafted, so splendidly acted this obvious climactic misstep isn’t near as disastrous as it could have been, the film itself still a rousing tale of sacrifice, ingenuity and heroism I couldn’t help but enjoy. 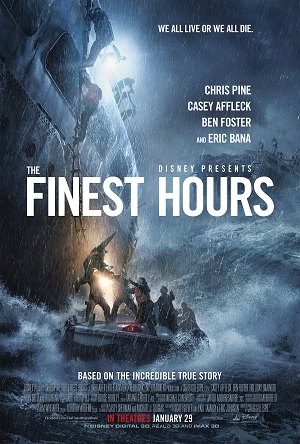