Businessman Tomas (Johannes Bah Kuhnke) is on holiday in the French Alps with his wife Ebba (Lisa Loven Kongsli) and two young children Vera (Clara Wettergren) and Harry (Vincent Wettergren). The first day is perfection, the family having a great time out on the slopes. The second is much more unnerving, as during lunch a massive avalanche makes its way towards their restaurant’s terrace causing patrons to flee in terror.

Turns out their collective fear is misplaced, the avalanche petering out well before it reached the resort doing nothing more than shower those remaining on the promenade in a fluffy fog of light snow. But what it reveals about Tomas, what Ebba and the kids learn about him coupled with what he discovers about himself, that is far more heartbreaking, causing a rift between husband and wife both of them are having a hard time dealing with. 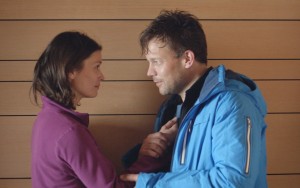 The genius of the Swedish drama Force Majeure is that it never forgets that there is inherent humor and comedy hiding inside pain and dysfunction. As such, writer/director Ruben Östlund (Involuntary) doesn’t let either Tomas or Ebba off the hook, spinning a dexterous, highly captivating web of marital and familial compassion and calamity, each ferociously hand-in-hand with the other. It is an insightful look and the male-female dynamic painting things in decidedly familiar, and altogether human, colors, and as such I laughed, gasped, cheered and cried seemingly with every step this family took during their eye-opening five day vacation.

Everything happens in stages. This isn’t a disaster movie of the normal persuasion, that central avalanche sequence notwithstanding, instead the calamity taking place is all happening inside the human soul, thoughts of what might have been paired with what is actually done, one’s actions during a crisis not always what was intended. The way this effects people, how they deal with the realization that those the care the most about might not be able to rise to the occasion when chips are down, that exerts quite a psychological and spiritual toll, ideas of good and evil, right and wrong, all of them disappearing into the ether as if they never existed.

Loven has a glorious monologue about halfway through during an intimate, impromptu dinner party in their hotel room with friends Mats (Kristofer Hivju) and Fanny (Fanni Metelius) where she finally speaks with striking candor about the film’s central event. She travels through so many differentiating emotions with sudden, striking intimacy, gets her points across with such subtle severity, the overall impact is awe inspiring. It speaks to everything the film has been keeping close to its vest presenting emotions inch by inch, second by second, Loven doing all the heavy lifting and seemingly doing it with bracing, mesmerizing ease.

Bah Kuhnke has his o 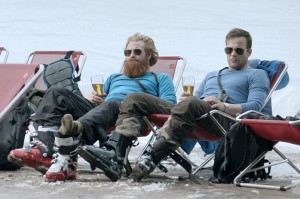 wn signature moments as well, especially a reaction shot of where his perception of what took place is suddenly shattered thanks to a video of the avalanche he himself had the inclination to shoot but had forgotten existed. But there are later beats, single, solitary exhibitions where intention and actuality collide into one another and what Tomas believes this says about himself comes into stark, upsettingly raw focus. Bah Kuhnke managed to make me laugh out loud, forced me to shed a few tears and had me reassessing choices I’d made in my own life at one point or another, all with a self-effacing candor that grew in scope and tenor as things progressed.

In the end, it is Östlund’s script that is the true thing of beauty. He navigates this family’s holiday and their ever-shifting interpersonal dynamics with ease, letting things build naturally and with sublime realism, the comedic elements every bit as important to the eventual outcome as the more traditionally dramatic ones. It concludes with a flurry of events which, almost wordlessly, puts everything into an entirely new perspective, who did what when and why once more in glorious question.

Force Majeure is a marvelous dissection of responsibility, communication and love, everything building to a stupendously ephemeral conclusion where up is down, down is up and everything, and everyone, is exactly right where they need to be. 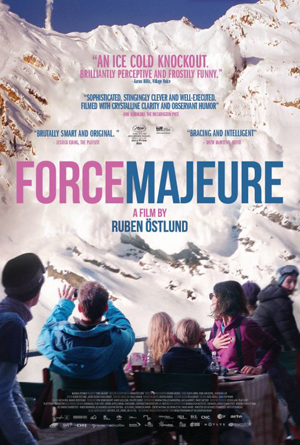