Glitzy Freak Puts On a Heck of a Show

After his free-spirited mother Muv (Bette Midler) sends him to live with his buttoned-up businessman father William (Larry Pine), gender queer Billy Bloom (Alex Lawther) has no clue what he’s walking into when he steps through the doors of his posh new ultra-conservative High School. Immediately labeled a freak, noticeably bullied within the first few minutes of announcing his presence, the confident teenager is determined to make the best of what he realizes is a terrible situation. Managing to make friends with a fellow outcast (AnnaSophia Robb), thinking he’s finally making inroads with the superficial clique led by the frighteningly bubbly Lynette (Abigail Breslin), Billy instead is ambushed by a group of masked students who deliver a horrific beating, star football player Flip Kelly (Ian Nelson) stopping the attack before it can turn deadly. 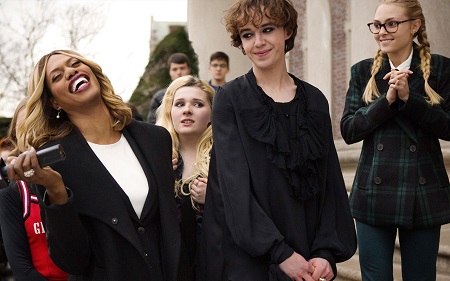 Based on the book by author James St. James, working from a satirically-minded script by Patrick J. Clifton and Beth Rigazio, director Trudie Styler’s festival favorite Freak Show might not break a lot of new ground or go anyplace unexpected but thankfully that doesn’t make this freewheeling opus any less entertaining. Sort of a Mean Girls meets Sixteen Candles meets But I’m a Cheerleader meets Saved! meets The Edge of Seventeen variation with a teen bullying angle that’s uncomfortably timely, the movie is a heck of a lot more engaging than I anticipated it was going to be. The filmmakers manage to maintain a level of dramatic comedic absurdity throughout that’s both humorous and heartfelt, granting the finished feature an emotional resonance that’s somewhat surprising.

The big twist here is that, after recovering from his injuries and trying to fit in with the other students as best he can thanks to Flip’s urging, Billy finally realizes uptight, hate-filled one-dimensional shills like Lynette will never recognize him for who he is as long as he refuses to fit inside her definition of what he is supposed to be. As such, he decides to run for Prom Queen, knowing that by doing so he’ll hopefully become a figurehead for fellow outcasts who for whatever reasons are too scared or apprehensive to come out of the shadows. It becomes a story of forgiveness and understanding, the ultimate reveal being that you can’t expect others to accept you for who you are until you learn to do the same, not just in regards to them, but as it pertains to yourself, as well.

There’s some obvious stunt casting, and not all of it works. While Midler is divine as Muv, other high-profile members of the supporting cast don’t fair nearly as well. I like that there isn’t a big deal made in regards to Laverne Cox’s appearance as a determined television reporter covering Billy’s run for Prom Queen. Still, the actress overplays her hand, if only slightly, a few of her reaction shots feeling moderately false and slightly phony. She makes out better than John McEnroe does as the high school’s mouthy gym teacher, however, and while I respect Styler’s intention to cast the tennis bad boy against type his scenes still lack any sort of intelligent edge that would have allowed them to come off as anything other than pandering and facile.

Just as crucially, I wish there was more in the way of complexity as to how Clifton and Rigazio’s script dealt with Lynette. She’s a shrew caricature of a high school queen bee. She’s Regina George without the intelligent venomous bite, Heather Chandler without the memorably pithy one-liners that shock just as much as they amuse. No, Lynette is a blonde-haired stereotype who never goes beyond doing or saying the expected, her hate-filled diatribes so obnoxiously extreme their power to provoke or offend is sadly nonexistent. More, Breslin looks uncomfortable trying to portray her, almost as if she’s whispering a quiet apology to the audience every time Lynette has to open her mouth and say something hateful about Billy.

All the same, I enjoyed a great deal of what it was Freak Show had to offer. I love the way Styler chose to portray Billy and his situation while at the same time giving Lawther plenty of room to craft the character in a way that is far more complicated and emotionally grounded than I initially assumed he was going to be portrayed. The way in which the young man’s friendship with Flip evolves so organically is just plain lovely, and I liked that there’s never a misunderstanding as to what is going on and that signals aren’t being crossed as far as any romantic possibilities might be concerned. There’s also a terrific moment between father and son that is achieved with an elegant simplicity that’s touching in its quiet intimacy, Billy and William’s familial dynamic developing in a manner that, while hardly original, is still filled with an understated heartfelt warmth that’s luminous.

I must admit, some of the gender-bending stereotypes annoyed me at first, but as things went on I managed to get on Styler’s wavelength in a way that went beyond these well-worn queer film clichés. The director is attempting to sucker the audience in with a little flash and even more glitz only to craftily pull that bedazzled rug right out from underneath viewer right when they least expect it. Freak Show has more to say than initially meets the eye, the face hiding behind the false eyelashes, heavy foundation and glamorous makeup not all that different than our own. 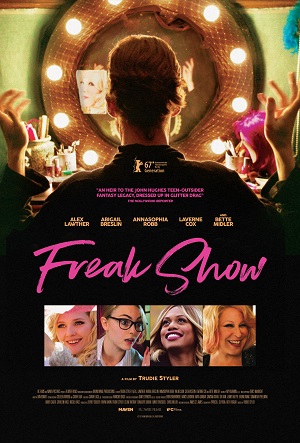